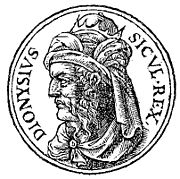 In his Politics, Aristotle observes that diversity resulting from immigration without assimilation was a frequent cause of civil war and breakdown of civic solidarity within the Greek city-states. In this brief article, I would like to highlight how diversity in the use of foreign mercenaries and changes in the population were a frequent tool exploited by Greek tyrants to subjugate the citizenry.

The archetypal example of this was the powerful and diverse Sicilian city-state of Syracuse, which was long ruled by a string of tyrants, making for a useful contrast with the homogeneous and free city-state.  Aristotle remarked: “at Syracuse the conferring of civic rights on aliens and mercenaries, at the end of the period of the tyrants, led to sedition and civil war” (Politics, 1303a13). Furthermore, Aristotle argued that a legitimate ruler was protected by his own armed citizens, whereas tyrants used foreign mercenaries:  “Kings are guarded by the arms of their subjects; tyrants by a foreign force” (1285a16). The use of foreign mercenaries frequently led to rule devolving to a tyrant or a small clique (1306a19).

Aristotle’s observations have largely been echoed by modern scholars. Tyrants were keenly aware of the fact that common identity and civic solidarity were threats to their personal power. Kathryn Lomas observes that “the use of itinerant populations to subvert the status of the polis is common to many tyrants and Hellenistic monarchs throughout the Greek world.”[1] Paul Cartledge observes that Syracuse became:

what Tyranny in essence was: an autocracy based on military force supplied by a personal bodyguard and mercenaries; and reinforced by multiple dynastic marriages, the unscrupulous transfers of populations, and the enfranchisement of foreigners.[2]

There is evidence that the Greeks more widely considered homogeneity to be a source of strength in a city. During the Peloponnesian War, the Athenian political leader and adventurer Alcibiades argued that Sicily would be easy to conquer, because its diversity meant its cities lacked solidarity and social trust. Instead of common civic action, the Sicilians were prone to individual selfish behavior in the form of corruption and emigration:

Sicily may have large cities, but they are full of mixed rabbles and prone to the transfer of populations. As a result no one feels that he has a stake in a city of his own, so they have taken no trouble to equip themselves with arms for their personal safety or to maintain proper farming establishments in the country. Instead, individuals hoard whatever money they can extract from public funds by persuasive speaking or factional politics, in the knowledge that, if all fails, they can go and live elsewhere. A crowd like that are hardly likely to respond unanimously to any proposal or to organize themselves for joint action: more probable is that individual elements will go with any offer that attracts them . . . (Thucydides, 6.17)

Given that Alcibiades made these comments in a successful speech trying to convince the Athenian Assembly to invade Sicily, we can assume such arguments would have resonated with Athenian citizens in general. (In the event, the Athenian invasion of Sicily proved to be a disaster. Nonetheless, as one might expect, the Athenians did find local allies among Sicily’s diverse population, notably among the indigenous Sicels. Sicily’s lack of unity however was not sufficient to make up for the general riskiness of the enterprise, notably due to geographical distance from Athens, and Spartan support for Syracuse.)

In conclusion, the importation and enfranchisement of foreigners, whether by democrats or tyrants, was a common method to subvert the political process, destroy the constitution, and subjugate the citizenry. By hard experience, the ancient Greeks learned that republican self-government is impossible without the solidarity enabled by a strong shared ethno-cultural identity and that an unarmed citizenry watched over by foreign mercenaries is ripe for tyranny.