Recently the right-wing Hungarian government has drafted a new constitution (English translation) which is christened “a constitution for the 21st century”. This constitution is so revolutionary that the European Commission is going to review it because of ‘worrying clauses’ such as the ban on abortion and same sex marriage. “Family friendly, hostile to gays,” as the liberal Euractiv-website dubbed it. Let’s have a closer look of this new constitution and judge it on its merits. 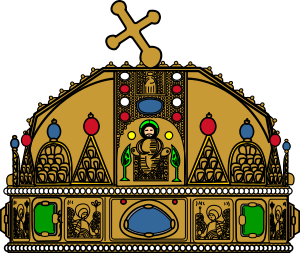 The document states “We are proud that one thousand years ago our king, Saint Stephen, based the Hungarian State on solid foundations, and made our country a part of Christian Europe.” Christendom is called the “foundation of the nation” while the other religious traditions of Hungary are simply “respected.” The new constitution “honours” the Crown of Saint Stephen, which was sent to King Stephen by the Pope in 1000 AD and is regarded as the symbol of national unity.

Besides the beautiful words in the preamble there are traditional Catholic values embedded in the constitution, such as the protection of life “from the moment of conception” and the explicit stipulation that marriage is a union between man and woman. There is also a proposition for voting on the basis of fertility: families with children can vote on behalf of their underage children in order to empower the interest of families in politics. The family is rightly regarded as ‘the basis of survival of the nation’.

The new constitution is also stressing the contribution of Hungary to the defense of European values: “We are proud that this people fought in defence of Europe for many centuries and, through its talent and diligence, has contributed to the enrichment of the common European heritage.” Last year the Hungarian Parliament already rejected a socialist proposal to write punishment for holocaust denial into the constitution. The Hungarian governing party Fidesz, which won a landslide victory in 2010 and has a two third majority in Parliament now, is tipping the balance from collective shame to national pride. And waiting in the wings is Jobbik, a populist Hungarian ethno-nationalist party which has had links to the British National Party. Jobbik polled nearly 17% in the 2010 elections and is the third largest party in Hungary.

The Hungarian government emphasizes that the Hungarians respect the Lisbon Treaty of 2007, but that any further infringement of Hungarian autonomy beyond ‘Lisbon’ should be supported by a two-thirds majority in the Hungarian Parliament and essentially (and rightly) regarded as a change in the constitution of the country. A further sign of Euro-scepticism is the proposal to write into the constitution that the Forint is the Hungarian currency. This is no surprise as the Euro is suffering the greatest crisis since its introduction in 2002.

No conservative in his right mind will doubt the benefit of the new constitution for the Hungarian people: it strengthens the family and promotes self-governance and national pride. In the not so distant past, these values were commonplace in Europe and embraced by the ruling elite. Now the elites have changed and have become dismissive of these values, which it considers old-fashioned and backward.

Hungary is no surprise since they have already proved themselves hostile to Christianity and European identity by issuing a school diary with Jewish and Muslim religious festivals, but completely omitting all the Christian ones.