In addition to my duties as host of The Political Cesspool Radio Program, I serve as a member of the Board of Directors of the Council of Conservative Citizens and American Third Position. 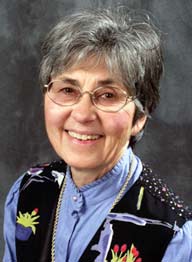 That being said, I am pleased to announce that my friend, Dr. Virginia Abernethy, recently joined Bill Johnson, Dr. Kevin MacDonald, Dr. Tom Sunic, and me as a fellow member of the A3P Board.

Dr. Abernethy is an emeritus professor of psychiatry and anthropology at Vanderbilt Medical School. Her interdisciplinary post-graduate training in anthropology expanded into studies of human population and the interface of culture, population, and the environment. For 12 years, she was the editor of the ecology and social science journal, Population and Environment.

Abernethy is an expert regarding the “Demographic Transition” theory, the idea that fertility rates are automatically reduced with economic or social improvements. Dr. Abernethy is a member of the Board of Directors for Carrying Capacity Network.

Heidi Beirich, of the Southern Poverty Law Center, didn’t approve of Dr. Abernethy’s decision to team up with A3P.

Abernethy, a self-described “white separatist” and emeritus professor of psychiatry and anthropology at Vanderbilt Medical School, has a long history of working with racist groups.

With the addition of Abernethy, the ATP board is now populated by the top tier of American white nationalists. The chairman of the group is corporate lawyer William D. Johnson, and board members include virulent anti-Semite Kevin MacDonald — an academic like Abernethy — and white nationalist radio host James Edwards.

Abernethy, who is also a leading nativist, has had some success in the past pushing her anti-immigrant agenda. In 2004, she was the chief spokeswoman of Protect Arizona Now, a campaign that backed a harsh anti-immigrant referendum known as Proposition 200 in that state. Though her racist background became public before the vote and helped spur the proposition’s denunciation by almost every Arizona newspaper editorial board, the referendum still passed with 56% of the vote.

Abernethy has some other interesting connections. She has held leadership positions in two organizations that claim to work toward a reduction in U.S. population as part of an effort to protect the environment. Though Carrying Capacity Network and Population-Environment Balance portray themselves as pro-environment, both are really greenwashers — groups that use environmentalism as a smokescreen to severely restrict immigration to the U.S.

Partly because of the addition of Abernethy to ATP’s board, the party has become the most serious white nationalist organization in the U.S. It is also growing quickly. In 2010, the party had 10 chapters in nine states.

I’m surprised that the SPLC could take a time-out from attacking the American Family Association long enough to write this article about American Third Position.

Despite all the propaganda and name calling coming from left-wing attack dogs, the mission statement of A3P is fairly simple and straight forward.

The U.S. political system works in favor of the two entrenched, nearly identical Democrat and Republican parties, and against all “third” parties; especially those parties that are pro-American and anti-globalist. Nonetheless, the American Third Position, a new political party, intends to fill a tremendous need in the United States today by providing the leadership and elected representatives necessary to return our nation to its rightful owners — by liberating it from the ‘banksters and gangsters’ who are ruthlessly plundering our American blood and treasure.

If you agree with that mission statement, then I encourage you to check out the American Third Position by clicking here.