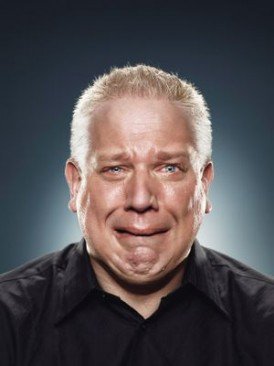 I’m known as a talk show host. That’s what I do.

Part of my duties, however, as host of The Political Cesspool Radio Program, is to keep our blog filled with lots of interesting stories during the week to tide you over until our weekly broadcast airs on Saturday evenings.

As a writer, it could be argued that my magnum opus was an article last year on the infamous Glenn Beck rally in Washington, D.C.

This week, Glenn Beck is at it again.

He delivered the keynote speech at the “Christians United for Israel” summit where he proudly proclaimed that if anyone wants to dehumanize Jews, “then count me a Jew and come for me first.” As if to reiterate his point, he follows up that statement with the exclamation that, “I am a Jew,” even though he certainly is not.

Check out the embarrassing video below, if you can, and pay close attention to the 1:30 – 1:47 mark, the 2:08 – 2:12 mark, and the 2:19 – 2:27 mark. I couldn’t bear to watch it past that point, so if he says anything else that’s equally absurd just note it in the comments section below (Ed.: Its a ringing endorsement of Israel as a besieged state—no mention of Israeli aggression, ethnic cleansing, or apartheid, and it includes a ringing denouncement of Helen Thomas).

Glenn Beck is so repulsive because he is so disingenuous. If he were just a rank and file Christian Zionist that really believed in all that nonsense, then that’s one thing. But you can tell by simply watching him speak that he is bogus.

Frankly, I think he is somewhat mentally ill.

I don’t know if I’ve ever seen him go five minutes on television without employing his fake crying routine. Watching that act could gag a maggot. He kind of reminds me of someone who would have been selling “miracle” elixirs from a gypsy bandwagon back in the day.

All in all, this video takes groveling to a whole other level. He has no honor and no dignity.

And at the end of the day, what does he have to show for such pandering?

Anti-Semitism, like all ideologies, tells a story about the world. It’s a story about almost occult Jewish power, about cabals that manipulate world events for their own gain. In classic anti-Semitic narratives, Jews control both the elites and the masses; they’re responsible for the communist revolution and the speculative excesses of capitalism. Their goal is to undermine society so that they can take over. Through the lens of anti-Semitism, social division, runaway inflation, and moral breakdown all make sense because they all have the same cause. Nazi propaganda called Jews drahtzieher—wire-pullers. They constitute a power above and beyond ordinary government authority. “There is a super-government which is allied to no government, which is free from them all, and yet which has its hand in them all,” Henry Ford wrote in The International Jew.

If you know this history, you’ll understand why Glenn Beck’s two-part “exposé” on George Soros, whom Beck calls “The Puppet Master,” was so shocking, even by Beck’s degraded standards. The program, which aired Tuesday and Wednesday, was a symphony of anti-Semitic dog-whistles. Nothing like it has ever been on American television before.

On Thursday morning, the Anti-Defamation League, which exists to combat anti-Semitism, finally condemned Beck. Earlier, I’d criticized the group for its silence, a change that Todd Gutnick, the ADL’s director of media relations, fiercely disputed. “Sometimes the ADL likes to consider what it’s going to say before it says it,” he said. “In this case we wanted to see the totality of what he was doing on the air before speaking out.”

Reposted from The Political Cesspool.