When you live in a place like Memphis, the local news media (which is owned by and takes its marching orders from the National news media-ABC, CBS, NBC, Scripps-Howard, Gannett, etc.) is constantly fanning the dying embers of the “Civil Rights” movement.

Why? Because the CRM was the one unqualified success of liberalism since WWll. It was the one manifestation which, at least among both mainstream conservatives and liberals, is like Caesar’s wife and is “beyond reproach.”

A case in point is the article, “United in Prayer,” taken from the Monday, August 1 edition of the Memphis Commercial Appeal, our daily fish wrap. The occasion for this article is to focus attention on the unveiling of the new MLK Statue on the National Mall in Washington D.C. next week.

The story features the “iconic” Clayborn Temple, formerly Second Presbyterian Church until 1949 when, as often happens in Memphis, the old neighborhood transitions from White to Black and the White churches sell their facilities to Black churches. Clayborn Temple is “iconic” because MLK and other “civil rights pioneers” used it as a base of operations back in the 50s and 60s.

Clayborn Temple is a stone building, and therefore the only thing that needs to be done to keep it presentable is to keep the roof repaired, but like so many other buildings in the black neighborhoods of Memphis, this didn’t happen and the AME denomination, which owns it, is now offering to sell the dilapidated hulk for $1 million plus, due to its “iconic” status, in hopes that some guilty white liberals will buy it and convert it into yet another CRM shrine.

Right on cue, the GWLs show up, this time a contingent from the now uber-liberal Second Presbyterian Church, the original owners. A gaggle of liberal “church ladies” fighting back tears of guilt and remorse despite the fact that most of them hadn’t been born when the CRM occurred, took to falling on their knees before Black folks at Clayborn Temple to beg forgiveness for the imagined and unspecified “racial sins” of their forefathers and mothers. 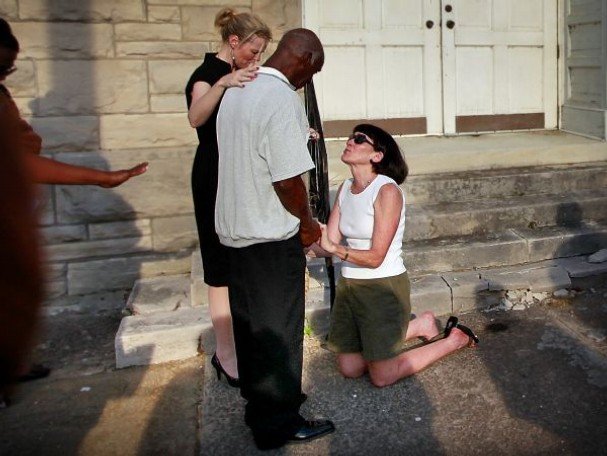 The lady bowing before her master in the picture is Nina Tayloe, a Memphis socialite, a member of the exclusive Memphis Country Club and Second Pres social gospel true believer. The newspaper didn’t chose to run this photo by accident, and the symbolism it represents is disturbing. Remember, if you will, that the CRM was sold to the American public on the assumption that it would usher in a kinder, gentler American society based upon racial equality. If that were the case Ms. Tayloe would be standing and shaking the hand of her Black peer. But as we can see, this isn’t the case. Instead, she is on bended knee before her new racial overlord, begging for forgiveness and apparently resigned to meekly accepting any punishment he chooses to inflict upon her.

This is emblematic of the CRM generally, which pretended to be about racial equality, while moving seamlessly to a regime in which Whites were required to grant preferences like affirmative action and tribute like reparations to atone for the fact that whites used to be in a dominant position socially and legally. As Gomer Pyle said, “Surprise, Surprise, Surprise!” Or, more ominously, as the Black Marxist revolutionary Franz Fanon noted, “The true desire of the slave is not freedom, but rather that he and his slave master exchange places.”

Hold on tight, folks-as the demographics of the U. S. change due to liberal policies like the Immigration Act of 1965, open borders, affirmative action and ever expanding welfare entitlement for minorities, we ain’t seen nothing yet. This photo is a vision of the future unless we wake up.

Here is an excerpt from the actual story that ran in the paper:

Standing near the entrance to Downtown’s Clayborn Temple Sunday evening, Nina Tayloe grabbed the hands of 75-year-old Brown Berry, dropped to her knees and cried out for forgiveness.

“Forgive me,” she said. “Forgive me on behalf of my family for the ugliness of that time … but praise God, we have a beautiful Lord who brings about hope and restoration.”

Berry, a young black man in Memphis during the civil rights movement and sanitation workers strike, nodded his head in acceptance and embraced the 59-year-old white woman.

Before the crumbling steps of a shuttered church closely associated with Dr. Martin Luther King Jr., more than two dozen people — including clergy from Christian denominations across Memphis — gathered at 6 p.m. for a prayer march remembering his legacy.