Holland has seen a slow but steady restriction on immigration since the so-called Fortuyn-revolt of 2002, but the Left is constantly fighting back by bringing up cases of individual ‘asylum seekers’ to gain sympathy from the public. The latest case is that one of the Angolan boy Mauro Manuel. 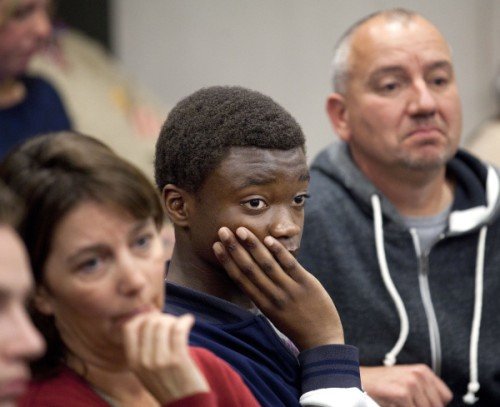 Manuel Mauro was born on November 18 1992 in Angola and as a 9-year old boy he was put on a plane to Europe by his mother. In the beginning he was fostered by his half-sister but after several months he was dropped at a police station where he was registered as an “unaccompanied minor asylum seeker.” In this short description of his life so far we can see all the failings which characterize Black societies: fatherless families, mothers abandoning superfluous children for a new partner and eventually a call upon White institutions to prop the whole thing up. (See also Joe Webb’s current TOO article “Addicted to helping non-Whites“.) Mauro was placed in a White foster family which has raised him as their own.

In many aspects Mauro’s youth mirrors that of Barack Obama. Barack’s father left his mother when he was two, Barack’s leftist mother dumped him at the age of ten in favor of a new partner and he was eventually fostered by his White grandparents.

Since his arrival in Holland Mauro has tried to be classified as an asylum seeker but eventually failed in 2007. Nevertheless he has not given up in the hope that the public will pity him so that the government feels forced to give him a residence permit.

The case has recently caught the attention of the media and the ruling government coalition has been strained by leftist dissenters within the Christian-Democrats. During the national congress of Christian-Democrats on October 29 the dissenters managed to press their case and had the congress adopt the following statements concerning unaccompanied minor asylum seekers:

“A lack of youth in society and the ageing of the population in Holland cause a big concern on sufficient labourers for the future.”

“Absorbing those youthful people in our society will contribute to a better balance between generations.”

This kind of reasoning is astonishing for what is widely considered to be a conservative Christian party. In departing from the sentiments of its voters, it mirrors the path taken by the elites within the Republican Party in the U.S. on immigration. The question is whether White labour can be substituted by Black labour in terms of labour ethos, education and skill. In Germany, where the population is also ageing and the indigenous population is dwindling, Thilo Sarrazin has written a book on this topic and has come to negative conclusions, not only with regard to the contribution of Black/Muslim labour to the economy but also in regard to the welfare system.

Meanwhile the Christian-Democrats are (typically) aiming at a compromise and advocating a study-visa for Mauro since he turns 18 this month. The problem is that a study-visa only can be obtained for study at university-level education and Mauro is currently doing a study comparable to Junior college, a telling sign that Black immigrants are not the high-brow saviours of the West.