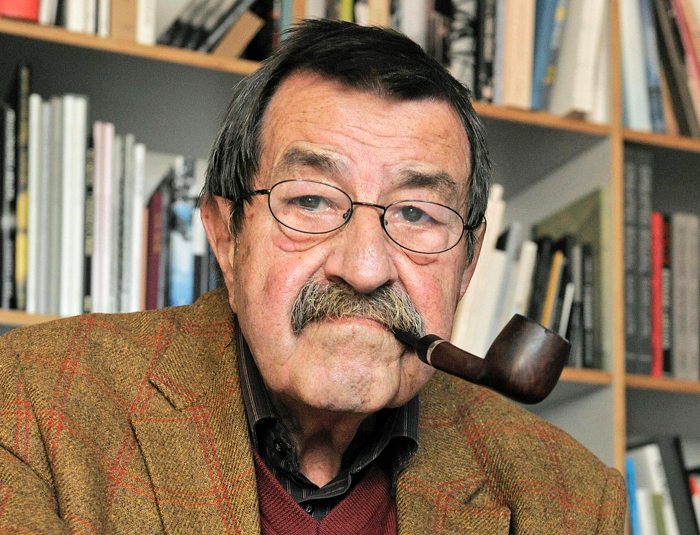 That the power of ideas in the propaganda war is more decisive than the power of bombs has again proved to be true. The academic way of putting it is:  “whoever exerts cultural hegemony will eventually exert political hegemony.” Historically, this has been the case with European politicians who seldom read books, but who love to dine, wine and parade in the company of famous novelists. When push comes to shove the legitimacy of their decision making will be enhanced with the obligatory photo-op session with their country’s famous writer.

Günter Grass, a German left-leaning novelist, a Nobel prize winner, and serving for decades as a moral pillar not just of  the “ antifa Germany,” but of the entire construct named today the European Union, published on April 2 in the influential liberal German daily Süddeutsche Zeitung, a poem with the title “What must be said” (Was gesagt werden muss). In the poem Grass criticizes Germany’s delivery of submarines to Israel and depicts Israel as a threat to world peace.

The day after, all hell broke loose, not just in the German literary and political circles, but also in Israel and in the rest of Europe. Even the Israeli prime minister  “Bibi” Netanyahu, the most feared man in the USA and the EU, felt qualified to comment on Grass’ stanzas.  It’s no surprise that Netanyahu backpedalled from the poem’s literary value and focused instead on the eternal topic of anti-Semitism and Holocaust denial:   “In Iran there is a regime that denies the Holocaust and calls for the destruction of Israel. This comparison says very little about Israel and a great deal about Mr. Grass.”  Here is the poem first, as published in English by the British influential daily The Guardian.

“What must be said”

Why have I kept silent, held back so long,

on something openly practiced in

war games, at the end of which those of us

who survive will at best be footnotes?

It’s the alleged right to a first strike

that could destroy an Iranian people

subjugated by a loudmouth

and gathered in organized rallies,

because an atom bomb may be being

developed within his arc of power.

Yet why do I hesitate to name

that other land in which

a growing nuclear power has existed

beyond supervision or verification,

subject to no inspection of any kind?

This general silence on the facts,

before which my own silence has bowed,

seems to me a troubling lie, and compels

me toward a likely punishment

But now that my own country,

brought in time after time

for questioning about its own crimes,

profound and beyond compare,

is said to be the departure point

(on what is merely business,

though easily declared an act of reparation)

for yet another submarine equipped

to Israel, where not a single atom bomb

has yet been proved to exist, with fear alone

the only evidence, I’ll say what must be said.

But why have I kept silent till now?

Because I thought my own origins,

Tarnished by a stain that can never be removed,

meant I could not expectIsrael, a land

to which I am, and always will be, attached,

to accept this open declaration of the truth.

Why only now, grown old,

and with what ink remains, do I say:

Because what must be said

may be too late tomorrow;

and because—burdened enough as Germans—

we may be providing material for a crime

that is foreseeable, so that our complicity

will not be expunged by any

of the usual excuses.

And granted: I’ve broken my silence

because I’m sick of the West’s hypocrisy;

and I hope too that many may be freed

from their silence, may demand

that those responsible for the open danger

we face renounce the use of force,

may insist that the governments of

free and open inspection of

the nuclear potential and capability of both.

No other course offers help

to Israelis and Palestinians alike,

to all those living side by side in enmity

in this region occupied by illusions,

and ultimately, to all of us.

Iranians of course seem to be today the happiest nation on earth, celebrating the poet’s verve, as is reported by the very pro-Israeli German semi-tabloid daily  Bild under the bombastic title, “Iranians celebrate the mad poem by Günter Grass.”   Earlier, a conservative pro-Israeli German daily Die Welt published a flurry of articles by mainstream German intellectuals, each trying to distance himself by light years from Grass, each striving to outbid the other by flowery commentaries on behalf of the state of Israel.

The New York Times along with other newspapers also brought the story about Grass and his poem—but with little or no demonizing side effects. By contrast, as was to be expected, the influential French liberal daily Le Monde, published a polished French translation of Grass’ poem. More measured than the German media, the French mainstream media, as witnessed by the influential Le Monde, although not friendly to Grass, are at least trying to put things into a wider perspective with less apocalyptic titles, such as “Günter Grass; a committed and controversial author.”

The toned-down approach can seldom be found in the German media, which is still legally a brainchild of the American-Allied  “licensed press “(“Lizzenzeitungen”) established by the American military authorities in Germany in 1947 and obliged to toe the line of exemplary political correctness. And helping to remind the Germans that they can never atone enough for Jewish suffering is the response of the Israeli embassy in Berlin:

What must be said is that it is a European tradition to accuse the Jews before the Passover festival of ritual murder … In the past, it was Christian children whose blood the Jews allegedly used to make their unleavened bread, but today it is the Iranian people that the Jewish state allegedly wants to annihilate.

Unlike Germany, France is now  going through a soul searching process after the recent deadly shootings of 4 French Jews by an Algerian-born French citizen, followed by the mass arrests of dozens of prominent Muslim clerics. Also, unlike the US political class France is far more cautious with its Mideast pro-Israel rhetoric, considering the fact that 10 million residents of Muslim faith, mostly of Arab origin, live on its soil.

The commotion in Europe caused by Grass’s poem may be a significant sign for the future development of public discourse in Europe, which in Germany is enforced by the thought police and drastic legal provisions contained in the Criminal Code, especially in the famed  paragraph # 130. That Grass was once a young member of the Waffen SS, who after WWII began advocating peace, love — and of course the obligatory mantra of “ antifascism”  —  is no longer an issue in Europe, although some newspapers in the USA and Israel are keen to extrapolate his service in the German military as explaining his current behavior. Netanyahu is typical: “For six decades he hid his past as a member in the Waffen SS. So it is no surprise that he defines the only Jewish state as the greatest threat to world peace and opposes it equipping itself with means of self defense.”

It should be remembered that there is not a single European family that did not have at least one of its distant members fighting on the German side during WWII. Out of 1 million Waffen SS in which Grass served, over one-third were young volunteers from Albania to Estonia, from Spain to Ukraine.

The present deluge of critical pieces and disclaimers in the media about Grass is just another make-believe game of deception and self -deception passed over from Europe to Israel and the other way around. For a journalist or an academic, to become a respectable cog in the System, with all its perks, requires absolute love of Israel. Israeli and Jewish academics and opinion makers know very well what is on the minds of Germans and other Europeans. But the charade must go on given the extent of current Jewish power over the Germans and the rest of the West. For over a thousand years we have observed the relationship of Jew and non-Jew in Europe as an exercise in overreaching. The consequences are well known.

The present deluge of critical pieces and disclaimers in the media about Grass is just another make-believe game of mutual mimicry, deception, and self -deception passed over from Europe to Israel and the other way around. For a journalist or an academic, to become a respectable cog in the System, with all its perks, requires absolute love of Israel. Israeli and Jewish academics and opinion makers know very well what is on the minds of Germans and other Europeans. But the charade must go on given the extent of current Jewish power over the Germans and the rest of the West. For two thousand years we have observed the relationship of Jews and Europeans as an exercise in overreaching. The consequences are well known.