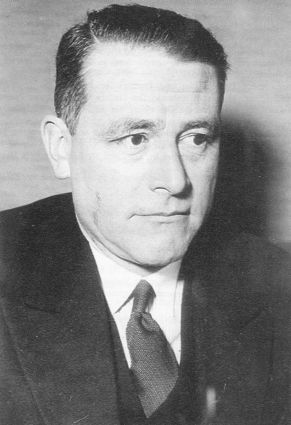 What follows is the English translation of the little known closing speech, given by Prof. Dr. Carl Schmitt at a conference held in Berlin, Germany, on October 3 and 4, 1936. The conference, sponsored by Reich Minister Dr. Hans Frank, was attended by hundreds of German legal scholars, law professors and political scientists, most of them affiliated with the National Socialist regime. The speeches and minutes of the two-day conference were subsequently published in several separate short volumes under the title Jews in Jurisprudence (Das Judentum in der Rechtswissenschaft) and are available in the German language on line.

Carl Schmitt (also Karl Schmitt and Carl Schmitt-Dorotic) was a German legal scholar, philosopher, political scientist and critic of liberal parliamentarianism.  His voluminous writings span the fields of international law, political theory, comparative linguistics, geopolitics, philosophy of history and comparative literature. After WWII, Schmitt, along with hundreds of thousands of German and other European professors, teachers and academics, was subject to the process of “denazification” and was removed from all academic and teaching positions by the American  occupying authorities.

Some contemporary critics consider Schmitt a big time opportunist and “Hitler’s Crown Jurist.” While acknowledging Schmitt’s influence on modern political thinkers, some of his contemporary (mostly Jewish) critics, like Steven E. Aschheim, from Hebrew University in Jerusalem, also note how “Schmitt’s anti-Semitism demonstrates in great and nuanced detail how his anti-Jewish attitudes permeated the very structure and grounds of his thought and categories.” The speech reproduced here clearly shows Schmitt as a completely accepting the National Socialist world view.

Over the last 30 years, however, Schmitt’s works have gained immense popularity, both in the USA and Europe, among leftist, conservative, liberal and rightwing scholars. Recently, most of his work has been translated into English. Of significant academic interest today are Schmitt’s theories on “just vs. unjust war,” on “limited vs. total warfare,” on the “notion of the political” in different political systems and on the “state of emergency.” His theories on the legal status of “terrorists”, “freedom fighters” and “disarmed enemy combatants,” on guerilla and partisan warfare, are debated today by many legal experts, including military establishments and colleges all over the world. ‘C. Schmitt’ is a household name for many nationalist intellectuals and nationalist parties in Europe (see my Against Democracy and Equality). END_OF_DOCUMENT_TOKEN_TO_BE_REPLACED