Last year’s choice for the Nobel Peace prize was a farce of unbelievable proportions. Barack Obama was a newcomer whose name few people had even heard just a few years before. He had no track record whatsoever and had never achieved anything in his life aside from being lucky enough to be the first Black president. He was given the prize “for his extraordinary efforts to strengthen international diplomacy and cooperation between peoples.” Whatever that empty statement means, he has obviously accomplished none of it. US-led wars are still going on in Afghanistan, Pakistan and Iraq, and America’s foreign policy is as hostile as it was towards many countries such as Iran and North Korea, which really pose no threat. Even more ridiculous than the 2009 laureate himself was the awarding ceremony and the associated concert, which was hosted by no one else than pop icon Will Smith! It seems the concert also served as a tribute to Michael Jackson, as a whole bunch of pop stars sang one of his hit songs. This was a culminating moment where Smith’s whole family sang together and his son Jaden demonstrated his dance steps. It is difficult to imagine a supposedly prestigious ceremony reaching such a low.  [The video is here. Jaden Smith can be seen dancing at 1 min 57 sec] 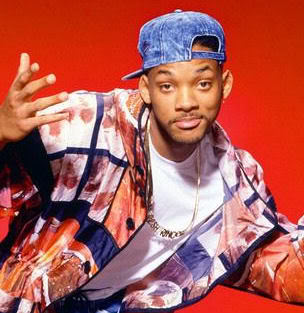 Giving the award to Obama added to a long list of clowns, chosen by these wise men and women in Oslo who are convinced that they know better than the rest of us. The list includes Henry Kissinger who, far from being a peace maker, has supported almost every American military intervention since World War II. The list also includes Holocaust lobbyist Elie Wiesel, buffoons like the Dalai Lama, who represents the West’s inclination for everything “Zen”, and Al Gore, known for promoting global warming and his expertise in massage etiquette.The list also illustrates the Nobel committee’s constant intrusion into the domestic affairs of nations that do not fulfill its standards of political correctness. This is illustrated by its lobbying for the destruction of South Africa — what officially passes, in our post-modern mythology, for the liberation of Blacks from the claws of evil Whites. Albert Lutuli, the leader of the African National Congress (ANC), was awarded the prize in the early sixties while Desmond Tutu, Frederik de Klerk and Nelson Mandela were all awarded the prize in the eighties and nineties. It is worth mentioning that anti-Apartheid activist Nadine Gordimer also received the literature prize. These are some of the men and women who led South Africa to its current situation — of course, all of this painted as a great victory for human rights. Another easy target of this intrusion is Iran and, for that matter, Iranian feminist Shirin Ebadi won the award in 2003.

The Peace Prize is also the only one including a large proportion of recipients from the Third World as of course it requires no achievement by any objective standard. It is all about fitting in with the cultural and political orthodoxy of the liberal West. Kofi Annan and multi-billion dollar organizations like the United Nations have also received the award. This prize is as politically corrupt as the Order of Lenin was in the Soviet Union.

In 2010, the Nobel committee once again turned a deaf ear on human rights issues in the West,  choosing rather to meddle in the internal affairs of China. The prize was awarded to Chinese dissident Liu Xiaobo. The latter was sentenced to eleven years on charges of “inciting subversion of state power.” This wording is almost identical to the various arbitrary charges of “incitement” repeatedly tossed at political dissidents in Europe, such as the charge of volksverhetzung in Germany. While the point of this article is not to make the case for Holocaust revisionism, let us still mention names like Ernst Zündel who spent a total of seven years in prison on such arbitrary charges and his lawyers, Horst Mahler and Sylvia Stolz, who were recently sentenced to twelve and three and a half years respectively on similar charges. In a grotesque display of hypocrisy, German Chancellor Angela Merkel strongly criticized the imprisonment of Liu Xiaobo, stating: “I regret that the Chinese government still massively restricts press freedom.” Nothing could be more contradictory. 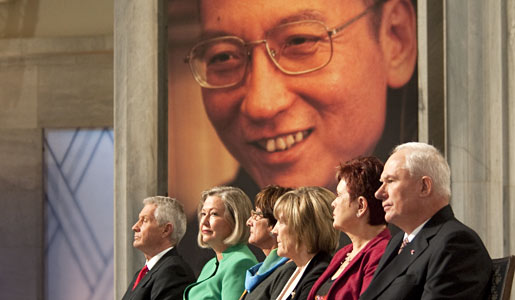 The wise men and women of the Norwegian Nobel Committee stand by their choice at the 2010 Nobel Peace Prize award ceremony in Oslo.

The list of people imprisoned or tried for discussing controversial topics ranging from the Second World War to immigration and national identity is long indeed. For example, Swiss revisionist Jürgen Graf was convicted of Holocaust denial and had to flee his country to avoid imprisonment. He now lives in exile in Russia. European parliament member Bruno Gollnisch (of the French National Front) was given a suspended prison sentence in 2007 for implying in the most trivial way that historians should have the right to debate the events of World War II. He was also stripped of his university position. It is worth noting that he never even denied the Holocaust itself. David Duke was recently arrested for no reason at all in the Czech Republic by a whole armada of police officers while he was talking to a journalist and planned to give a lecture on the Jewish question at a local university. Everyone knows that Duke speaks on controversial topics but he has no history of violence. He was muzzled in the most ruthless and unnecessary way.

Nationalist movements like the British National Party are the targets of constant institutional maneuvers designed to outlaw or sabotage them and in 2004, the Vlaams Blok was successfully outlawed in Belgium on spurious charges of inciting racial hatred. Nick Griffin himself has been repeatedly harassed with criminal trials for “incitement of racial hatred” because of comments made about immigration and Islam. In Austria, politician Susanne Winter was convicted of Volksverhetzung simply for denouncing the “immigration tsunami” sweeping Austria and making a few politically incorrect remarks about Islam. She received a suspended sentence and was ordered to pay 24,000 Euros. Dutch politician Geert Wilders was declared a persona non grata by the British government simply for criticizing Islam while Emeritus Professor Tatu Vanhanen of the University of Tampere (Finland), who is known for his writings on racial differences in intelligence and their socio-economic implications, was investigated by the federal police for “incitement of racial hatred” from 2002 to 2004.

These are just examples taken here and there. The list goes on and on and on. Of course the topics they discuss may be controversial but no one is forced to agree or even listen to them and what is freedom of speech if it is not the right to talk about controversial topics. And where are so-called human rights organizations like the Nobel Committee or Amnesty International when these things happen? They are nowhere to be found, or more precisely, they side with the inquisitors.

Most ironically, the announcement of the 2010 “free speech” Nobel Peace Prize more or less corresponded with the arrest of Wikileaks founder Julian Assange. He was arrested on obviously fabricated charges of rape, designed specifically to obtain an arrest warrant against him. I am not a huge fan of this anarchist, but his case is certainly worth discussing. The charges were brought in Sweden, the archetypical liberal, “open-minded” and feminized therapeutic state. It is enlightening that of all the other lies that can be used to have a political dissident arrested — such as phony accusations of tax fraud — these flimsy charges of rape appear to have been the easiest to bring about. This is a typical trick pulled by women when they want to get even with a man for some reason. The female cannot deny that she had consensual sex with the man, but she claims instead that he did not stop when she asked him. From that point on, it is her word against his and in the now thoroughly feminized legal system, her word generally carries more weight that his. Although it seems obvious that the charges against Assange — which could best be described in Latin as coitus uninterruptus — were ultimately ordered by the US government, it speaks for the dismal state of our politically correct dictatorships when the easiest way to have a political dissident arrested is to resort to this sort of feministic fabulations.

William Davis is a freelance writer