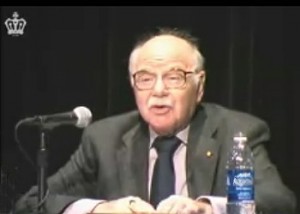 The death of Daniel Bell is another one of those moments when you get a glimpse of how the world works. Writing in Slate, Jacob Weisberg recalls his fond memories of the great man. It’s a totally Jewish reminiscence. As a student, Weisberg wrote a letter to Bell. Bell responded, inviting Weisberg “for a ”nosh'” — “over lox and bagels” as we later find out.

In other words, Bell and Weisberg made a Jewish connection right off the bat. Indeed, Bell lived his intellectual life in pretty much an entirely Jewish milieu. The article mentions Dwight MacDonald, Irving Howe, Alfred Kazin, Clement Greenberg, William Phillips, and Irving Kristol. Only MacDonald was not Jewish, and he stood out like a sore thumb. One writer labeled him “a distinguished goy among the Partisanskies”–a reference to Partisan Review, the flagship journal of the  New York Intellectuals. A New York Times article on Bell’s death, written by Michael Kaufman, also mentions  (in addition to Kristol, Howe, and Kazin) David Brooks, Seymour Martin Lipset, Nathan Glazer and another  solitary distinguished goy, Daniel Patrick Moynihan. When Bell held forth at his Harvard soirees with what Weisberg calls his “yiddishkeit wisecrackings,”  he could be quite confident that pretty much everyone would be on page.

An important theme of Jewish intellectual movements is the guru phenomenon, where Jewish intellectuals are surrounded by adoring acolytes like charismatic rabbis in traditional Jewish society. Weisberg was enthralled by his mentor’s brilliance as he held forth at his residence in Cambridge not far from where he taught at Harvard:

I doubt I’ve since heard conversation of that quality—ranging across political literature, the sociology of intellectuals, and the history of various left-wing splits, all spiced with Yiddishkeit wisecracking. Bell was at once a stunningly original mind, an ironic observer of the scene around him, and a genial gossip. To call his memory prodigious would do him an injustice. …

If I were to revisit the subject of the New York intellectuals today, I’d make the case that Bell, who died this week at the age of 91, was not only the greatest mind in the group but one of the genuinely important American thinkers of the 20th century.

Yes, Bell is right up there with Einstein, Freud, and Boas in the Jewish pantheon of 20th-century intellectuals–adored and promoted by co-ethnics with prominent positions in the media or academic world.

The quote from Bell that always stuck in my mind is this:

“I was born in galut [exile] and I accept—now gladly, though once in pain—the double burden and the double pleasure of my self-consciousness, the outward life of an American and the inward secret of the Jew. I walk with this sign as a frontlet between my eyes, and it is as visible to some secret others as their sign is to me.” Bell concludes that “one realizes that one does not stand alone, that the past is still present, and that there are responsibilities of participation even when the community of which one is a part is a community woven by the thinning strands of memory.” (Bell 1961, 477, 478).

On the surface, Bell seems like a White American, right down to his inconspicuous and not-at-all Jewish last name (changed from Bolotsky when he was 13). (Here’s another Daniel Bell, a swimmer from New Zealand.) 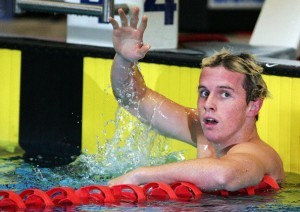 But he relates to others primarily on the basis of whether they are Jews. A letter from Jacob Weisberg is treated very differently than one from someone with a goyische last name, and it’s only natural that they nosh over lox and bagels.

On the other hand, when interacting with a non-Jew, Bell poses as a secular intellectual, someone who’s “just like you” –someone who is dispassionately grappling with sociological questions.  But all the while, he is aware that he is part of a historical community to which he bears a responsibility. This responsibility subtly informs his writing, with the result that the New York Intellectuals generally accepted the entire assault on the traditional people and culture of America, particularly non-White immigration and the proposition nation idea. This despite the fact that many of them came to define conservatism as the neocons displaced earlier conservative thinkers.

It’s a story that’s repeated over and over again, as much now as it was when Daniel Bell made his mark in the American intellectual community.