Michael Colhaze’s recent Wikileaks Leaks article highlighted a growing rift within the global Jewish community, with the “Heebies” and “Izzies” increasingly at odds over strategies, tactics, and even goals. Shortly after that post was published, the Egyptian protests have blown that rift wide open, making it more apparent than ever. This dichotomy between Diaspora Jews and Israeli Jews is the single greatest fault line in the Jewish world. Given their out-sized leverage and influence, it’s perhaps the most consequential political fault line in the contemporary world.

This rift within Jewry is as old as the Group Evolutionary Strategy itself. In traditional Eastern Europe, there was an insular core of ultra-religious Jews in shtetls who spent most of their time studying the Torah, as well as a subset that interfaced with the non-Jewish population. From the moneylenders of yesteryear through the Madoffs of today, this small core of wealthy and worldly Jews have played a pivotal role in supporting the reproductive core of inward-looking Jews, resulting in a two-pronged reproductive strategy where one component is highly fertile and the other has low fertility and high-investment.

The same basic pattern has replicated itself on a global scale — with Israel emerging as a sort of sovereign globo-ghetto. and the Jewish communities of Western Europe and America becoming vast reservoirs of wealthy and worldly Jews who are a substantial component of the financial, academic and media elite throughout the West. Both sub-communities have been more successful than ever in the wake of WWII, but they’ve been growing increasingly alienated from one another.

Within Israel, what was ostensibly the humble pursuit of a Jewish homeland has metastasized into a worldview and political agenda that is imperial and explicitly supremacist. Meanwhile, the Jews scattered throughout the nations of the West have become secular and barren exemplars of the leftist counterculture that is hostile to the traditional people and culture of America and the West. They’re too smart to believe in their God, too busy to visit the synagogue and go through the motions, and disinclined to marry among their own. They’re choking on the vices of Marxism, atheism, humanism, and liberalism — eating their own dog food. Their way of life is unsustainable, but they are a very large component of the elite throughout the West, and they use their elite status, among other ways, to support their more traditional brethren in Israel. 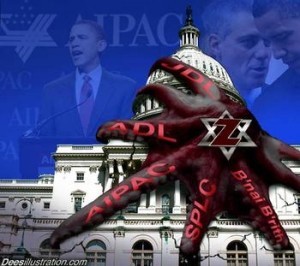 The Diaspora Jewish community is under long term pressure as the natural checks that hold Tradition in place are removed. Devoid of hormesis, America’s Jewish community faces a “Silent Holocaust” that poses a greater existential threat than the other one — a major theme of John Glad’s recently published Jewish Eugenics. There’s little if any real anti-Semitism to scare them back into the herd. The rabbinate is helpless against the temptations of modernity, sounding increasingly shrill and out-of-touch in the contemporay Western world.

What we’re seeing in Egypt and what we’ll see much more of in the future is the growing tension between Israel’s Imperial Jews and America’s International Jews. The Egyptian situation pits Israel’s parochial interest in propping up a dictatorship against American Jewry’s romantic embrace of the revolutionary democratic spirit. It forces the Jews to choose between what’s good for Israeli Jews and what’s good for American Jews, splitting the “What’s good for the Jews?” equation that traditionally united them. Within American politics, this will play out along partisan lines, with a GOP dominated by a small outpost of Zionist Jews allied with Christian Zionists pitted against the Democrats dominated by a large and growing reservoir of idealistic “JINOs” who see Israel’s aggressive realpolitik as an affront to their “open society” shtick, one that threatens to fuel anti-Semitic sentiment among their non-Jewish neighbors. 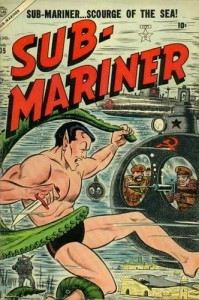 The tentacles grow back!

The tentacles are revolting against the squid–a point repeatedly made by Jewish writers like Philip Weiss and Peter Beinart. They would have already done so over a generation ago, but the myth of the Holocaust has served as a substitute religion for secular Jews for the past several decades. Generations of American Jews have defined their identity through a sense of victimization pegged upon their interpretation of this recent historical event. The typical American Jew doesn’t live in fear of transgressing God’s covenant. He lives in fear of “Nazis”. His nightmares aren’t filled with angry Palestinians, but with fascists and furnaces. He sees the world fundamentally from the standpoint of the Jews as a Diaspora people. The marriage between Imperial and International Jews has a few decades of time before their imminent divorce. The last Jews who actually remember the concentration camps are dying of old age, and the relevance of the Holocaust is dying with them. The fog of collective guilt over the West in general and the German people in particular is lifting.

The global credit crunch that’s triggering global unrest couldn’t have come at a worse time for Israel. America’s in no situation — politically, militarily, or economically — to assist Israel with Egypt. While the protesters in the streets of Cairo are correct in asserting that America’s foreign policy in the Middle East is controlled by the Jews, American Jews are becoming an independent voice that’s increasingly defying Israeli prerogatives. They have far more wealth and influence than their Likudnik cousins in Zion and can be decisive in curbing Israel’s imperialist appetite…in the near term. In the long term, having a superior evolutionary strategy is more important than having wealth and influence. Cosmopolitan Jews exist to serve the Orthodox Jews. If they rebel against that function, then they’ll negate their reason for existing, fading into the background of history within a few generations.