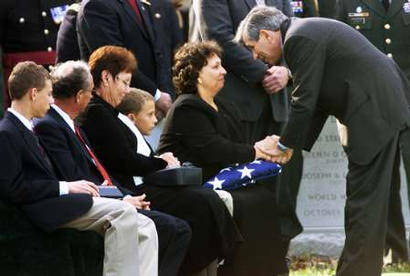 With the American campaigns in Afghanistan and Iraq about to have their 10th and 8th anniversaries The Jewish Daily Forward has published Profiles of Our Fallen By Maia Efrem February 09, 2011. This is a series of profiles of the “37 American Jewish Service Members Who Died Fighting in Iraq and Afghanistan.”

Like all similar collections — of which the English-speaking nations have generated far too many in the last century — this article offers a powerful combination of pathos, gallantry and drama. No one with sons can read it unmoved.

But being moved is exactly the wrong way to approach thinking about these weird public policy disasters. Viewed objectively the article is analytically useful. The Forward says

The Department of Defense reports that, as of February 7, 5,775 members of the U.S. armed forces have been killed in these theaters of war.

This means that 0.64% of the American dead in the “War on Terror” were Jewish. How many Jews there are in the United States is not something the Census has been allowed to investigate for many years — Wikipedia says 2.1%, some guess 2-3%. [Within two hours of posting this blog, the Wikipedia entry was edited to claim that Jews only constitute 1.7% of the US population.]  But in any case Jewish losses in a cause the NeoConservative wing of the community at least ringingly endorses is at best only a third, perhaps a quarter or less, of their population proportion. [Editor’s note: the theme of Diaspora Jews being underrepresented in combat is a common theme of anti-Jewish attitudes — seen, for example, in Alexandr Solzhenitsyn’s account of Jews in the Soviet military in WWII.]

As one would expect, a fair number of the 37 came from mixed marriages. Not untypical of this was one of the two women killed: Airman 1st Class Elizabeth N. Jacobson

Though not observant, Jacobson decided to declare her religion out of respect for her Orthodox father, David Jacobson

One of them is black. Three of them were born in the former Soviet Union and one in Israel, perhaps inheriting the different attitude to the military in those societies.

Motives clearly did include the enthusiasm and romanticism of young men. The magic of the USMC was at work: no less than ten were Marines.

The story of Lance Cpl. Jeremy M. Kane is meaningful;

When Kane decided he wanted to join the Marines, his parents were against it. “I told him I would have felt different if he had decided to join the Israeli army…. Jeremy said that we were all fighting the same war,” his mother told the Forward. Kane enlisted on September, 11, during his freshman year of college and, knowing how angry they would be, it took him three weeks to tell his parents.

In the comments thread, one “Binyamin in O” made himself spectacularly unpopular by posting

The stark truth is that Jewish Americans are underrepresented in the U.S. military, and over-represented in the ranks of the right wing war-mongerers who are urging our country into a clash of civilizations with the Moslem world

And subsequently adding amidst the uproar

I should have added to my post above that I greatly admire the courage of these fallen Jewish Americans, and it is heartbreaking to see their young faces…To truly honor them, we should resolve that we will struggle to reverse our nation’s policy in the Middle East. That means, first and foremost, stopping our support for the apartheid regime in Israel. (The only beneficiary of our war in Iraq has been Israel — the largest army on the planet opposed to Israel was destroyed)… It is simply a fact that the pro-Israel lobby in this country has a stranglehold on our Mid East policy. It is clear that Israel has carried out a de facto annexation of the West Bank, and has turned Gaza into the world’s largest open-air prison camp. This just can’t be reconciled with democracy. Until the Palestinians have freedom, we should distance ourselves from Israel. Otherwise, we are going to be drawn into war after war. The pro-Israel lobby is every day calling for war against Iran. They want another surge in Afghanistan. I say no more blood of American soldiers (Jewish or gentile) in support of Israel.

One has to be impressed that The Forward has let this post remain.