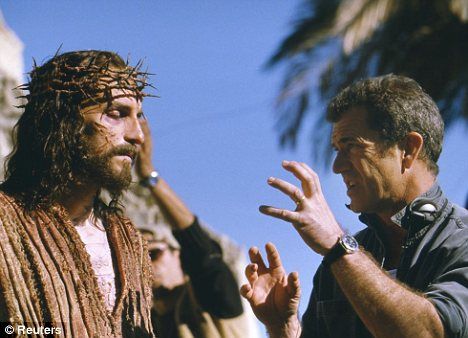 Hollywood is nothing if not vengeful. Jim Caviezel, star of Mel Gibson’s The Passion of Christ now claims that he has been blacklisted. He also says that Gibson warned him about what would happen if he took the part:

‘He said, “You’ll never work in this town again.” I told him, “We all have to embrace our crosses”.’

Caviezel, a devout Roman Catholic, seems to possess a rare idealism on behalf of his religious commitments. His decision to star as Jesus doubtless cost him millions.

To this day, the mainstream regards the Hollywood blacklisting of the 1940s and ’50s as an absolute horror:

Jewish media figures who were blacklisted because of Communist affiliations in the 1940s are now heroes, honored by the film industry, praised in newspapers, their work exhibited in museums. For example, an event commemorating the blacklist was held at the Academy of Motion Picture Arts and Sciences in October 1997. Organized by the four guilds, …  the event honored the lives and careers of the blacklisted writers and condemned the guilds’ lack of response fifty years earlier. At the same time, the Writers Guild of America has been restoring dozens of credits to movies written by screenwriters who wrote under pseudonyms or used fronts while blacklisted. Movies on the topic paint a picture of innocent Jewish idealists hounded by a ruthless, oppressive government, and critics like Bernheimer (1998, 163-166) clearly approve this assessment. In the same vein, the 1983 movie Daniel, based on a novel by E. L. Doctorow and directed by Sydney Lumet, portrayed the conviction of the Rosenbergs as “a matter of political  expediency. The persecution is presented as a nightmarish vision of Jewish victimization, senseless and brutal” (Bernheimer 1998, 178). [See here, p. 39.]

But don’t expect any angst about modern day blacklisting of true idealists like Caviezel carried out by Hollywood with no government pressure at all. Indeed, it is well known that overt Christians and conservatives are blacklisted in Hollywood.
This ability to create real economic consequences for people who have attitudes they don’t like is a huge source of Jewish power. And of course, it’s part of a wider pattern in which people who get off the reservation on a whole range of issues, from immigration to White identity, to criticizing Israel or commenting on Jewish influence in the media or elsewhere, find that their prospects in life suddenly take a very sharp turn for the worse.
https://www.theoccidentalobserver.net/wp-content/uploads/2018/06/TOO-Full-Logo-660x156-1.png 0 0 Kevin MacDonald https://www.theoccidentalobserver.net/wp-content/uploads/2018/06/TOO-Full-Logo-660x156-1.png Kevin MacDonald2011-05-02 16:05:072011-05-02 16:05:07Jim Caviezel Victimized by Hollywood Blacklisting
98 replies