Last year on the Fourth of July I went to a local Tea Party rally. As usual, the crowd was all White–a case study in implicit Whiteness. But one of the speakers stood out because she was Black–the only Black person in the crowd. Eager to show their anti-racist credentials, they applauded her enthusiastically. These middle-class White folks were open to opposing illegal immigration, but no speaker dared to comment on legal immigration. 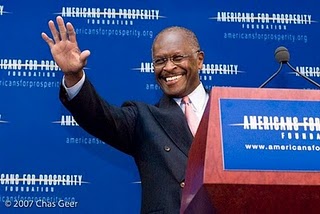 Reading today’s LA Times I couldn’t help noticing Jonah Goldberg’s comment that Herman Cain, the Black businessman and Republican presidential candidate is a “rock star” among the Tea Party crowd. I assume it’s the same logic. What could be better than having two Black major-party candidates square off in the 2012 presidential election? Could there be any doubt that White Americans are good people after all? So much for all that media talk that the Tea Partiers are nothing but a bunch of White racists.

A Southern friend of mine said that his White acquaintances supported Cain because of his stand on immigration. But when it comes to immigration, Cain is completely within the respectable conservative mainstream, opposing illegal immigration while proudly asserting that “Americans have embraced their role as the world’s premier ‘melting pot,’ welcoming immigrants from every corner of the planet. We readily learn about other cultures, customs and beliefs. We appreciate those who are willing to come to this country and make America a more vibrant and enriched place.”

So the real reason these Southern White conservatives support Cain is because he’s Black. A pathetic commentary on the  state of White America.

Incidentally, the purpose of Goldberg’s column is to promote Paul Ryan so that the 2012 election is a referendum on Ryan’s budget  plan. I can’t help thinking that this is an excellent way to divide White voters. Older people are a major Tea Party constituency but probably would be very doubtful about changes to Medicare or Social Security. (AARP opposes Ryan’s plan.) In the end, quite a few would vote for Obama when the Democrats scare the bejesus out of them by talking doom and gloom over Ryan’s ideas on the budget.

The sad reality is that whoever the Republican nominee is, the election won’t be fought out over the demographic future of the United States. That’s an issue that will be left undiscussed but lurking in the background even though it is doubtless a major source of the Tea Partiers’ anger. But at least the horrifying accusation of White racism won’t be heard either.