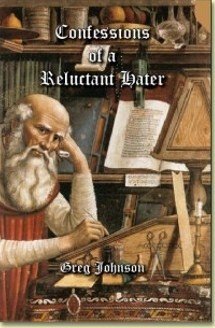 Greg Johnson is a radical, an elitist, perhaps even a dreaded “vanguardist”. He doesn’t waste what little patience he has on the myriad schemes concocted by White Advocates to compromise our goals, water down our message, or conceal our agenda. His debut book, Confessions of a Reluctant Hater, is ostensibly “some of [his] more introductory and topical essays and reviews, pieces that might be useful for people just beginning to explore White Nationalism.” While it makes progress toward that familiar objective, it stands out from the pack of primers by persuasively arguing our side without meeting the reader half way.

Dr. Johnson intuitively understands what it took me years to figure out: that bourgeoisie respectability and our survival are at this point integrally incompatible. In this inverted world where our opponents control every last institution which rewards “respect” and popular approval, one can either be respectable or honorable. One cannot be both. In the article, The Persecution of American Renaissance, he dismisses the the system’s legitimacy with the naked contempt it’s earned:

Whenever some Third World dictator cancels elections, shreds a constitution, or persecutes his political opponents, we all know what is happening. Given the choice between preserving the legitimacy of the system or preserving personal advantage, he chooses personal advantage and discards the props of legitimacy as just that: meaningless props.

This article was in response to the first cancellation, with his thesis proving prescient in light of the exceedingly ham-fisted efforts to silence dissent the following year. Given the government’s declaration of a “state of emergency” in Memphis, the mayor’s meddling in Charlotte, and the flat refusal to pursue the leftist terrorists who made threats, the notion that our troubles are merely due to private venues exercising their right of association by refusing to do business with us can and should be dismissed as the “meaningless prop” that it is.

Those who hold out hope that change can be wrought through working within the system will give up sooner or later, and Greg Johnson will be there for them when they come around. When they arrive, this “hater” will lull them even deeper into radicalism with the sobering reality that even universal appeals to reciprocal ethnic separatism and self-determination are unrealistic, unworkable, and insufficiently radical:

If the San Francisco bay area were turned into an Oriental enclave, I have no doubt that, after a brief and brutal spasm of ethnic cleansing, it would be controlled by the Chinese, and that in a matter of years it would become a huge Red Chinese colony and military base, complete with nuclear weapons, on the west coast of the North American continent. The Chinese would then be in a position to seize new territories either through nuclear blackmail or outright aggression.

If there were a New Israel on the North American continent (no doubt on the East Coast), it would lessen direct Jewish power over Whites, but it would not stop the Jews from broadcasting filth and promoting decadence among us. Furthermore, why provide the Jews with another sovereign territory from which they can plot their global swindles and to which they can flee when their victims rise up against them?

Finally, unless we located New Palestine right next door to New Israel, I would predict that the Jews of Israel would move en masse to New Israel, complete with their nuclear, biological, and chemical arsenals with which they could blackmail us. After all, New Israel would be far safer. The present Israel had to be wrested by force from its inhabitants, whereas under the New Israel scheme, the inhabitants of the US would take a portion of the continent conquered and civilized with the blood, brains, and brawn of their kinsmen, indeed one of the most valuable portions–and give it away to the Jews, who deserve anything but a reward for their parasitism and nation-wrecking.

A black ethnostate on the North American continent would quickly follow the course of every other black state. The civilization built by Whites would fall into ruin in the hands of blacks, who lack the intelligence, initiative, foresight, and moral character needed to create or sustain it.

Once ceded to Blacks, whole states of the defunct US would become a vast Detroit. Depending on where the borders would fall, we would see magnificent cities like Savannah, Charleston, and New Orleans turn into burnt-out wastelands. There would be chaos, slaughter, civil war.

Horrified and soft-hearted Whites would open their wallets to feed starving children and open their borders to pitiful refugees, and we would be right back where we started.

Eventually a dictator would emerge, a cannibal statesman like Idi Amin or Emperor Bokassa, who would become a natural ally of New Israel or the Red Chinese, or both, in putting the squeeze on Whitey.

A similar course would be followed by Aztlan. Southern California and the Southwest would become just like the other filthy, impoverished, corrupt, violent, backwards, Spanish-speaking, Mestizo nations in this hemisphere. Then its residents would sneak across the border into the White homeland looking for jobs and handouts.

Although in the long run, Aztlan’s interests would conflict with those of the Red Chinese, Blacks, and Jews, in the short run they would be natural allies in looting and dispossessing Whites.

And why wouldn’t they?

I don’t know why they wouldn’t. Separatism may be a part of the solution to our problems, but Johnson knows better than to see it as the panacea it’s often upheld to be. While this book is consistently written in an accessible manner suitable for the uninitiated reader, his biting wit is sure to pop every bubble of unwarranted optimism in his path. In response to an optimistic article by Pat Buchanan suggesting the Tea Party movement may save the Republic, he responds pointedly: “But I have read The Death of the West, so I know better.”

A couple weeks ago, I interviewed Greg Johnson on my weekly podcast, Radio Free Indiana, to discuss the book. While we covered several topics, he truly came alive when he tore into the Ron Paul phenomenon and the White Nationalists who’ve been swept up in it.

Greg Johnson is no “introductory” White Advocate and there are probably better books to hand to flat-footed persuadable friends and relatives. But serious and mature advocates who are struggling to arrive at the root causes and practical solutions will benefit immensely from Greg Johnson’s relentlessly skeptical and uncompromising perspective. I say “skeptical” instead of “cynical” advisedly, as he’s very much a “happy warrior”, one who can win a staring contest with the abyss of despair because he’s firmly rooted in the first principles of Europe’s nascent New Right. Even Racial Preservationism itself comes under his microscope in his vexatious article, Is Racial Purism Decadent?

This article is perhaps the very last one I would imagine offering to an uncle or co-worker to consider if I were attempting to persuade him to our position. It’s a devastating critique of the contemporary White Nationalist movement, one which pounds at the ideological foundations of our cause with a hammer and only offers a cursory nod in the general direction of progress after leaving the prevailing platitudes in ruins:

White nationalists love sobering facts, so let’s begin with one. The White nationalist movement, which seeks the salvation of nature’s fairest and most talented race, is less capable of motivating real world activity than Star Trek, a silly but entertaining set of movies and TV shows about multiracial and miscegenating liberals who live in Tupperware, dress in pajamas, and fly around the galaxy preaching high-minded, hypocritical twaddle about tolerance and pluralism and diversity. 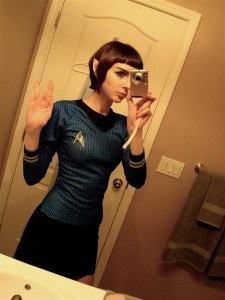 Is White Nationalism Sexy and Forward-Looking?

Even if we correct for the differences in the size of audiences, Trekkies accomplish more in the real world than an equal number of White nationalists.

With this in mind, ask yourself who is more likely to preserve the White race: (1) the present White nationalist movement, or (2) a group of kooks who, taking Tolkien as their bible, decide that through eugenics, they are going to mold every successive generation of their progeny closer to the archetype of the elves: the fairest and wisest race?

In essence, Doctor of Philosophy diagnoses the current movement with the terminal condition of lacking the animal vitality necessary to inspire progress. We are assuredly a cult of crypt keepers, and we assuredly fail to infect those around us with the right kind of enthusiasm. While few of us lack the clarity and sincerity necessary to admit we’re a band of disgruntled haters, Dr. Johnson steps up and confesses it. Confessions of a Reluctant Hater is an excellent and necessary read for pro-White intellectuals, but it leaves us with more difficult questions than we started with.

A follow-up is in order.

For a limited time, readers of The Occidental Observer can save 5% off the retail price of Confessions of a Reluctant Hater at Lighthouse Literature by using the coupon code TOO. Lighthouse Literature is hosting three free sample articles for the potential customer’s consideration. My radio show interview of him is available at Voice of Reason. While some of Greg Johnson‘s best articles are published at this site, one can find more of his articles and more articles from like-minded thinkers over at his Counter-Currents Publishing website.