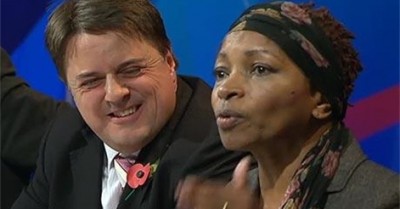 Across Europe ethno-nationalist parties have been making considerable gains, but in Britain, one of the countries most threatened by mass immigration, multi-culturalism, and the liberal fascist thought crime legislation needed to maintain this unnatural state, the main ethno-nationalist party, the BNP, has been failing miserably.

In recent months, the party’s vote has dropped dramatically in every election, and it has even been humiliated twice in a row by UKIP, a civic nationalist party, in former party heartlands such as Oldham and Barnsley. What makes this so tragic is that for a few years in the last decade the BNP was the rising force in British politics. Led by Nick Griffin, the party weathered everything the establishment could throw at it and made one breakthrough after another.

In 2006, the party won 12 seats in elections for Barking and Dagenham London Borough Council, as part of widespread gains in other council elections. In 2008, Richard Barnbrook, the leader of the BNP group in Barking, was elected to the London Assembly. Then in 2009, Andrew Brons and Nick Griffin were elected as Members of the European Parliament.

Naturally, such success led to an intensive campaign against the party that included the usual media demonization, refusal by other parties and politicians to share platforms with the party, physical intimidation by the fascist Unite Against Fascism (sic) group, legal attacks on the party’s constitution and membership rules, and other underhanded tricks.

It would be easy to blame this massive anti-BNP campaign for the BNP’s stalled progress and recent losses but the evidence suggests otherwise. One of the keys to the BNP’s earlier success was the fact that it was seen as an outsider party by the large segment of the electorate who are deeply disenchanted with mainstream British politics. The attempt by the political establishment to marginalize and ostracize it therefore helped rather than hindered the party.

It is noteworthy that its greatest breakthroughs occurred after vicious, non-political attacks on the party. In 2004, Griffin and Mark Collett, Director of Publicity for the Party, were charged under Britain’s Orwellian thought crime laws of stirring up racial hatred after they made some run-of-the-mill comments about Islam. During the almost two-year legal case, which ended when the pair was acquitted in early 2006, the party continued to gain support.

Likewise on 18th November, 2008, Wikileaks published a list of over 10,000 BNP members, which included names, addresses and other details, in what was a clear attempt to intimidate members and those thinking of joining the party. BNP members have frequently been physically attacked or sacked in the past. Despite this, a few months later the party made its biggest breakthrough, gaining its two seats in the European Parliament.

The attacks by the establishment clearly backfired, so why has the BNP gone into decline? The evidence suggests that the main reason is that its greatest asset in the past, Nick Griffin, has turned into its greatest liability. Make no mistake about it: Griffin’s contribution to the rise of the BNP was massive. Before him it was still mired in neo-Nazi street politics. Griffin realized that, in order to grow, the party had to appeal to ordinary British voters with common sense policies that appealed to their natural sense of ethnic identity and survival. Under Griffin the party improved its image and became more media savvy. Instead of fighting street battles with leftist thugs or indulging in holocaust trainspotting, the party concentrated on improving its image and connecting with voters concerned about the disastrous direction the country was headed in.

But anybody closely watching the party over the last few years, will realize that Griffin has now become the main problem and, as long as he remains Chairman, the party will continue to stagnate, shrink, and die. This is because Griffin has disastrously adapted Louis XIV’s old aphorism “L’État, c’est moi” (“I am the State”) to the running of what is still, unfortunately, a minor British political party.

Griffin’s main weakness is the way that he antagonizes other members of the party and attempts to crush all opposition, usually accusing opponents of being traitors, plants, or spies. Fomenting such an atmosphere of paranoia also helps Griffin retain almost dictatorial control over the party. At present the party’s constitution gives the Chairman sweeping powers.

Given past attempts to infiltrate and sabotage the party, such powers may even be justifiable, but they have clearly been used against members whom everyone knows are sincere nationalists, people like Richard Barnbrook, Mark Collett, and Eddy Butler, the former head of the Elections Department who was widely credited with boosting the party’s ability to get out the vote. Last year Butler challenged Griffin for the leadership, but after failing to get the required number of nominations, he was expelled from the party for breaching its code of conduct, including section 12, which reads:

The spreading of false or malicious rumours shall be considered an offence against this Code of Conduct. So too shall be the deliberate causing of disruption to the working of our Party.

With the Chairman deciding what are false or malicious rumours and from whom they originate, this means that Griffin effectively has the power to expel anyone from the party anytime he likes. Such draconian power, if used extremely sparingly would be tolerable, but there is no indication that Griffin has the requisite magnanimity. Collett and Barnbrook have also been kicked out of the party. Their offence? To have sided with Butler.

The expulsion of key members and the disaffection of large parts of the party’s activist base under Griffin’s recent leadership have effectively hamstrung the party. Some have even said that Griffin is in effect the establishment’s most effective plant. My own view is that Griffin is a sincere nationalist, but that the pressures of leading the BNP have made him increasingly paranoid, while the habits of power are too engrained for him to willingly relinquish them.

Recently a new challenge to Griffin’s leadership has been launched by his fellow MEP Andrew Brons, who is campaigning against Griffin on five main points:

Brons is seen as the unity candidate, who wishes to recognize both Griffin’s past contribution to the party as well as the concerns of Griffin’s strongest critics. This is a role for which the well-spoken and magisterial former college lecturer is well suited. The important date is 26th of June, when a General Members’ Meeting will be held to decide the method by which the leadership election will be contested, but already Griffin seems to be up to his old tricks, aimed at keeping him as captain of a sinking ship.

Because of the threat of organized acts of violence by groups like the UAF, BNP meetings are always held at undisclosed locations with members showing up at a re-direction point where they are given directions to the venue. Griffin and his cronies have decided to hold the meeting near Liverpool, because this is one of the main Griffinite power bases. But the re-direction point will only remain open until 10.00 a.m., making it extremely difficult for members from the South, the East Midlands, the North East and Scotland to arrive at the re-direction point on time, a move designed to filter out opponents. There is also the chance that the quality of the directions may vary between those Griffin thinks are loyal to him and those he suspects of being his opponents.

If Griffin manages to defeat Bron’s leadership challenge, then there is every chance that some flimsy excuse will be found to expel Brons from the party in the same way that Butler was. If that happens then, Griffin will be unmistakably revealed as the cockerel that prefers to remain on top of a dunghill, rather than an effective leader of a party whose future success is vital to the survival of the British people.

Colin Liddell is a Tokyo-based journalist. This article was previously posted at AltRight. Reposted here with permission.