In a sense, Anders Breivik’s killings were a form of vigilantism, as are almost all killings conducted outside the apparatus of the State. To illustrate my point, we go back to Weather Underground member, David Gilbert, talking about his decision to turn to violence:

Our movement had come about thinking we could shake the moral conscience of America….But painful experience had taught us that there was an entrenched power structure which profited from and systematically enforced oppression. We could not make a dent in the overwhelming social violence of the status quo without coming up against that power structure. (In Dan Berger, Outlaws of America, p. 44)

One could easily envision Breivik making the same exact justification for his decision to turn to killing. Both Breivik and Gilbert killed outside the mechanism of the State, but one is looked at as a sort of hero of the left and intellectual circles, while those same members would view Breivik as a monster beyond compare. This is helped by the media’s attempt to brand Breivik negatively while branding those Good Terrorists with positive qualities.

It is virtually universal for right-wing violence to be associated with Timothy McVeigh. Quite a bit of branding has gone into making sure that even outside the U.S., McVeigh is associated with every act of terrorism committed by a White person. A Norwegian official compared the two incidents saying the attack “is probably more Norway’s Oklahoma City than it is Norway’s World Trade Center.” Furthermore, the media has tried to equate Breivik’s Christianity with the killings, when it more than doubtful that Breivik was a “true believer” rather than someone who appreciated the cultural aspects of Christianity. In what is probably one of the more extreme attempts of not only equating McVeigh and Breivik’s actions, but equating them with Christian terrorism, Mark Juergensmeyer states in an article for the Huffington Post:

This question arose after Christian terrorist Timothy McVeigh bombed the Oklahoma City federal building in 1995. At that time and since, many Christians have refused to think of him in Christian terms. The similarities between Breivik and McVeigh are striking.

Both were good-looking young Caucasians, who imagined themselves soldiers in a cosmic war to save Christendom. Both thought their acts of mass destruction would trigger a great battle to rescue society from liberal forces of multiculturalism that allowed non-Christians and non-whites positions of acceptability. Both regretted the loss of life but thought their actions were “necessary.” For that, they were staunchly unapologetic.

The following exchange in a Time Magazine interview shows that McVeigh was motivated neither by race nor religion:

TIME: Some people have charged that you are racist? Are you a racist?

MCVEIGH: No that’s completely false. That’s again something, I don’t think right now that’s something the prosecution is going to bring up at trial because I think they are realizing that. In fact I just read a, one of our private investigators interviewed one gentleman I knew in the service who is black. He said that “No, I never saw that in Tim. In fact, that can work both ways,” meaning that another person could have not liked me and tried to turn that around….

TIME: Are you religious?

MCVEIGH: I was raised Catholic. I was confirmed Catholic (received the sacrament of confirmation). Through my military years, I sort of lost touch with the religion. I never really picked it up, however I do maintain core beliefs.

TIME: Do you believe in God?

MCVEIGH: I do believe in a God, yes. But that’s as far as I want to discuss. If I get too detailed on some things that are personal like that, it gives people an easier way alienate themselves from me and that’s all they are looking for now.

In fact, McVeigh is on record and indicated numerous times that his motivation for the Oklahoma City bombing was because of the Waco siege in which 76 people were killed by the ATF, gun control issues, and qualms about the power of the federal government. At no point does he ever indicate that Christianity or racial factors motivated his actions. That has not stopped media commentators from relentlessly comparing the Breivik and McVeigh, even making false claims. 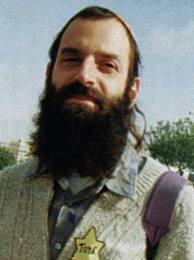 The McVeigh incident occurred in 1995. In 1994 Baruch Goldstein, a Jewish ethno-religious fanatic walked into the Cave of the Patriarchs, an area where both Jews and Muslims worship, and opened fired with an automatic rifle, killing 29 Muslims and wounding 125. This event would seem to have much more in common with Breivik than with McVeigh. Yet if one were to ask most people who Baruch Goldstein is, most would have no idea who you’re talking about. Goldstein’s rampage was partially linked to his opposition to the peace accords being pushed by then Israeli prime minister Yitzhak Rabin. A few months later, Yigal Amir, a hardline orthodox Jew, assassinated Rabin, in order to quash the Israeli-Palestinian peace process. In fact, Amir’s view that killing a Jew was justified in order to save other Jews from Muslims has just about everything in common with Breivik, who felt that killing his fellow Whites was justified to save a larger number of them.

Do not expect the media to make any such parallels, instead focusing on the non-comparable acts of McVeigh and Breivik, who both attacked their governments, but for completely unrelated reasons. (It is also worth noting that Goldstein and Amir are seen by many in Israel as heroes. It is highly unlikely that any equivalent proportion of the European population will likewise venerate Breivik). 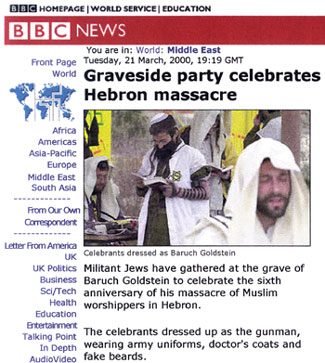 Basically, Goldstein and hardline Jews of his type, who fully believe in ethnic cleansing of the Palestinian populations, are “regrettable” instances that the media would like nothing more than to forget about. It is much more useful to invoke McVeigh, a European American, whenever a White person attacks rather than to mention a Jew like Goldstein. One may even begin to wonder if the media and the Jewish community may believe that acts like Goldstein’s and Amir’s were “atrocious” but “necessary” to end the peace process.  In an article about American right-wing Jewish rhetoric, particularly byJews from New York, Robert Friedman, writing for New York Magazine in 1995, noted that

many American Jewish leaders like [Malcolm] Hoenlein are reluctant to take on the extremists because they are themselves opposed to the peace process and it seems, would prefer to suppress criticism that might undermine the opposition. ‘Way down deep in their hearts, a good proportion of the brass hats of the Jewish Establishment are really hard-liners,’ says Rabbi Arthur Hertzberg, a former president of the World Jewish Congress.

As always, it is useful in analyzing the sincerity of the Establishment’s moral outrage over an incident by comparing it to the quiescence surrounding Israel’s many moral shortcomings. Friedman also notes that Jewish extremism in the United States was partially responsible for the Goldstein and Amir incidents, and how such extremism is not relegated to the fringes of Jewish society, but is actually quite mainstream. If we trace the hardline rhetoric of the period in which Friedman wrote, outlining the extremely nationalistic tendencies of not only hardline Jews, but also Establishment Jews, we will come to our current reality: the domination of Israeli politics by the ethno-religious right. In effect, it appears that all the money and diplomatic support provided by the U.S. to a rabidly ethnocentric Israel not only helped quash the peace process in the Middle East, but eventually led to election of a government committed to ethnic cleansing and apartheid.

While such policies are considered well and good for Israel, a similar occurrence in Europe would be viewed as a disaster within media and Jewish Establishment circles. This double-standard is presently on full display, with the media working at full capacity to bury nationalistic parties in Europe, blaming them for Breivik’s actions in an effort to undermine political parties looking to represent native European people.

In essence, the media wields its moral bludgeon with precision, striking down those perceived as enemies, and standing aside to usher past those perceived as allies. When we consider the ethnocentrism of the Jewish Establishment and the latent and sometimes very explicit hostility towards Whites and White culture, it is no wonder we live in a world where Whites are losing ground. It is evident that the high proportion of Jewish involvement in groups like SDS, explicitly anti-White groups, and even the New Left terrorist groups mirror the high proportion of Jewish involvement in the media, both in ownership and as providers of content. For Rudd and his ilk, the trend is to no longer to use bombings and violence, but to use the media and other power structures occupied by anti-White campaigners to further their anti-White agenda. After all, for most Jews and haters of Whites, such as Rudd, there is still probably too much “goyishness” in the United States and abroad.

John Schretenthaler is a freelancer writer. His website is www.cultureofpoverty.com.