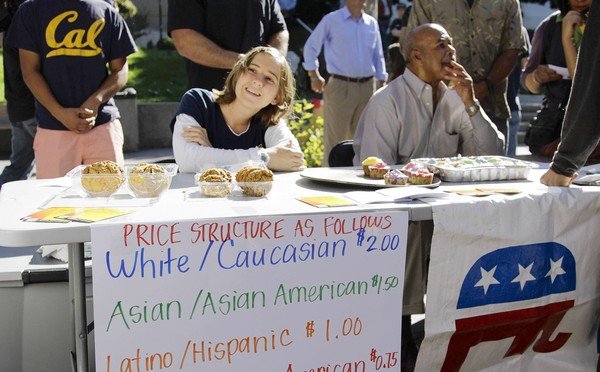 The college Republicans at UC-Berkeley have gotten a lot of attention with their bake sale in which prices are determined by people’s race and gender, with White males paying top dollar. It’s a great gimmick, definitely putting the usual suspects on the defensive.

The event, met with anger by many students, was timed to counteract a phone bank in support of a bill on Gov. Jerry Brown’s desk that would allow the UC and Cal State University systems to consider such factors, as long as no preference was given, in admissions.

Proposition 209, passed by voters in 1996, banned affirmative action in public university admissions. The current bill would not violate that ban. Instead it would permit schools to consider things such as ethnicity, much as they do extracurricular activities, when weighing candidates. “Frosted by Berkeley ‘diversity’ bake sale“; LA Times, Sept. 28, 2011)

But of course that means that being Black will be counted like being captain of the debate team: Very positive. And being White will being like having a few run-ins with your guidance counselor on your high school record—definitely a negative.

A gender and women’s studies major complained that “It’s … forcing people into a defensive position instead of an honest place of listening.” In other words, “It hurts my feelings to be put on the defensive and actually have to rationally support my position. It’s so unlike my women’s studies courses where we all think alike and we can say whatever bad things we want about Whites without being challenged.”

What’s remarkable is the “hundreds of students — many of them African American or Latino — lying down in the heart of Sproul Plaza” in protest. These people want to get all the benefits of racial preferences but never have anyone call attention to the fact that they receive the benefits. In their own minds, they are utterly deserving of these benefits—the message that is pounded home in dozens of courses that vilify White males–departments of gender and women’s studies being prime examples.