The Forward reports that American Jews still have a very negative view of Christian Zionists (“Jews Cast Wary Eye on Evangelicals“). About 4 in 5 American Jews have unfavorable opinions of the Evangelicals—about the same percentage who voted for Obama in the last election. Indeed, American Jews are far more favorable to Muslims (41.4%) than to Evangelicals.

So why do approximately 80% of American Jews liberal distrust Evangelicals?

Rabbi David Saperstein, head of the Reform movement’s Religious Action Center, said that it is not the Christian right’s beliefs on social issues that pose a problem to the Jewish community — it is their attempt to bring those beliefs to the public sphere.

“The Christian right has a clear agenda for America that it is trying to advance in all levels of American politics, and this has to do with fundamental questions of our existence, such as church and state separation,” Saperstein said. In contrast, Catholics, Mormons and Muslims, as well as Orthodox Jews, have not taken their conservative beliefs beyond their own communities.

Of course, it’s more than fundamental existential questions. Who knew that homosexual marriage and abortion rights (two of the issues mentioned in the article as dividing liberal Jews and Evangelicals) pose existential threats for Jews?  Saperstein concludes that it’s okay for liberal Jews to advocate the their liberal social agenda in the public square.  But Conservatives should be restricted to discussing these issues among themselves. I guess the idea is that the ethnic motivations of liberal Jews are just fine, but the religious motives of Christian Evangelicals are illegitimate.

From the far left to the neoconservative right, liberalism on social and cultural issues defines the Jewish community in America. And since liberal Jews are well entrenched in all of the elite positions in the media, the academic world, the political process, and personal wealth, their negative attitude about Christians evangelicals is a very important aspect of the theme of Jews as an elite hostile to the traditional people and culture of America.

One would think that at some point Christian Evangelicals would wake up and realize that the organized Jewish community and the vast majority of Jews are not their friend and are pursuing very different interests in the public square. One can sense the anxiety among the Jews who lead the organizations dedicated to promoting Christian support for Israel. David Brog, executive director of Christians United for Israel, America’s largest evangelical pro-Israel organization says that “We in the Jewish community need to stop viewing the present through the lens of the traumatic past.” I suspect that Brog is simply less candid than his liberal co-ethnics. His dedication to the cause of Israel trumps his fear and loathing of the Christian majority—at least in public.

One reason to think that is that Brog’s favorite country, Israel, is doing all it can to prevent public discussion of the fate of Palestinian Christians living in apartheid Israel. Brog knows full well what is happening to the Christian community in Israel, but would never mention that to his Christian constituents.

Recently 60 Minutes did a program (available on Mediaite)  presenting a fairly balanced account of the displacement of Palestinian Christians. For example, Palestinian Christians describe the traditionally Christian city of Bethlehem as an “open-air prison,” and they completely reject US Ambassador Michael Oren’s claim that Muslim Palestinians are responsible for the decline of Christianity.  It’s one of those little tidbits that get through the fog once in a while, this one courtesy of Bob Simon, a Jewish reporter for 60 Minutes.

It’s not surprising, then, that Oren, did all he could to derail the piece, but ultimately failed. Nevertheless, he was able to spew his fabrications in a Wall Street Journal op-ed, and he may have had some influence on the 60 Minutes piece: A source in Prime Minister Netanyahu’s office claims that “the wording was much softer than in the original version.” Nevertheless, I think most people viewing the segment would think that Oren came across as dishonest when his statements clearly contradicted the statements of the Palestinian clergy.

Paul Woodward has a nice blog on the incident, noting that Oren highlighted an example of presumably Arab vandalism against a Christian Church in 1994 to support his case that Muslims are pushing out the Christians, while ignoring the routine spitting on Christian clergy by yeshiva students and a recent example where a Christian church was defaced with Hebrew writing, as seen here: 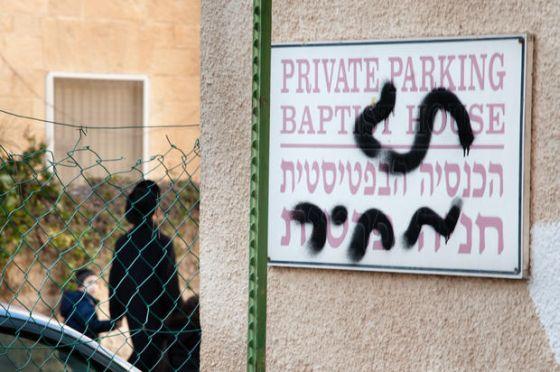 Caption from Woodward’s blog: ‘Jesus is the son of a whore,’ ‘we will crucify you,’ ‘Jesus is dead’ and ‘death to Christianity’ were among messages left behind by vandals who attacked the Baptist Narkis Street Congregation in West Jerusalem on February 20.

One certainly can’t claim that the hostility toward Christianity exhibited by Jews in Israel has anything to do with issues like abortion, women’s rights, homosexuality, and the separation of church and state. It’s far more atavistic than that. Hatred of Christianity is the mother’s milk of Judaism—the fear and loathing that Jewish writers like Elliott Abrams have discussed: The American Jewish community “clings to what is at bottom a dark vision of America, as a land permeated with anti-Semitism and always on the verge of anti-Semitic outbursts.” It’s the knee-jerk reaction of Rabbi Joshua Hammerman who was terrified that Tim Tebow’s success as a quarterback would lead to pogroms against Jews  (see here).

But that’s what it’s about these days for Michael Oren and the rest of the organized Jewish community: all lies all the time. Unfortunately, our Evangelical brethren are falling for them—hook, line, and sinker.