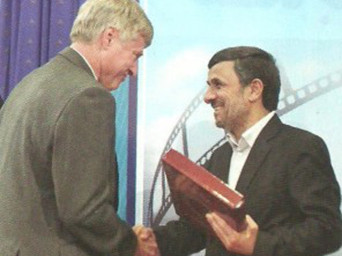 I contemplate my recent trip to the Islamic Republic of Iran and ask myself who wants war between America and Iran. I quickly surmise that it is not the American people, nor the Iranian people, but globalists (international bankers and their multinational beneficiaries). They control Israel, the American media and most of our politicians…and by extension our foreign policy.
My journey to this exotic and little understood land began with an invitation to “New Horizon – The First International Independent Filmmakers Festival”. It was a conference and festival held in Tehran from September 2nd through September 7th. Filmmakers and intellectuals from around the world attended. It was one of the most stimulating experiences that I have ever had and an effective bridge between diverse cultures and perspectives – with the purpose of promoting truth, justice, liberty, and peace.
This initiative was undertaken, not by America or other world leaders, but by a country unfairly besieged with sanctions and threats of war. My observations were in stark contrast to the perceptions of most Americans. What I experienced was a devout country with a love of God, family, and nation – and an uncompromising respect for the noblest of human endeavors.
As I write this, a giant, beautiful book, Rubaiyat of Omar Khayyam, lies next to me. Khayyam’s wonderful poems have survived the test of time and are a testament to the normally peaceful spirit of the Persian people. This treasure was given to me by President Mahmoud Ahmadinejad. Inside its back cover, he inscribed the following for me (transcribed from Farsi):

In the name of God who loves human beings.
My dear brother:
I, you, we and all of us are pursuing truth and happiness for human beings, which is unfortunately a victim of world powers.
This is a historical opportunity to undermine all inhuman relations and put an end to prejudices, which have questioned the truths and separates them, to build a new beautiful world based on love, justice and beauty.
This is a historical and certainly achievable objective. It only needs our hands, minds and hearts to join each other.
I pray Great God to bless you, who love humanity and wish success for all. I hope to meet you in a better future.
(signed)
M. Ahmadinejad
September 8, 2012