In its great days, the newsreaders for the World Service of the BBC would provide a summary of the major stories, then sign off the broadcasts in their perfect Brit accents, ‘And that’s the end of the world news.’ Subsequently, the BBC has gone multiculti in its accents, replaced the objective newsreaders with the personality style ‘anchors’ of the American media, and dropped the sign-off line. Therefore, TOO feels free to adopt it and indeed adapt it to the ‘End of the World’ News.

Tonight Sen. Marco Rubio (R. South Florida) will deliver the Republican response to Pres. Barack Hussein Obama’s State of the Union message — in both English & Spanish. This will be the first time either the State of the Union address or the response by the party not in the White House will be bilingual — and this time coming from a party, most of whose members want to make English the official language of our country. 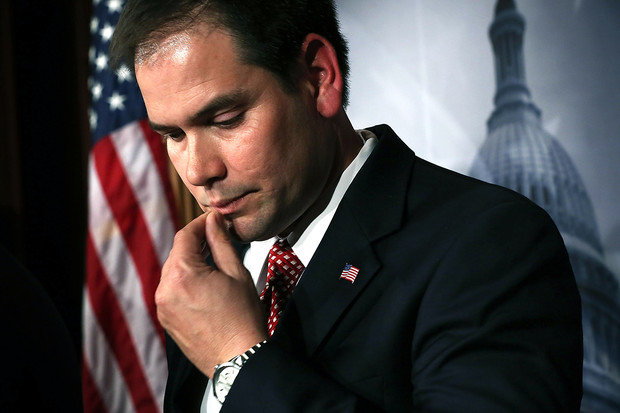 The son of Cuban immigrants, Rubio is of fairer complexion than Louisiana Governor Bobby Jindal who gave the response to Obama’s 2009 speech. (Of East Indian descent, Jindal’s speech came off as a failed audition for higher office.) Elected with the support of the conservative Tea Party faction, since taking office Rubio has, as they say, “grown.” Translation – he now supports more “moderate” policies and is a key player in the bipartisan “Gang of Eight” Senators who are preparing yet another watering down of U.S. immigration laws.

Already featured on the cover of February 18th TIME Magazine as “The Republican Savior,” Rubio will offer an immigration “compromise.” Translation: legal — the more the merrier; illegal — it’ll take you a while.

However, Rubio’s response to Obama will focus on the economy — the usual GOP pro-corporate, pro-super-rich platitudes, somehow disguised as a way to save “the middle class.” Immigration, will be secondary, and only presented as a way to rescue the economy through growth.

And if you believe that immigration will rescue the economy, there’s a whole lot of swamp land in Rubio’s home state I’d like to sell you.

So if you’re looking for an implicitly White political party, you can pretty much say, ‘Adios amigos!’ to the GOP.

Meanwhile, Senator Rand Paul will deliver the Tea Party reply to Obama’s address and the Republican response to it. The only important question is whether he will sit in front of:

a. Just the American flag?

b. The flags of the U.S. and his home state of Tennessee?

c. Or, as has been his custom lately, centering himself between the flags of the U.S. and Israel, in the hope of making amends for his father having been so often “off the reservation” on U.S.-Middle East policy? 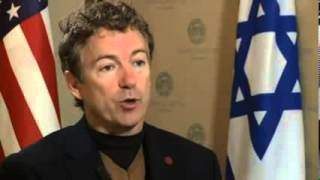 While in 2010 Democrat VP Joe Biden (another pol given to erratically “off the cuff remarks”), dared to criticize Israel’s unrestrained building of settlements, when the Paul the Younger visited Zion in January of 2013, things were, in the words of the ultra-Zionist Seth Lipsky, writing in the New York Post, “nothing but sweetness and light on the settlements — not even quarreling much over foreign aid” (which Paul the Elder railed against as unconstitutional).

You see, unlike his Ron Paul’s frequent gadfly candidacies, Rand Paul now has serious aspirations to be the next GOP presidential candidate, thus making him Rubio’s prime contender (or pretender at this stage in the process) to the title. Paul, a Libertarian, needs to broaden his support and shed his old man’s crankiness, especially towards a certain powerful lobby. You see, “If Liberty is your cause, after all, then Israel is your best bet there is in the Middle East.” At least that’s how Lipsky sees it— as opposed to just about every nation and newspaper outside Israel and the U.S.

The announcement by the Roman Catholic Church that Pope Benedict XVI (aka Cardinal Joseph Aloisius Ratzinger) will resign at the end of this month and so hand over the Keys of the Kingdom and take off the Shoes of the Fisherman has opened the possibility of the First Third World Pope opening the doors of St. Peter’s Basilica.

Just like the GOP, the RC is feeling the PC criticism for lack of diversity. And if the Church wants to stick to its teachings on moral issues, such condemning homosexuality and other paraphilial perversions or even female priests, it has to “immunize” itself against any charges of “racism” or “ethnism.”

Unlike the GOP, however, the Church Catholic and Universal has a substantial and growing membership among the darker pigmented populations of the world. Indeed, that’s exactly where it is growing. Europeans have become so enthralled with material possessions and secularized that they have largely fallen away from the Mother Church. The strength of Catholicism in exceptions such as Ireland and Poland is likely more for ethnic and nationalist reasons than anything having to do with religion. Catholicism in those countries has long served as a proxy and rallying point for Irish and Polish identity against foreign domination.

Given those demographics, the College of Cardinals could find it not only God’s will, but politically correct and demographically astute to select the next Pope from Ghana, Nigeria, Brazil, or somewhere else in South America. Don’t bet on Cardinal Dolan on New York City. And forget about Cardinal Roger Mahoney of Los Angeles. 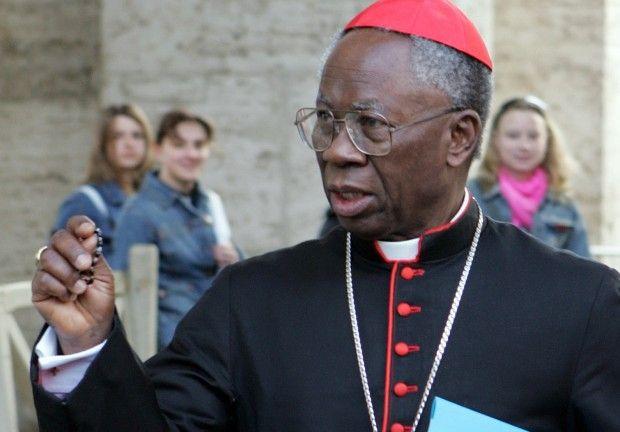 If the Conclave chooses either fellow Cardinal Arinze or Turkson, would it not be insensitive to use the traditional “white smoke” to signify their successful vote, as opposed to the “black smoke” used to signify failure?