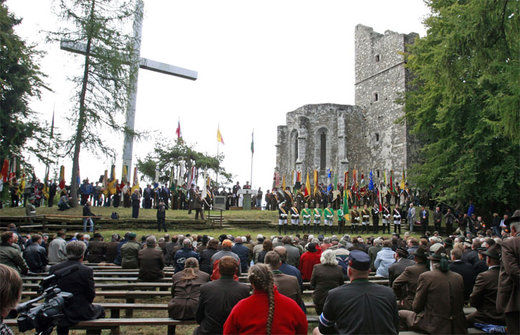 What follows is my translation into English of my featured speech, delivered in the German language on September 15, 2013, at Ulrichsberg, a village near the town of Klagenfurt, Carinthia, Austria, during the annual Memorial Day for the victims of communism and the victims of the Allied persecution in the aftermath of WWII.  The event was organized by the Austrian veterans’ organization Ulrichsberggemeinschaft. (Carinthia  was the last line of the  Axis defense by mid-1945,  before the surrender to British troops and mass deportation of civilians and soldiers to the Soviet Union and Yugoslavia. The famous term, the “Iron Curtain” became then the hall mark of Carinthia).

Approximately 300–400 hundred people, mostly elderly, attended this open air event, mostly post-WWII German expellees from Eastern Europe, dozens of former Waffen SS and Wehrmacht veterans, including the descendants of other European Waffen SS units and other foreign auxiliary Axis troops from France, Italy, Hungary, Byelorussia, Croatia, Romania, Flanders, Wallonia, and Alsace. There were also a dozen representatives from Great Britain, Australia and the USA. The Ulrichsberg memorial day has a strictly commemorative purpose; any unconstitutional insignia any glorification of Nazism or Fascism is considered a serious breach of law and severely punished under the Austrian legislation. The annual event is partly sponsored by the local government of Carinthia.  In 2000, the featured speaker at the Ulrichsberg event was the late leader of the Austria’s FPÖ, Jörg Haider. 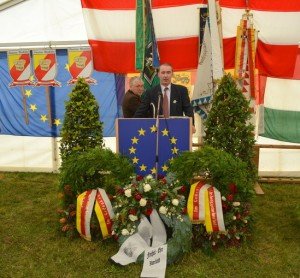 It is an honor for me to be allowed to hold this short speech here. But this speech of mine here is also my civil duty to countless people from all over Europe who encountered their tragic fatal hours here. This beautiful place, as well as the entire land of Carinthia, exemplifies extreme natural beauty. But this land is also a symbol of extreme suffering of countless soldiers and civilians from the two world wars, and especially from the period following World War II. In its beauty I always detect something frightening. In general, extreme beauty can transform itself instantaneously into unspeakable horror. For the troops of the Roman general Varus in AD 9, the Westphalian forests were not really a romantic place. For Arminius, on the contrary, it was very pleasant. As a young man — and even today — I was terrified when watching many German and Austrian tourists swimming at the beach resorts of the nearby Istria, in Croatia. How could one savor the Croatian seaside bays in view of the fact that countless German soldiers, countless Italian and Croatian citizens were murdered there in the summer of 1945. Carinthia and Croatia are not only the lands of beauty, but also the lands of death.

We commemorate here not only the dead from Austria or Germany, but also the dead and the fallen from other countries who were passing through these lands in the summer of 1945 in order to save their lives.

Ladies and gentlemen, dear friends. Each memorial day is a highly problematic event. What may be viewed as honorable and humane by victims can be catalogued as criminal by perpetrators — and vice versa. Empirical or forensic evidence regarding historical facts do not help at all. A belief, a political theology of a dissenting opinion cannot be fought with arguments. If that were the case, it would no longer be a belief, but a commonly accepted fact.

Just like many of you I am also an expatriate coming home, albeit within a different historical framework. After my days of exile in the US, after the breakup of Yugoslavia, I returned to free Croatia. But my fight and our fight continue because many Croats have different assessments of their recent history than in communist Yugoslavia. And often this does not please the opinion makers, including the so called anti-fascists in Austria and in the EU.

On the one hand we are all enjoying here the natural beauty, but on the other, we must also ask ourselves the question: what was the perception of this natural beauty by the many soldiers and civilians from Central, Eastern and Southern Europe fleeing further to the north in late May 1945, or simply attempting to flee to liberty?  We must also not forget countless and nameless citizens of Central and Southeastern Europe who were fleeing over these mountains long after the Second World War was over, and who longed for freedom. Here we are savoring the beautiful topography, but this topography had once the name of the topography of death. Therefore, no memorial day of an ethnic group, or a people, can be an apolitical event or remain unaffiliated to a political party. As much as I am trying to remain nonpartisan, objective, academic and factual with my speech regarding these victims, in the eyes of my opponents the victims here and their suffering was only a deserved punishment for their real or alleged previous misdeeds.

Further problematic is the fact that in today’s “struggle for historical memory” not all victims have the same right to commemoration. We can observe this every day in the media. Some victimhoods must have precedence over the others and some need to be forgotten altogether.

Ulrichsberg is a symbol of countless German and countless European, Croatian, Hungarian, Italian, Belgian and French memorials. What connects us to Ulrichsberg, connects us also to Bleiburg in Carinthia, or to Dresden in Saxony. In the Croatian historical memory the word “Bleiburg” has a very special resonance, similar to what Ulrichsberg has for you. The very instant one pronounces in Croatia the word ‘Bleiburg’, one does not think of beautiful woods or skiing resorts, or a shopping center in Carinthia. In the Croatian vocabulary the word ‘Bleiburg’ has become almost a metaphysical term for the overall Croatian being.  Bleiburg is not a symbol of a beautiful romantic place, but a symbol of Croatia’s biological disaster. In May 1945 at Bleiburg, hundreds of thousands of fleeing Croats, many Cossacks, many Montenegrins, many Serbs and Slovenes, mostly civilians, were given over by the Anglo- American allied troops to the Yugoslav communist thugs.

We must also not forget the millions of displaced Germans from Silesia, Pomerania, from the Sudetenland and the Danube area, including the land of Carinthia. Unfortunately, there are still double standards in commemorating the dead of our post-war times.

As a great German constitutional lawyer Carl Schmitt taught us, there is a dangerous problem with modern international law, and hence  with the ideology of human rights,  and consequently with our remembrance days of today and tomorrow. For many media people, for many so-called anti-fascists, the people who fled through Carinthia in the summer 1945 were monsters and vermin. How then can human rights apply to vermin and to un-democrats?  For the so-called monsters there cannot be a memorial place. They merit no compassion and no tears. According to these anti-fascists they deserved death.

We are accused sometimes of playing up our Memorial Day in order to allegedly trivialize Nazi crimes. This is nonsense. This thesis can be easily reversed. The court historians and opinion makers forget that any unilateral victimhood is conflictual in its nature: each unilateral victimology insists only on its own uniqueness at the expense of the other victimhood. Today’s victimological atmosphere in multicultural Europe prompts every tribe, every community, and every non-European immigrant to conceive of his victimhood as the only important and a unique one. Each victimhood stands, however, in competition with the other victimhood, which ultimately leads to collision. Such a one-sided victimhood mentality does not serve to prevent conflict or to foster peace. It leads to multi-ethnic violence and makes future conflict inevitable.

Mutual victimhoods — regardless of how much one can criminalize or trivialize them — cannot lay hidden or hushed up for long. To put it differently, apart from our alleged exploitation of our alleged victims here, why do we hear so little, almost nothing, in schools or in the universities about the sufferings of the Germans, Croats and other nations, shortly after World War II?

Through today’s trivialization and downplaying of Allied war crimes, a climate of mutual understanding and reconciliation cannot occur. Rather, a climate of false mythologies and conflicting victimhoods is being born, whereby each person, each family, each ethnicity feels compelled to consider himself a victim of its respective neighbor.

The classic example is the collapse of the former artificial prison-state of Yugoslavia, where the mendacious communist victimhoods were the main reason for the war in 1991. The Communist Yugoslav court historians had not laid the groundwork for mutual understanding among the Yugoslav peoples, but instead brought about mutual hatred and war.

Dear ladies and gentlemen, dear colleagues and dear comrades — let us not succumb to illusions. Ulrichsberg is not only a deserved memorial place against all wars, a place of reconciliation, and a place of remembrance. Ulrichsberg can become a symbolic road sign to imminent catastrophes. We can all imagine what awaits us in the following years. Some of you, some of us with a longer historical memory, know well that a world has come to an end. The forthcoming world will be ugly. But the forthcoming world offers us all a chance.

Thank you for your attention. 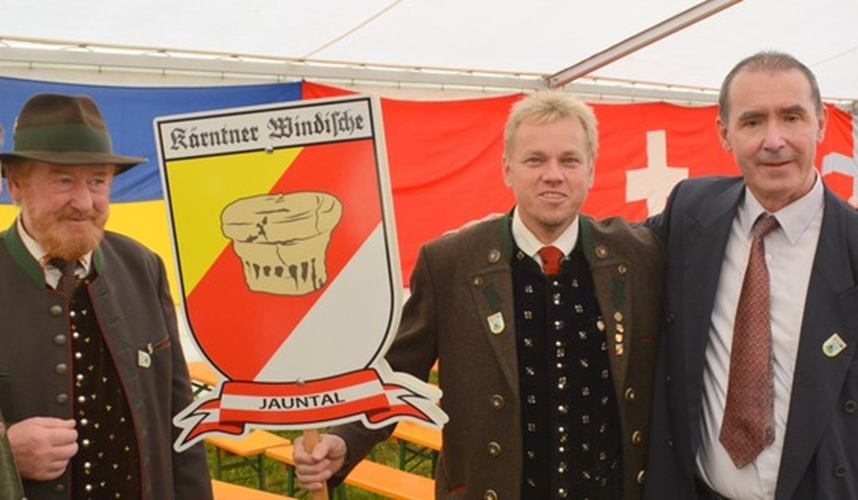 Dr. Tom Sunic is former professor of political science and a Board member of the American Freedom Party.  He is the author of Homo americanus: Child of the Postmodern Age (2007).