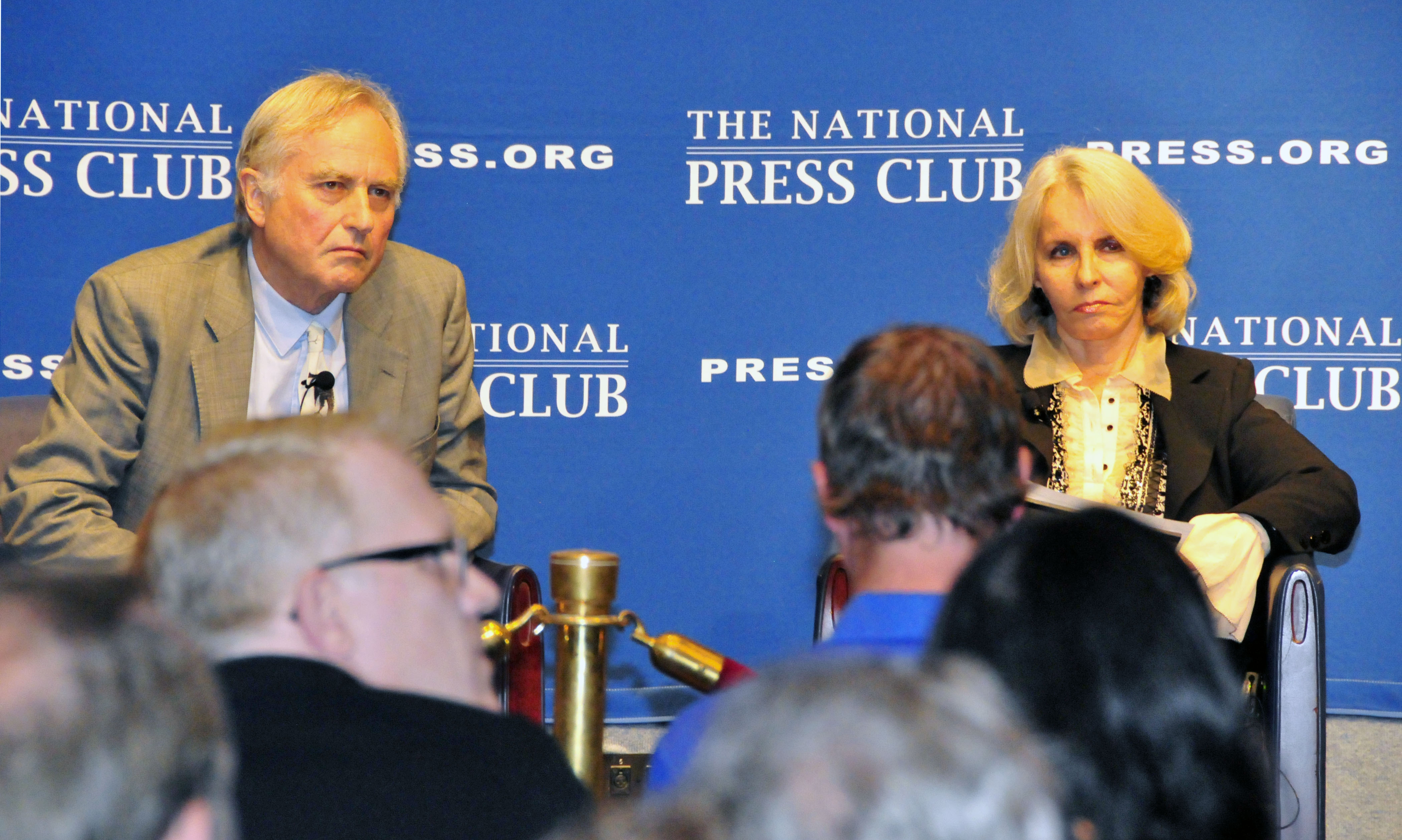 Richard Dawkins has been making the rounds on the celebrity-author circuit with the release of his newly published memoir, An Appetite for Wonder, the first of a projected two-volume autobiography.

Dawkins addressed a standing-room only audience at the National Press Club in Washington, D.C., on September 30. The event’s host was Sally Quinn, who was once described as “the reigning queen of Washington dinner party culture.” Quinn has carved out a niche as the supreme hostess of the Georgetown salon, the keeper of the keys to the beltway’s celebrity circuit.

The 72-year-old socialite has attained celebrity status for who she is, not what she has accomplished. Quinn is the third wife of former Washington Post editor Ben Bradlee, who rocketed to fame during the Watergate scandal. Were it not for Nixon’s ill-fated cover-up, Bradlee and Quinn would have remained relatively obscure beltway figures as editor and spouse.

Her resume is quite thin. Quinn’s accomplishments include: graduating Smith College, getting hired at the Washington Post without any writing experience (Here is her reported job interview with Bradlee: “Can you show me something you’ve written?” asked Managing Editor Benjamin Bradlee. “I’ve never written anything,” admitted Quinn. Pause. “Well,” said Bradlee, “nobody’s perfect.”), failing to make it as a television news anchor on the CBS Morning News (leaving the program in six months), writing two books and various profiles for The Washington Post, and at 41 giving birth to a son.

One wonders why of all people a superficial gadfly and gossip maven with no known scientific background or any sustained interest in anything beyond celebrity culture was selected to lead a “discussion” of science and other related topics with a leading scientific writer. After all, An Appetite for Wonder ends during Dawkins’s period of writing The Selfish Gene, covers his formative years as a graduate student and early academic tenure, and contains very little about religion or for that matter his views on atheism, creationism, and Christianity.

True enough, Quinn has written about Dawkins’s work. In a Washington Post interview about Dawkins’s Magic of Reality, a book geared to young readers, Quinn refers to Dawkins as “Dawson” near the end of the interview. Nobody’s Perfect!

The evening had its moments, but for the most part never strayed beyond a few superficial notes and “politically correct” mundane subjects. One avid reader, who has a rigorous “appetite for wonder,” was making his way to the line at the microphone to ask Dawkins about more pressing matters when a National Press Club staffer announced, “we’ll take one more question,” which promptly excluded nearly a dozen attendees who waited patiently in the Q&A line.

Most of the questions were related to religious matters. One young reproductively fit female thanked Dawkins for changing her life. She was on-track to become a nun and his writings as a religious skeptic helped derail her initial plans. A former Muslim said that he also had seen the light after reading Dawkins and credited him for instilling a skeptical outlook as someone who prayed to Mohammad five times a day.

One awkward moment occurred when Dawkins was talking about the influence of organized religion. He said that even though the non-religious segment of the American population is an estimated 20 percent of those surveyed in a 2012 Pew Forum poll, this group remains underrepresented in Congress (only one member, now retired, has proclaimed to be an avowed atheist). Dawkins then noted that Jews, who by comparison are smaller in numbers, are “powerful” as an organized lobby. Without missing a beat he then qualified his remark saying, “rightfully so.” Quinn was looking down and scribbling on a notepad.

No one, neither Dawkins, nor Quinn, nor any attendee during the Q&A segment, strayed beyond “safe” topics to inquire about the Oxford-trained scientist’s views on curiously neglected taboo subjects. (Perhaps a better title for  his book would be An Appetite for Wondering about Safe Topics ) As an avid scientist who was heavily influenced by Darwin, Dawkins has said very little about eugenics, the science of improving the human condition by genetic selection or gene therapy, which was founded by Darwin’s cousin Sir Francis Galton. Richard Lynn’s Eugenics: A Reassessment is an exhaustive debunking of the repeated canard that eugenics is a “bogus” science. Eminent scientists, notably Sir Ronald Fisher, Sir Julian Huxley, Dwight Ingle, J.B.S. Haldane, C. P. Blacker, and Nobel Prize winners Sir Peter Medawar, Hermann J. Muller, and William Shockley have embraced and promoted the idea, and some have written at length on the subject. Dawkins has noted in The Greatest Show on Earth: The Evidence for Evolution that

Political opposition to eugenic breeding of humans sometimes spills over into the almost certainly false assertion that it is impossible. Not only is it immoral, you may hear it said, it wouldn’t work. Unfortunately, to say that something is morally wrong, or politically undesirable, is not to say that it wouldn’t work. I have not doubt that, if you set your mind to it and had enough time and enough political power, you could breed a race of superior body-builders, or high-jumpers, or shot-putters; pearl fishers, sumo wrestlers, or sprinters; or (I suspect, although now with less confidence because there are no animal precedents) superior musicians, poets, mathematicians or wine-tasters.

Some worthy questions to pose to Dawkins: Why is there such a disconnect between the public’s general understanding of the scientific principles of eugenics and the wider acceptance and embrace by the scientific community? If Israeli scientists are busy applying eugenic principles in the elimination of defective genes for a range of inherited diseases in the Jewish gene pool, why shouldn’t this practice be extended to other population gene pools for selective inherited traits, such as intelligence, personality and other biological deficiencies? Why should the specter of mad scientists and despots surface when eugenics is discussed, except when Jews stand to gain from the application of eugenic practices?

Likewise, as Frank Salter has pointed out, Dawkins has remained silent on the importance of ethnic kinship which is critical for thinking about the tsunami of immigration inundating  Western (and only Western) societies.  He has also avoided discussing the genetic basis of race differences, and has staunchly opposed group selection, even among humans, despite the ability of humans to get around the usual problems of group selection among animals (e.g., monitoring and punishing free riders). Given that ancestral groups, or races differ in terms of their genetic lineage, what are the wider ramifications for policies that seek to achieve human equality but ignore important biological realities of race?

Another related question to pose to Dawkins would have been to ask: Is it really fair to ostracize Nobel Prize-Winning scientist James Watson for stating the following reality, “[I am] inherently gloomy about the prospect of Africa [because] all our social policies are based on the fact that their intelligence is the same as ours—whereas all the testing says not really.” Should prominent scientists, such as Watson, suffer the loss of status, income, or life-long career achievements for candidly speaking their minds and stating blunt truths about inequalities across populations?

Dawkins had his well-publicized differences with Stephen Jay Gould, but has avoided specifically addressing the undercurrents of the dispute. What does he think of the revelations in the wake of Gould’s death that Gould misled his readers to reach a preconceived (biased) position that favored his egalitarian beliefs? As Wired magazine reported (see also here),

Gould used the well-documented work of a long-dead man to make an argument that unconscious bias is widespread in science,” wrote University of Wisconsin anthropologist John Hawks, who was not involved in the new study, on his blog. “Gould owed us a responsible reading and trustworthy reporting on that evidence. In its place, he made up fictional stories, never directly examined the evidence himself, and misreported Morton’s numbers.

Furthermore, why aren’t Marxist scientists, such as Gould, held accountable to the same standard for deception and fraud in their work as applied to hereditarians or other scientists on opposing sides of scientific disputes? The mere accusation of fraud cost Cyril Burt his entire career even though the initial accusations have been strongly rebutted and his findings are in line with many other studies (e.g. here and here, and here, p. 364). Yet a clearer case of deception in Gould’s work seems to be a relatively minor indiscretion by comparison.

During the introduction, Quinn that Dawkins has a contract for another book and, what do you know, she has one too! Perhaps her forthcoming blockbuster is titled, How to Destroy One’s Natural Facial Qualities and End Up Looking Like Cher and Joan Rivers Without Really Trying! One can only wonder who in their right mind would have an appetite for anything Quinn would have to say about, well, anything. Her presence as host of this National Press Club event qualifies Quinn as the consummate leech, piggybacking on her host for self-promotion.  Actually sharing the stage with Dawkins gives him an opportunity to examine one more reptilian fossil.

We may never know what Dawkins thinks about these and other neglected scientific matters. As long as his career, fame, and fortune depends on swimming in the same cultural sewer that produces the likes of Sally Quinn, Dawkins will remain forever silent on issues that more eminent scientists have addressed, sometimes at great sacrifice to their professional status. For Dawkins and Quinn, status seems to be everything.