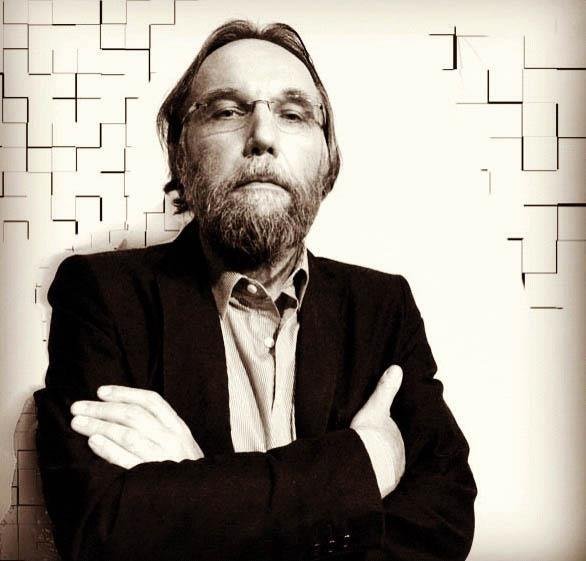 Dugin’s contempt for the current oligarchic system of exploiting Russia’s mineral resources to the benefit of Western businesses is evident in his recent comments on the Mikhail Khodorkovsky case. Dugin:

Khodorkovsky stands for organized crime in Russia. It is unimaginable that a man like Khodorkovsky, even in a Western country, would not be jailed. He is just as criminal as all the other oligarchs who became overnight millionaires…Khodorkovsky increasingly took pro-Western positions like calling for a sharp drop in support of the Russian Army. He supported Western liberal forces in Russia. For Khodorkovsky the disarmament of Russia was an important way to open the country to Western liberal development. Russian independence and sovereignty would be bartered for greater ties with the West. As the richest man in Russia, Khodorkovsky announced that he could not only buy the parliament but the voting results as well. Khodorkovsky went even further. He blackmailed Putin by threatening to sell “Yukos,” Russia’s largest oil company, to the Americans. In effect, Khodorkovsky declared war on Putin. Putin reacted by bringing the oligarch to court where he was convicted for his crimes, not for his political views. The West has made a hero out of Khodorkovsky because he wanted to make Russia a part of the West. (Zuerst interview, May 2012)

It was only after Dugin became acquainted with Yevgeny Primakov and Vladimir Putin that his ideas gained greater popularity. Dugin holds Putin in the highest esteem. According to Dugin, Putin personally is a liberal, thoroughly pro-Western politician who believes equally deeply that Russia must protect her sovereignty and independence. Fruitful negotiations with the West are only possible when Russia’s sovereignty, and the State’s determination to defend it, is understood and respected. If to this point Dugin’s movement has been a strictly internal Russian affair, it has recently sprouted international wings with plans for a Russo-Islamic Pact, including Iran and Iraq, and a Turkic-Slavic alliance in the Eurasian sphere.

Both the Arabs and the Turks still smart at the treatment they received at the hands of the French and British after World War I and the dissolution of the Ottoman Empire. As a result, they may be more amenable to better relations with Moscow. Moreover, the Eurasianists recognized that Islamists are already at war with the United States all over North Africa, the Near East, and down the East African coast. Some Eurasianists have proposed uniting the entire Orthodox Christian world and encouraging them to join with radical Islam in confronting American materialism with Old World spiritual values and traditions.

But, of course, Europe, especially France and Germany, remains the crucial focus of Dugin’s Eurasian plans for a Paris-Berlin-Moscow political axis. After victory in World War II the Allies had blindly granted Stalin most of East Europe and all of Prussia as well as the Kurile Islands as well as contiguous borders with Red China after Japan surrendered. The Soviets now use these territories as bait to lure Japan and Germany back under their control or to humiliate the former axis powers as U.S. satraps.

For example, ten years ago in his Principles of Geopolitics Dugin wrote:

It would be wise to return the Kaliningrad region (Koenigsberg, East Prussia) to Germany so as to eliminate the last territorial symbol of a horrible fratricidal war. In order that this action is not seen as just another Russian geopolitical capitulation, it would make sense for Europe to agree to make other territorial changes and other ways of expanding Russia’s strategic zone of influence… (see Robert Logan. “Terrorism, Eurasianism & Russo-American Cooperation,” The Barnes Review, No. 6, 2004.

Germany is an occupied country run by a foreign power. The Americans exercise real control. Germany’s own political elite is not free. As a result of this situation Berlin cannot act for the good of the country, as it should. In fact, at the present time Germany is being governed against her own best interests. We Russians can help the Germans because we understand Berlin’s predicament better and could improve it. For example, we are building Russo-German networks at many different levels. We can work together with different groups in the Federal Republic and deepen our cultural relations. I firmly believe that one day there will be a free, strong, and independent Germany in Europe to play the role of an important intermediary between the East and the West. Germany’s fate will not be that of a vassal of Brussels and Washington. (Dugin Interview. Zuerst. Germany, No. 10, 2012, p. 12)

To counter perceived U.S. provocative interference in Russia’s internal affairs, Dugin’s closest advisor and colleague in the Sociology Department at Moscow State University, Leonid Savin, the chief editor of the journal Geopolitika, has been made responsible for monitoring the activities of all foreign NGO (Nongovernmental Organizations). Dugin describes various U.S. sponsored activities that interfere with and attempt to distort Russian life. The sole purpose of these groups, which are funded by the U.S. and European governments, is to destabilize the Russian State and incorporate it in the Western system. Dugin:

The U.S. millionaire, George Soros, for example, whose foundations provide massive support to pro-Western groups in Russia, plays an important role in such activities. In addition, other U.S. organizations like, for example, “Freedom House,” that gets 80% of its financial support from the U.S. government, distributes U.S. politician Gene Sharp’s booklet The Politics of Nonviolent Action which explicitly influenced the revolutionaries in Ukraine.

The recent outrageous “Pussy Riot” publicity stunt was immediately presumed by the Russians to have been supported by U.S. NGOs. In this unfortunate event, too many Americans including several celebrities, mistaking the smutty antics and political acts of this particular group as demonstrations for human rights, applauded the performance.

Dugin and his Eurasianists are fully aware that many Europeans also disapprove of American dominance, the homogenization of cultures, and the loss of ancient traditions as fervently as do the Russians. As early as 1959 Charles de Gaulle declared: Oui, c’est l’Europe, depuis l’Atlantique jusqu’à l’Oural, c’est toute l’Europe, qui décidera du destin du monde. (Yes, it is Europe, from the Atlantic to the Urals, it is Europe, it is the whole of Europe that will decide the fate of the world.) And as recently as 2002 Henri de Grossouvre wrote Paris-Berlin-Moscow: The Way of Peace and Independence, about which General Pier Marrie Gallois, France’s foremost geostrategic thinker said: “Europe would never regain its sovereignty until it throws off American suzerainty and does so in alliance with Russia.” (Michael O’Meara, Ref. 2)

During the past several decades aggressive U.S. diplomatic and military escapades in East Europe and the Muslim world have caused sentiment in Europe to turn sharply against American globalization adventures. For example, Alain de Benoist, founder of the “New Right”, a movement also referred to as “Identitarianism,” declared:

What poses the biggest threat to collective identities today is the system “that kills the peoples,” that is to say, the imposition of an across the board system of global homogenization that eliminates all human diversity, diversity of the peoples, of languages and cultures. … The greatest danger is the rise of indistinction, the erasure of differences, the destruction of popular cultures and lifestyles in a globalized world in which the only recognized values are those expressed by the price tags, that is to say by big money … Like many Europeans, I am amazed that American conservatives defend almost unanimously the capitalist system whose expansion methodically keeps destroying everything they want to conserve. (Alain de Benoist.. “On Identity”. Speech given at the meetings of the National Policy Institute, Washington, DC, on November 2, 2013)

Thirty years earlier during the Cold War de Benoist made the same point but in a way that made every Frenchman’s ears perk up, “Better to wear the helmet of a Red Army soldier, than to live on a diet of Hamburgers in Brooklyn.”

While Alexander Dugin would very much appreciate being publicly associated and joining forces with Europeans like those involved with the New Right, the feeling is not reciprocated. The French and most other Europeans simply do not trust the Russians. Barring any unforeseen catastrophe, such as the social disintegration or financial collapse of the United States, the possibility of any grand European alliance with Russia is nil. Consequently, Dugin’s philosophizing and theorizing, a Russian specialty, will continue.

In his The Fourth Political Theory, Dugin proposes that the best features of the three failed ideologies of the 20th Century – liberalism, communism, and fascism – be selected and joined together to form the political ideology of the 21st Century. However, before the features of the failed ideologies found useful for the new Party are selected, other features, considered toxic, must be thoroughly expurgated. Thus, all traces of racism are deleted from Fascism (Nazism); anti-spirituality ad economic determinism from Marxism (Communism); and individualism from Liberalism. What remains may be useful for the fourth political theory.

The “Eurasian Idea” is presented as an alternative to U.S. global hegemony and places a so-called “Multipolar World” in opposition to Western liberal universality. Dugin insists that in the Multipolar World all peoples would have the right to form their own future with the roots of their own history intact. This would occur within the framework of alliances among the different peoples of the Continent. One such alliance is Eurasia. The Eurasian idea is a geopolitical concept developed by Russian intellectuals like Nikolai Trubetzkoy, Piotr Savitzky, and Lev Gumilov early in the last Century (Dugin Interview. Zuerst Germany. Nos. 8-9, 2013, p. 52-53).