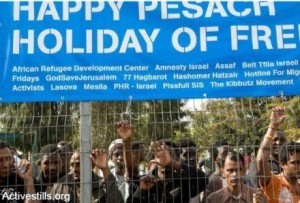 As noted ad nauseum at TOO, while Diaspora Jews in the West continue to promote immigration and multiculturalism as intrinsic goods and unquestioned moral ideals, in Israel the whole point of public policy is to retain its Jewish character. The most recent example is shipping to Sweden dozens of African refugees living in Israel. Patrick Cleburne’s account at VDARE says it all:

Given that immigration and multiculturalism are presented as moral imperatives in the West, this results in a double moral standard—one morality for the ingroup and a quite different morality toward the outgroup; the theme of Jewish moral particularism. Unlike the addiction of the West to moral universalism, Jewish groups behave as a foreign policy realist (or evolutionary psychologist) expects states to behave. They simply pursue their interests with the aim of surviving and prospering.

And that means pursuing radically different strategies depending on whether Jews are a demographic majority or a tiny minority. In the West, the organized Jewish community avidly pursues displacement-level immigration and multiculturalism as tools to render the traditional majorities relatively powerless and incapable of mounting attacks on Jews. In Israel, the goal is to retain Jewish identity and minimize the presence and the influence of non-Jews—goals that are enthusiastically supported by Diaspora Jews and Jewish organizations.

Although Jewish groups in the West cannot be analyzed as corporate structures in the way a state like Israel can, in fact, Jewish organizations and the great majority of individual Jews in the Diaspora in the West support displacement-level immigration and multiculturalism as appropriate for Western countries.

Thus it is not surprising that an ingroup/outgroup ethics also appears in the behavior of individual Jews. It is particularly noticeable among the more Orthodox elements. A good recent example are the reactions to the death of Menachem Stark, a Hasidic “slumlord” whose burned body was found in a dumpster. The New York Post headline screamed “Who didn’t want him dead?,” an allusion to Stark’s many enemies resulting from his sleazy business practices. 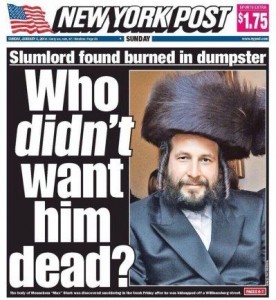 But, as reported by JTA, reaction was quite different in the haredi media:

But while mainstream media outlets scrutinized the Satmar hasid’s relationships with tenants, contractors and lenders, haredi Orthodox publications offered a decidedly different take — looking not for clues to why someone would kill Stark, but celebrating his many virtues.

Yated Ne’eman, a prominent haredi weekly, praised Stark as a “loving father and baal chesed,” or charitable giver. Hamodia, a leading haredi daily, called Stark a “greatly beloved member of the Williamsburg community,” citing anecdotes that showed his generosity within his Hasidic neighborhood. Another Hamodia article condemned the Post for publishing “a litany of untruths to malign the integrity of Mr. Stark,” though it made no mention of the nature of the tabloid’s allegations.

The publisher of a Haredi newspaper comments that

A crucial part of our mission is protecting our readers’ right ‘not to know,’” Lichtenstein wrote. “Far more difficult a task than providing you with newsworthy and ethical reading material is ensuring that you, our loyal reader, aren’t exposed to material you would find unfit to enter your home, your mind, and your heart.”

Apparently Mr. Stark did not have enemies within the Hasidic community. He was a pillar of the community, and very generous in donating to community charity. But outside the community is another matter.
It’s not that the Hasidic community will never condemn one of their own. If, for example, he had committed the sin of mesira by informing on child molesters, money launderers, tax evaders, or other criminals within the community, his life within that community would be essentially over. He and his family would be shunned. The practice of mesira is all about protecting criminality within the Jewish community. Menachem Stark is just another example.
And of course, the ADL stood up for Stark, concerned that Stark’s behavior reinforces a very old Jewish stereotype. “In a letter to the New York Post, the Anti-Defamation League called the Post’s headline “insensitive” and also took issue with the accompanying article for referring to Stark as a “millionaire Hasidic slumlord” in its lead sentence.”
In the ADL’s ideal world, the story would be presented without any mention of him being a Jew and certainly without a photo clearly marking him as a Hasid. In other words, the Post should have followed the usual policy of the NYTimes et al. where all those articles on Black on White violence identify the perpetrators solely as “young males” and with no accompanying photos.
https://www.theoccidentalobserver.net/wp-content/uploads/2018/06/TOO-Full-Logo-660x156-1.png 0 0 Kevin MacDonald https://www.theoccidentalobserver.net/wp-content/uploads/2018/06/TOO-Full-Logo-660x156-1.png Kevin MacDonald2014-01-12 14:27:542015-09-02 09:24:51Two Ingroup Morality Items
4 replies