Third Editor’s note: The Open Ukraine website does have the list of partners. Again, the main point is that, despite a prominent role for nationalists in the revolution and in the current government, this list is a clear indication of the anti-nationalist sentiments of a key figure in Ukraine’s current government.

Second Editor’s Note, 3/12: The website for Open Ukraine (http://openukraine.org/ua) has reappeared,  but without the list of partners that so clearly show its sympathies with the neocons and Western NGOs and financial institutions.

Editor’s Note: This article by Freeman shows that, despite the presence in the new Ukraine government of the Svoboda nationalists, its president, Arseniy Yatsenyuk (who has three ethnically Jewish grandparents)  is firmly affiliated with neocons, Western economic interests, and prominent figures associated with hostility toward Russia.

By Freeman, transl. from German by Michael Colhaze 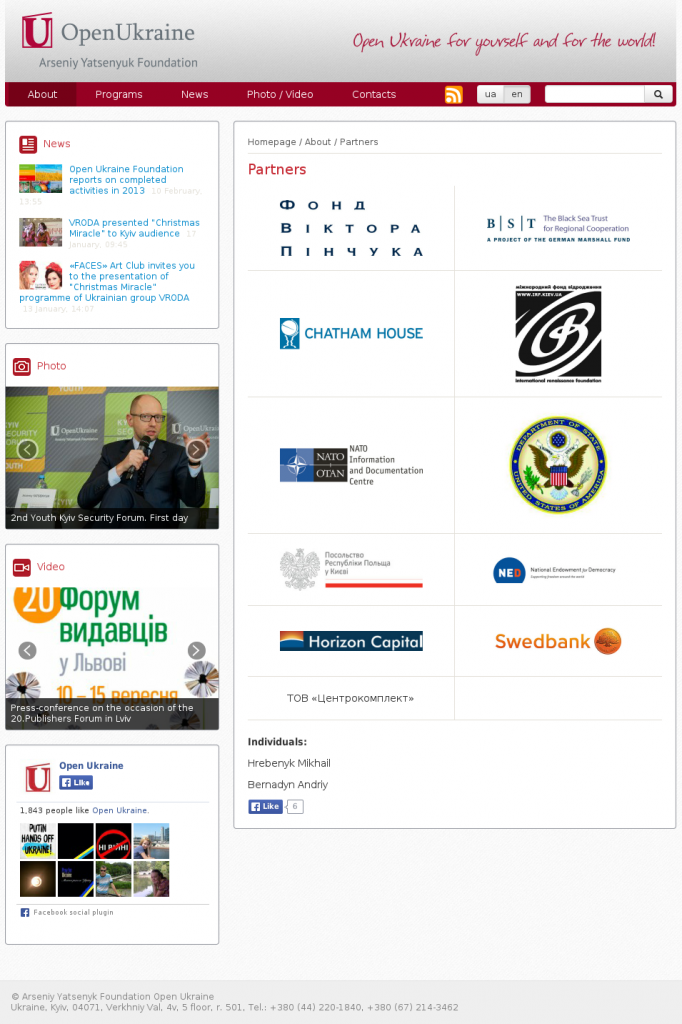 Since the 27th of February 2014 Arseniy Yatsenyuk is “prime minister” of the present and entirely illegal regime of Ukraine. As we have learned from the intercepted Nuland – Pyatt telephone conversation, he is the preferred candidate of Victoria “Fuck the EU” Nuland, which is the reason why the US State Department made him the top echelon of its coup.

Did you know that Mr. Yatsenyuk owns an organization called “Open Ukraine Foundation”? If you do, you might be surprised to learn that all traces of this foundation have been eradicated from the internet. The website of the Arseniy Yatsenyuk Foundation (openukraine.org) and its Facebook page (https://www.facebook.com/pages/Open-Ukraine-Foundation) have simply disappeared. The Wikipedia entry still exists, but the links lead nowhere.

As we know, the Internet forgets nothing and therefore a screen-shot of the website is still on hand. And what do we see there? A list of the foundation’s partners, and looking at it, you may say with some awe that it is an exceptionally impressive collection of the usual suspects. Which, we strongly suspect, must be the reason why the foundation is now defunct and its tracks have been obliterated.

What follows is an extract from the list of partners:

With such partners, and in this present scenario, it is small wonder that the page has been deleted. Because it can be clearly seen who stands right behind Mr. Arseniy Yatsenyuk and the coup.

Let us start with the German Marshall Fund, whose Chairman is Guido Goldman. His father, Nahum Goldman, was co-founder of the World Jewish Congress, Chairman of the Jewish Agency and president of the World Zionist Organization. Guido studied at Harvard and one of his teachers was the former presidential security adviser Zbigniew Brzezinski. Henry Kissinger later supervised Guido’s doctoral thesis. The money for the Fund has been approved by the former German finance minister Alex Möller. Who, on occasion of the 25th anniversary of the Marshall Plan, funded the organization with 150 million German marks for the next 15 years,  ostensibly to promotes relations between Europe and the U.S.

This context alone is revealing, since it cites some of the most virulent Russia Haters around.

But let us look at Chatham House. The Foundation, established in 1920, known until 2004 as the Royal Institute of International Affairs, is a private and world-leading British think tank based in London, whose members engage in study programs, working groups, roundtable conferences and seminars current issues and political events on an international level. The expertise and recommendations created there are circulated by the international members worldwide. Some key projects are funded and sponsored by the Rockefeller Foundation, the Bill & Melinda Gates Foundation, the Konrad Adenauer Foundation, NATO or the EU. In addition to the corporate members, consisting of 75 large corporations, plus investment banks, energy companies and 263 other companies, Chatham House currently has 2770 prominent personalities from 75 countries as members, all employed in business, diplomacy, science, politics and the media. A patron of Chatham House is Queen Elizabeth II.

This would sound like an absurd joke, weren’t it so truly awesome. Because now we understand clearly why the upheaval in Ukraine took place: the supreme fat-cats of the so-called World Elite wanted it to happen.

The NATO chiefs wanted the incorporation of Ukraine into this particular war club, so that missiles can be deployed even closer to Russia. In 2008 NATO secretary general Jaap de Hoop Scheffer paid a visit to Arseniy Yatsenyuk and his Foundation.

The U.S. State Department has been instrumental in the coup, as already mentioned with regard to Victoria Nuland and her now famous injunction. Doling out massive funds, it determined which puppets could join the regime and which not. Whereby that goof Vitali Klitschko got the short straw, just as the abominable noodle Nuland wanted it to happen.

The NED or National Endowment for Democracy is an American foundation with the stated objective to promote democracy worldwide. It is a [neocon front group that] was established in 1983 by the U.S. Congress, and receives its annual funding from the U.S. federal budget. Thus money directly milked from the U.S. taxpayer is diverted for the illegal regime change in Ukraine and many other countries.

This backdrop is very revealing. When Hedge Funds and banks such as Horizon Capital and Swedbank are affiliated with Yatsenyuk’s foundation, it is clear that they are the vultures who are waiting to plunder Ukraine. 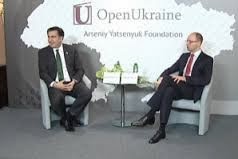 Saakashvili and Yatsenyuk at an Open Foundation Meeting

A good friend of Arseniy Yatsenyuk and his Foundation is Mikheil Saakashvili, the puppet installed by Washington [see here and here], who was allowed to play the President of Georgia from 2004 to 2013. The latest news concerning his person seem to prove that he is also a murderer. According to the Georgian newspaper Asawal – Dasawali he has been involved in the death of former Prime Minister Zurab Zhvania of Georgia. The Prosecutor’s Office of Tbilisi has discovered proof of Saakashvili’s direct complicity, the newspaper writes, citing a source within the investigation authority where a secret recording with the audible voice of Saakashvili can be heard ordering: “Get the corpse out of the way and do everything as agreed.”

Yes, such a fine “partner” used to be a guest of honour in the now defunct Arseniy Yatsenyuk Open Ukraine Foundation. Unusual is that even in the Google cache nothing about it can be found anymore.

Now we understand why Arseniy Yatsenyuk has been installed by Merkel and Co, the EU, the NATO and Washington as head of the Ukrainian “government.” He is simply the new puppet intended to implement their interests in Ukraine, but certainly not the interests of the Ukrainian people .

Posted Saturday, 8 March 2014 by  Freeman of All Noise and Smoke