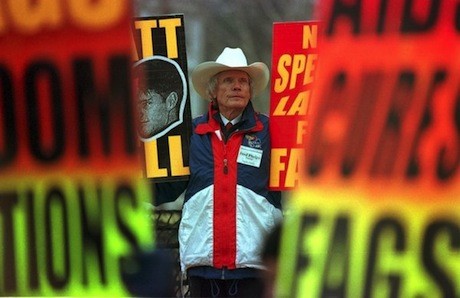 But how did an eccentric Kansas pastor with a tiny congregation become raised up as a hate symbol of the backward White population?  The answer is that Fred Phelps was a creation of the liberal media just as boy bands are manufactured by the record industry.

Until 2007 Phelps was just one of dozens if not hundreds of itinerant preachers in the South, and his Westboro Baptist Church has never numbered more than a few supporters, chiefly his family. That the family was eccentric and dysfunctional is hardly in doubt. One son fled the home at 16 to escape his father’s oppression.

Up until ten or so years ago his media high point was when he got some local publicity through a campaign against outdoor public gay sex. Accompanied by a handful of elderly followers and his own family members Phelps caused a mild stir by picketing an outdoor gay pick-up point in a public park in Topeka.

In truth this was no different to many campaigns across the Western world where concerned parents make futile complaints about being unable to take their children to public parks without exposing them to the sight of gay men having sex.

But in the subsequent local row, the media decided it was all about a fire and brimstone preacher threatening a helpless minority with eternal damnation. Then in 2007 came the publicity that turned Phelps into a national and international star. The BBC broadcast a documentary called “The Most Hated Family in America” which shot the Phelps clan into the media spotlight and into the pantheon of White hate figures.

It was hardly an in-depth investigation—- a film crew following eccentrics from the backroads of American culture is a staple of broadcasting in Britain; over the years hippie communes, hillbillies, UFO hunters and the like have all had British TV crews follow them around.

But unwittingly or not, film maker Louis Theroux had struck gold. His film played into a deep need in the liberal left for someone onto which to project the liberal hatred of southern religious Whites. In the Phelps’s the BBC had finally found the perfect representatives of that part of America that “takes refuge in guns and religion.”

The BBC cameras followed the family as they demonstrated at the funerals of American soldiers killed in Iraq. It was hard to think of a more incendiary act likely to inflame and when the film showed Phelps preaching hatred at the funeral of a gay man reportedly murdered in a homophobic attack, his reputation was made.  Phelps became the poster boy for White religious intolerance.

Not since Michael Moore — another documentary maker who got a big break early on via the BBC — has a programme had such a reception. The resulting media tsunami was unprecedented. The film has since been shown repeatedly on the  BBC and in networks in the USA, Australia and elsewhere. It has even been released on DVD.

Hundreds of print outlets around the world added their indignation and delight. Theroux was praised to the heavens for his film, as if it was a serious investigation instead of a quirky look at some weirdoes.

Certainly Phelps was the most biddable of stars. Where the idea to stage demos came from no one is sure, but nobody could ever claim Phelps shied away from the glare of publicity. It has long been rumoured that if an idea for an outrageous demo was dropped into his ear, he was more than happy to oblige.

Since then Phelps’ media career and the fame of the Westboro Baptist Church have gone from strength to strength.  Regiments of indignant  and delighted TV and print journalists have given national publicity to the “demonstrations” of a group that has rarely numbered more than half a dozen.

He was banned from entering Britain. He was involved in numerous lawsuits. Inevitably the church fell under the eye of the Anti-Defamation League and Southern Poverty Law Centre which gleefully catalogued them as being part of the White right. 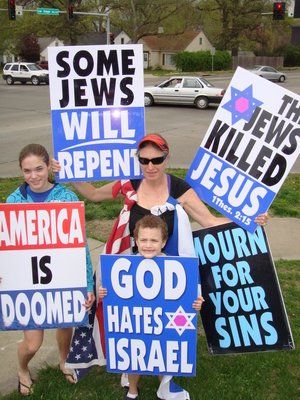 For the left Fred Phelps has been the gift that just keeps on giving. Probably his most notable achievement was bringing the First Amendment into disrepute when he won his legal battle to hold noisy demos at veteran funerals. He was protesting at the military employment of gays and lesbians but his noisy demos caused massive upset to grieving families — and dragged the reputation of the First Amendment into the gutter. This was a move the left have not been slow to exploit and in every debate about “the limits of free speech” you can be sure that the name of Fred Phelps and his graceless behaviour would be drawn in.

Not many will mourn the passing of Fred Phelps but it would not be surprising if some do.  Fred Phelps was an indispensable instrument in the victimhood myth of two crucial constituencies — the gays and the Jews. If they were looking a symbol of the demented religious White anti-Semitic, anti-gay fanaticism then they could not have done better than Phelps than if he had come from central casting.

Which in a sense he did.