Taking Blacks out of STEM – Science, Technology, Engineering, Mathematics – would be like taking pygmies out of basketball. You wouldn’t notice much difference. However, if you took White males out of STEM, the field would collapse. But that’s reality and what does reality matter in modern America? Here is an advert for the NSA, or National Security Agency, America’s premier practitioners of mass surveillance: 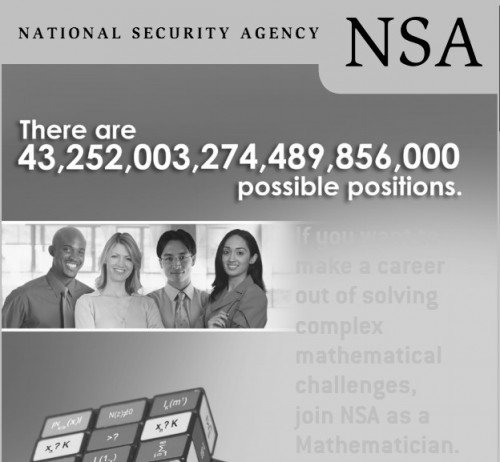 Can you spot any White males? Me neither. The NSA is committed to defending modern American values, which are based on fantasy, not reality. The fantasy is that Blacks and women are held back from high achievement in STEM by the prejudice of White males. The reality is that Blacks and women are biologically unsuited to the field. Some can do well there, but their representation falls as the cognitive load rises. NSA, like all other arms of government in modern America, is committed to reversing this unpalatable reality and to punishing White males for something that isn’t their responsibility.

In fact, the ad specifically calls for talent in meeting “complex  mathematical challenges.” Mathematics, with its high g-loading, is a field where African Americans are particularly underrepresented. A 2004 article in the Journal of Blacks in Higher Education notes that more than 41% of Ph.D.’s for Blacks were in the field of education. On the other hand,

the very large racial Ph.D. gap in the natural sciences is striking when we examine black Ph.D. awards in specific disciplines. For example, not a single African American earned a Ph.D. in astronomy or astrophysics in 2004. In all there were 165 Ph.D.s awarded in these fields. African Americans earned only 10 doctorates in mathematics. This was only 0.9 percent of all doctorates awarded in the field. …

Here’s another NSA image, taken from an animated advert in the careers section of its website.

That’s why modern America is doomed to collapse: more and more money is being taken from successful groups, like Whites in general and White males in particular, and poured into doomed attempts to raise the performance of unsuccessful groups, like Blacks and Hispanics. Because the successful groups are shrinking in size and the unsuccessful ones are growing, the U.S. government is like a giant Bernie Madoff. It’s running a Ponzi scheme involving trillions of dollars, not mere billions. The NSA is central to the scheme, tasked with defending the cabal of cultural Marxists and predatory capitalists who are steering America unflinchingly to disaster.

If you used NSA adverts to draw up a picture of STEM in 2014, you would conclude that the field is dominated by non-Whites and women. That’s the exact opposite of the truth. Everything the NSA does depends on the work of White males, but its attitude towards them is one of contempt. The U.S. government obviously wants to write White males out of the story of America. That will make the story more and more like a chapter in Gulliver’s Travels (1726), when Gulliver visits “the grand academy of Lagado”:

The first man I saw was of a meagre aspect, with sooty hands and face, his hair and beard long, ragged, and singed in several places. His clothes, shirt, and skin, were all of the same colour. He has been eight years upon a project for extracting sunbeams out of cucumbers, which were to be put in phials hermetically sealed, and let out to warm the air in raw inclement summers. He told me, he did not doubt, that, in eight years more, he should be able to supply the governor’s gardens with sunshine, at a reasonable rate: but he complained that his stock was low, and entreated me “to give him something as an encouragement to ingenuity, especially since this had been a very dear season for cucumbers.” I made him a small present, for my lord had furnished me with money on purpose, because he knew their practice of begging from all who go to see them. …

There was a man born blind, who had several apprentices in his own condition: their employment was to mix colours for painters, which their master taught them to distinguish by feeling and smelling. It was indeed my misfortune to find them at that time not very perfect in their lessons, and the professor himself happened to be generally mistaken. This artist is much encouraged and esteemed by the whole fraternity. (Gulliver’s Travels, Part III, chapter 5)