A peculiar thing happened while my liberal sister and I were driving near a Black area of Johannesburg on our way back to Pretoria from RO Tambo International airport — Anne expressed a palpable fear of being in proximity to the very people she’d championed less than two decades earlier.
My sister had not been back to South Africa for several years as she’d fled the country immediately after the fall of Apartheid. Like many wealthy liberals, she’d moved to Western Europe the moment the White-ruled government she loathed so much had been removed, and the ANC installed in its place.
I soon followed suit as literally everyone in my family, apart from my uncle, who’s since moved to Ghana for work, returned home to their countries of origin.
Within minutes of seeing predominantly Black faces carousing in the forecourts of the shanty town shebeens dotted along the M57 roadside — the sole toll-free highway connecting Joburg’s airport with Garsfontein, Pretoria, I began to realise my sister wasn’t exactly in her comfort zone.
“Do we have to drive through here?” She asked, as I turned and looked at her.
“It’s the only road to Garsfontein from Joburg airport.” I responded. “How else do you want us to get back to Aunty’s?”
“I don’t know. It just doesn’t seem like the sort of place we should be driving through.” My sister concluded, while nervously fumbling through her purse. (Anne is a staunch proponent of gun control in SA, the UK and US, so I doubted it was a pistol she was looking for.)
At first I wasn’t sure what to make of her request and conspicuous nervousness.
I didn’t want to assume that the impoverished Black faces eyeing the Land Rover I’d hired hours earlier, had spooked my sister, or the realisation that all that stood between us and actual Zulus was a bit of glass and aluminium, but I couldn’t think of anything else.
It was broad daylight after all, and it wasn’t like we were in the heart of Tembisa, Soweto or the Alexandria Township, where a bit of apprehension might be warranted. We were driving a route thousands of White, Black, mixed race and Indian South Africans drive to and from the nation’s capital on a daily basis.
“Is it because everyone’s Black?” I asked cautiously.
Anne stared at me, rolling her eyes, as if I was the one guilty of racism.
Like most liberals Anne, doesn’t have to share her neighbourhood with people that pose a threat to her, nor does she go hungry because Black Economic Empowerment precludes her from getting a job, as so many South African minorities do.
In spite of making a healthy six figure salary in Britain (sterling not rand), she’d struggle to find work in South Africa due to Black Economic Empowerment policies-an aggressive form of Affirmative Action, which has transformed one of the wealthiest nations on earth to little more than a banana republic in its death throes.
Like many Leftist elitists who’ve since left SA, she opts to spend her holidays in White nations like Ireland, Italy and Switzerland, while regularly decrying the Western culture she evidently loves.
When visiting the US-the nation she believes is “the most oppressive of Blacks on the planet”— she frequents locations like Sun Valley, Idaho, and the Sierra Nevada Mountains where she skis, Laguna Niguel in Orange County where she sails and flies, and the Napa Valley where she tastes wine and frolics with other wealthy westerners. Let’s just say Detroit isn’t going to be in her travel plans any time soon.

Let’s be honest. Like most liberals, my sister chooses to live as far away from black people and the Leftist policies that create societal discord, as humanly possible.

Yet, as a Liberal Marxist, Anne is still an ardent supporter of the ANC, and the policies that have seen South Africa degenerate from a first world nation, into an African warzone — where one in three women will be raped in their lifetime, and working on your farm poses a greater risk to well-being than serving in the nation’s police force. Farm murder rate of 132.2 per 100,000 people is more than double the murder rate for South African policeman at 54.4 per 100,000 people, and 32.2 per 100,000 for the country’s population as a whole – 2014 Afriforum and the Transvaal Agricultural Union Report, 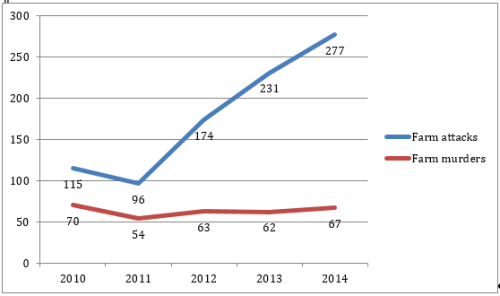 In fact Anne was an outspoken critic of Apartheid during the 1990’s, even campaigning for South Africa’s first Black president.
Although I see myself as a moderate, and in spite of the fact that our father faced discrimination for being half-Indian under Apartheid, as a pragmatist and racial realist, I was skeptical of any change that promoted handing a first world nation to sub-Saharan Africans. My concerns, when voiced, were always met with criticism, even accusations of racism.
Fast forward twenty years. The champion of Black civil rights and her racist brother are driving through a poor area dominated by the Blacks she helped empower through her activism. I’ve got no concerns whatsoever, as due to my work, I understand how and when violence occurs in SA.
My sister on the other hand, who’s led a sheltered existence since leaving the country in early 1995, is in full panic mode.
Still, knowing what I know about liberals and how I’d end up looking if I dared broach the subject of race at this juncture, I decided to leave the matter alone.
Some battles are best left for another day.
Although I will never fully understand my sister’s motivation for her continued support of the ANC and virulent anti-White sentiment, one thing I do know for certain is the next time Anne and I find ourselves together in South Africa, we’ll be driving through the nearest Black neighbourhood.
Jack Sen is a media spokesman for the British National Party as well as South Africa Front Nasionaal’s official representative in Great Britain and Europe. Jack represented UKIP at the 2015 general election as the party’s prospective member of parliament for West Lancashire.
https://www.theoccidentalobserver.net/wp-content/uploads/2018/06/TOO-Full-Logo-660x156-1.png 0 0 Jack Sen https://www.theoccidentalobserver.net/wp-content/uploads/2018/06/TOO-Full-Logo-660x156-1.png Jack Sen2015-07-08 09:27:262015-07-08 10:51:58Liberal Cognitive Dissonance on South Africa
140 replies