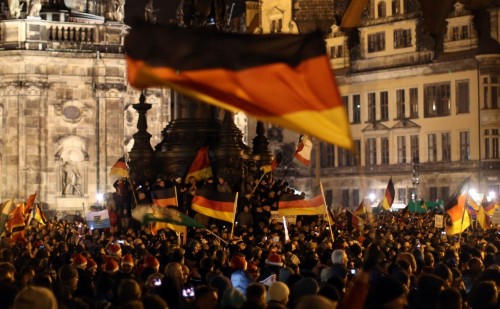 No foreign power is behind the European Resistance

With the people of Europe standing up against misrule, their rulers take comfort in the thought that a there must be foreign power behind it all.

In country after country, more and more are standing up against the ongoing policy of [White] genocide. Demonstrations are taking place in Germany, Italy, Sweden, France, the Czech Republic, Hungary and others. Some people even go a step further when they see that politicians do not care or even listen. The frustration propels them to desperate acts, and prospective refugee camps — empty buildings — are set alight.

To everyone it is obvious that the Resistance is a reaction to decades­old policies, as well as a reaction to the total mendacity of the press. Obvious to everyone, except those responsible.

When the Resistance can no longer be ignored, they look for new ways to explain its popularity. Instead of taking responsibility (a word, which otherwise is popular with politicians), they look for scapegoats. Lately that has been “a foreign power.”

The Swedish daily Dagens Nyheter[1] published an article today titled “NATO: Xenophobia is fueled by a foreign power.” The article’s thesis is that “a third­party works in secret to foment Xenophobia in Europe.”

The source of this claim is the NATO Strategic Communications Centre of Excellence in Riga. Its chief, Janis Sarts,[2] is quoted in Dagens Nyheter saying:

We see similarities in three areas: how information circulates, its quality and content, and what type of content is emphasized. They try to play on the society’s instinctive fear of the unknown.

Yes, of course! That must be it!

The denial of reality continues unchecked. That Europe is being invaded by aliens is not the cause of the growing Resistance, clearly it isn’t. Nor the fact, that Europeans see their homelands capitulating to fortune­seeking ingrates, who only demand more concessions. Nor the concern, that violence and crime will increase. No, none of these is the cause.

Clearly, it is all the fault of a foreign power, and — we read between the lines — that power is Russia.

But was it also Russia’s fault five, ten, twenty years ago? The national opposition has grown year after year as a consequence of the policies pursued in European countries. Russia has nothing to do with that. Or does it? Did Putin dictate policy to the European politicians? If so, that’s yet another reason to do away with the European politicians.

No, one cannot think so highly of NATO.

The national Resistance in Europe is European and will remain so. This is our cause! The opposition grows not because of “a foreign power,” it grows because the Europe we love is threatened by an internal enemy that has maneuvered into the halls of power and dominates the newspaper editorial boards.

Politicians and journalists in their bubbles cannot comprehend that the silent majority is a fact, or, for that matter, that they are beginning to break their silence.

Politicians, journalists: do not blame Vladimir Putin when Europe rises! The failure is wholly on your heads.