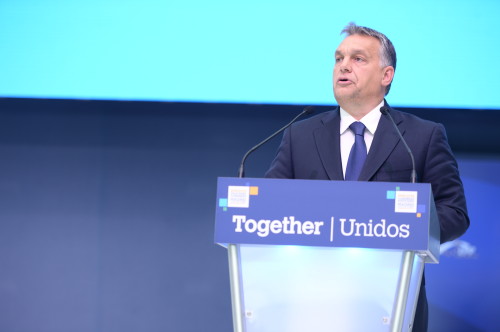 Hungarian Prime Minister Viktor Orbán is, by far, the most effective political leader in office today in defending the interests of the indigenous peoples of Europe. His creation of a border fence has all but shut down the migrant invasion of his country. Zsolt Bayer, a co-founder of Orbán’s Fidesz party, has even explicitly discussed White interests in the context the migrant crisis: “This [immigration] is the weapon that they, the invisible hands, have employed against Europe and against the White race.”

Thus a ruling political party in Europe, in a mainstream conservative group, is discussing and to some extent governing according to our legitimate interests. This is good food for the soul of every White Advocate, more used to demonization and ostracism since the ethnically-motivated pseudoscience of Franz Boas, Theodor Adorno, and Stephen J. Gould has become culturally hegemonic.

But Orbán is not merely content to save his own nation. Indeed, he has endlessly lectured his fellow European leaders to take mass immigration seriously as the existential threat that it is. In particular, the Prime Minister recently chose to dedicate an entire speech at the European People’s Party (EPP) annual congress exclusively to the subject of immigration. The EPP is the European umbrella grouping of mainstream conservative and Christian-Democratic groups, which includes both Orbán’s Fidesz and German Chancellor Angela Merkel’s Christian Democrats. Congress attendees included Merkel, Spanish Prime Minister Mariano Rajoy, European Commission President Jean-Claude Juncker (who gave, in contrast, an unbelievably feckless speech), and many other European political bigwigs.

Orbán recalled some basic principles (such as the fact there is no right to immigrate to Europe) and appealed to the political interest of his conservative colleagues, to democratic principles, and to the fate of Europe:

Today I would like to speak about the migration crisis. This issue will determine the future of our political family. We are in a deep trouble. The migration crisis is able to destabilize governments, countries and the whole European continent. . . .

The danger we have been facing demands open and honest speech. First of all, dear Friends, what we have been facing is not a refugee crisis. This is a migratory movement composed of economic migrants, refugees and also foreign fighters. This is an uncontrolled and unregulated process. I would like to remind you that free choice of a host country is not included in the international law. I also want to underline that there is an unlimited source of supply of people, after Syria, Iraq, Pakistan, Afghanistan, Africa is now also on the move. The dimension and the volume of the danger is well above our expectations. . . .

But considering them [migrants as] victims must not turn ourselves into being victims. Just because we do not consider them enemies we must not act against ourselves. Our moral responsibility is to give back these people their homes and their countries. [. . .] But neither the German, Austrian nor the Hungarian way of life is a basic right of all people on the Earth. It is only a right of those ones who have contributed to it. Europe is not able to accept everyone who wants a better life. We have to help them to get back their own lives with dignity and we have to send them back to their own countries . . .

Let me draw your kind attention to the fact that European Christian democratic approach doesn’t tolerate any anti-Muslim policy. Muslim faith which we honor and respect is not responsible for the root causes of this mass migratory movement. . . .

Orbán makes the elementary point that European elites’ management of the migrant crisis does not follow basic democratic principles: The liberal media misrepresent the crisis to pull on our heartstrings, while the governments ignore public opinion’s opposition to immigration:

We cannot avoid speaking about the quality of our democracies. Does it comply with the freedom of information and speech that medias usually show women and children while seventy percent of the migrants are young men and they look like an army? How could it happen that our peoples feel that their opinion is not being put into consideration? And we have to address the question whether our people want what has been happening. Did we get authorization from them to allow millions of migrants to enter our continent? Did we get authorization not to comply with the Schengen regulations for months? No, distinguished Delegates, we did not. And it is not a convincing argument any more that what we have been doing is because of emergency. I believe we have to gather all our courage, we have to throw away PC-ness and we should launch a big debate. We have to discuss our own intentions regarding our own continent without hypocrisy and pharisaism. What do we think about our civilization heritage? Can the change of cultural pattern be forced externally? Do we accept parallel societies? Or we defend our tolerant and rule-of-law-based way of life we have lived so far?

The mention of “pharisaism” refers to the Pharisees, who founded Rabbinic Judaism and were condemned by Jesus Christ, may be considered an innocuous conservative Christian and/or anti-Semitic reference.

Orbán urges Europeans to be self-reliant and to not depend on the Turks for our security:

Europe is currently rich and weak. This is the … most dangerous mixture [possible]. We seem not to be able to overcome our challenges on our own. Turkey is an important strategic partner. But if based on the lack of our own power we [must] expect [that] the solution from them … will make us exposed. This is the current situation of Europe. If we do not want that we have to protect our borders. If we are unable to do so at Greece which is the Eastern gate of the Balkans and the first line of defence than we have to do it at the Western gate of the Balkans at Hungary and Slovenia.

Orbán condemns the Left for importing voters through immigration, which you would think would resonate with his audience of conservative politicians (minorities overwhelmingly vote for the Left), and as part of a broader anti-national and anti-European political project:

We cannot hide the fact that the European left has a clear agenda. They are supportive to migration. They actually import future leftist voters to Europe hiding behind humanism. It is an old trick but I do not understand why we have to accept it. They consider registration and protection of borders [as] bureaucratic, nationalist and against human rights. They have a dream about the politically constructed world society without religious traditions, without borders, without nations. They attack core values of our European identity: family, nation, subsidiarity and responsibility.

We are the European People’s Party — Parti Populaire, Volkspartei, Partido Popular, Party of the People — our responsibility is towards the people. Listen to the people. Let’s be determined, let’s defend Europe. Do not let the leftist mess up and reconstruct Europe! And do not let them oust the soul of Europe! Do not let liberals and socialists take away Europe from the people!