As a footnote to Guillaume Durocher’s “Poland Rearms in the Demographic & Cultural War (as EU and Germany Impotently Protest),” Zerohedge has a nice blog reporting on the downgrade in Polish government bonds as a result of Poland standing up to the EU and Germany.

Over the past week, Poland’s relations with Europe have gone from cordial to abysmal, when first Poland’s new Eurosceptic government compared the EU and Merkel to Nazis, with Polish weekly Wprost releasing the following cover saying “they want to supervise Poland again”… 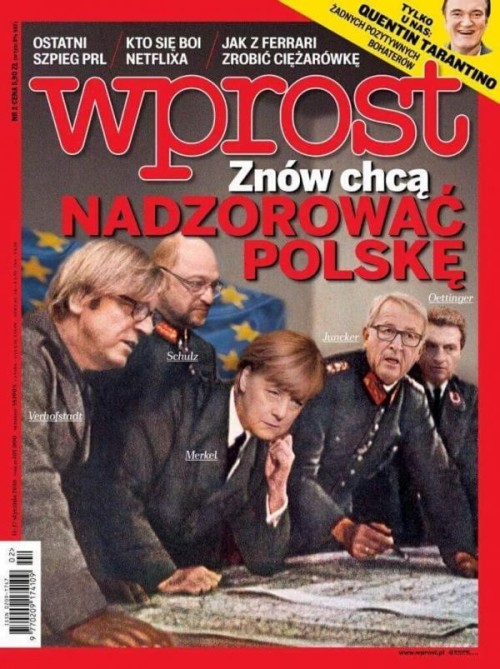 … only for Brussels to retaliate and launch an “unprecedented” review of Polish media laws, a move which Poland angrily responded is far beyond the EU’s domain.

Well, as so often happens, whenever there is a political spat in Europe, the rating agencies are quickly involved (think S&P and Moody’s downgrades and upgrades of Greece depending on how well the vassal nation is “behaving”), and moments ago S&P downgraded Poland from A- to BBB+ outlook negative, precisely due to Poland’s new media law which has been the topic of so much consternation over the past week.

In other words, S&P is now nothing more than a lackey for Brussels, threatening to send Polish yields higher if Poland does not fall in line.

The report notes, “The government’s new media law, as another example [threatening Poland’s credit worthiness], gives the government extensive powers to appoint and control the directors and supervisory boards of public broadcasters.” One wonders exactly how such powers are supposed to affect the Polish economy in a way that would warrant the  downgrade. It’s never made clear. One could only wish that a populist US government would clean house of the multicultural lefties at NPR and PBS, and I rather doubt it would hurt the economy.

The report also states, “Pronouncements about … the refugee crisis,  may heighten tensions between Poland and many Western-European EU states.” The logic seems to be that a sound economy absolutely requires knuckling under to the EU and Germany on refugees. Because, as we all know, refugees are enormously beneficial to the economy and more than pay for themselves. Oh wait, refugees cost Germany along at least 17 billion euros ($18.6 billion) (another  estimate, 21 billion euros ($22.6 billion)). So why not downgrade Germany because of their added debt — and the increasing tensions with the far saner countries of Eastern Europe, Poland, Hungary, et al.?

Of course, Standard and Poor’s has nothing but the highest ethical standards and would certainly not let its politics affect its ratings. Well, maybe not. In February of last year they paid $1.5 billion in fines for their behavior during the mortgage meltdown.