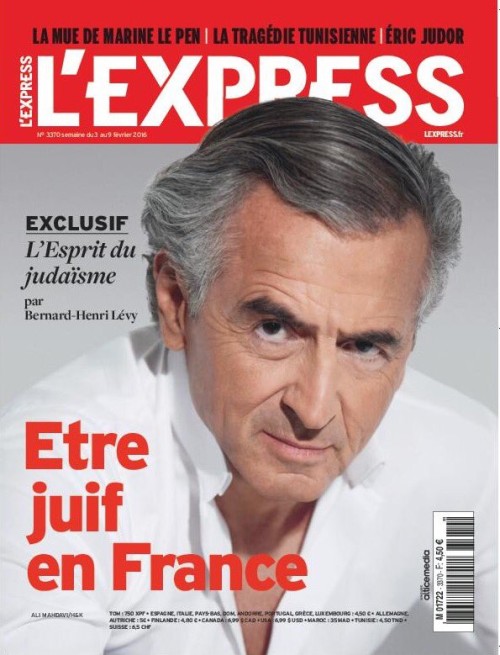 I cannot think of a Jew who has done more to promote “anti-Semitism” in recent years than Bernard-Henri Lévy. He seems to be completely unselfconscious and oblivious to what he is doing.

The latest example has been Lévy’s going on French radio to promote his most recent book, “on which [he] has been working for 20 years,” called L’Esprit du Judaïsme (The Spirit of Judaism). Lévy’s books don’t sell and are even mocked as inane and narcissistic in mainstream Anglo-American media. And yet, The Spirit of Judaism is already enjoying a cover story in L’Express magazine. L’Express incidentally has a circulation of almost half a million and incidentally is owned by his fellow Zionist and co-ethnic Patrick Drahi.

Enjoying systematic promotion in the mass media despite his evident nullity, Lévy has for years been the visible tip of the iceberg of the influence of ethnocentric Jewish networks in France. For many, he has been the spark to their awakening to the Jewish question.

Lévy has made a number of surreal tweets summarizing his talking points on the radio show — the usual warmongering and hypocritically anti-French-nationalist statements — followed by the hashtag #SpiritofJudaism to promote the book. He is thus openly suggesting, in a shockingly unselfconscious way, that his evil views derive from his Judaic ideology.

Hence Judaism is anti-nationalism (for non-Jews):

“It is universalism which I am defending in this book. #SpiritofJudaism”

“I have no regrets. One cannot regret saving a population from a massacre. #Libya #SpiritofJudaism”

“The absolute mistake of the international community was the non-intervention in Syria. #SpiritofJudaism”

Lévy has previously said that he pushed for war in Libya “as a Jew” and with “faithfulness to Zionism and to Israel.”

French nationalists should continue to be excluded from power:

“The old French anti-Semitism is still alive. The FN has not really changed. #SpiritofJudaism”

On the other hand, opponents of Jewish ethno-nationalist wrongdoing are warmongers:

“The people who advocate the boycott are not for peace, but for war. #BDS #Israel #SpiritofJudaism”

Finally there is the usual dollop of sheer self-contradicting nonsense, with no other purpose than rationalizing Jewish privilege:

“The great question of Judaism is that of otherness, thus the opposite of communitarianism. #SpiritofJudaism”

For anyone else, such obviously nonsensical statements would be considered a sign of mental illness. Ethnocentrism is universal and ethnic double standards are common throughout the world (e.g., it is not unusual for violence against another people to seem trifling compared to violence against one’s own). But here this psychological mechanism is hypertrophied to a truly absurd degree, completely overwhelming basic reason, self-awareness, or even simple common sense.

Lévy really is nutty in a way which is difficult for us to fathom. Which of us can even contemplate the wiring in that brain?

I am only half-joking when I say that Bernard-Henri Lévy has perhaps done more to undermine Jewish privilege and hypocrisy than anyone else in the world today. His every media appearance is like a crash course in The Culture of Critique. Without him, Alain Soral or Dieudonné would have not have been quite as successful as they have been in preaching the anti-Zionist gospel (and for “Zionism,” read: “International Zionism” or “liberal-Zionism”) throughout the French-speaking world.

Anyway, I won’t be reading Lévy’s new book. Once you’ve got the message, you’ve really got to hang up.