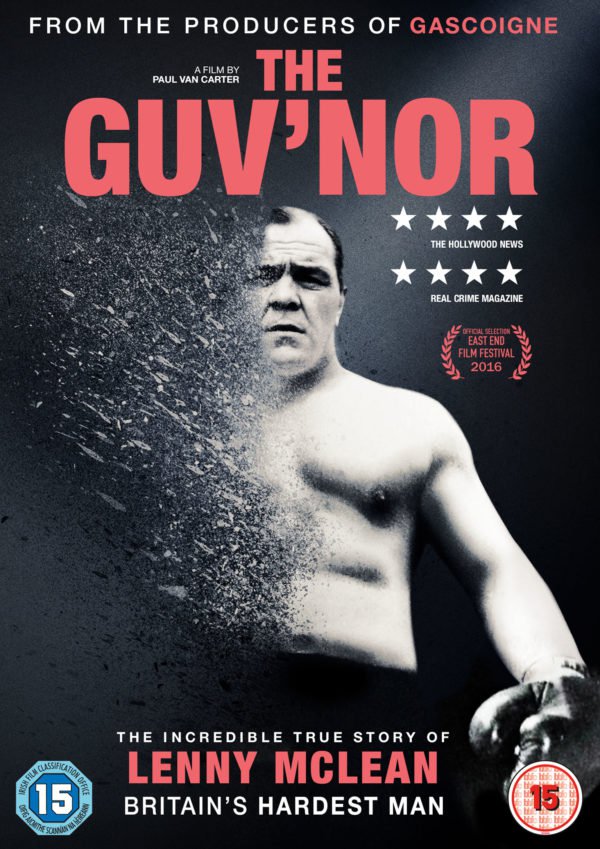 “Though he is not of the age group, he is one of the old school in principle. Also, he is definitely a positive thinker, yet without it becoming a task in life. He always keeps his word and values his friends. He chooses his company carefully so that he only has good people around him. He also has the unusual combination of brains as well as brawn. My friend Lenny does not give up easily. He is a legend in his own lifetime and he become a legend on his own merit. Above all, he is a man.”
– Notorious East London Gangster Reggie Kray, on now deceased underground boxing legend Lenny McLean.

Since the dim red dawn of man the aspiring young from every economic class have sought to distinguish themselves through ritual combat. Whether pauper or prince, the blood you let and the blood you lose are the currency for masculinity.

The Guv’nor (2016) is a feature length documentary film about the life and times of Lenny McLean, told from the perspective of his son Jamie. It is a directorial debut for Paul Van Carter, who’d previously worked as a miscellaneous crew member for Nicholas Winding–Refn‘s Bronson (2008) — the story of another English underground boxer that the United Kingdom could not tame.

It is a story (((many))) would rather not have told. The story of a devil-may-care White warrior. Of a man who refuses to validate himself to the world and the status quo of polite British society. There has been a resurgence of interest for combat sports among the White youth of the West since Tyler Durden showed us the way to Paper Street Soap Factory. Lenny McLean was a twentieth-century gladiator who rubbed elbows with London’s most notorious, produced what is arguably one of the best autobiographies any fighting man has ever authored, and in the twilight of his life was immortalized by Guy Ritchie in Lock, Stock & Two Smoking Barrels (1998). Few possess the requisite combination of courage and charisma to fight their way up from nothing and stand tall on the silver screen. Fewer still would lay their soul bare through an intimate portrait of their life shared in the pages of a best seller.

Men like that are dangerous. It’s not that they can break your jaw. It’s that these are White men who will shatter your illusions.

Lenny McLean grew up on the mean streets of Hoxton in London’s East End. His father, a World War II veteran, was buried in a pauper’s grave when Lenny was only six, after his health deteriorated from a disease contracted in India. His mother Rose remarried to an abusive, alcoholic conman named Jim Irwin. By the age of ten Lenny had suffered multiple broken bones. But it was on one cold winter’s day when Jim Irwin belt-whipped his infant brother Raymond for wetting the bed that Lenny had finally had enough. Seeking the help of Nanny Campion — an older member of the caravan (what we yanks would call a trailer park) — he wheeled his kid brother over in a homemade go-kart to display the sort of abuse his youngest sibling had suffered. His Uncle Jimmie Spinks was called in. 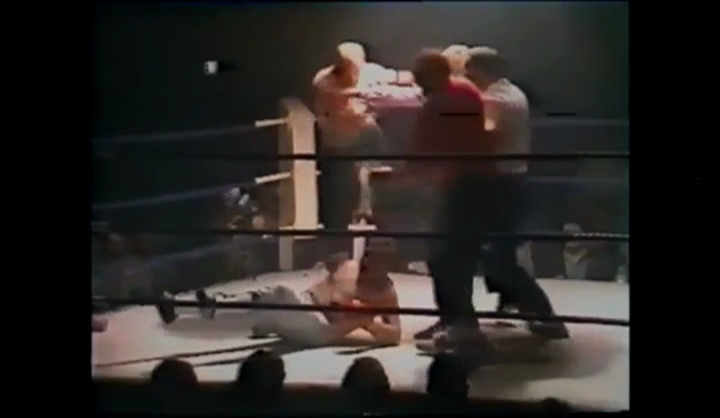 The British have always been resourceful during times of economic downturn. Jimmie liked to use a straight razor. Nanny’s weapon of choice was a heavy oversized glass ashtray. Jim Irwin crawled out of the caravan a bloody mess that night. No one heard from him for two solid years. Lenny McLean had finally found a father-figure for his formative years. This would be the first problem he had solved by his association with organized crime, in this case — family.

Stomping White fragility into the canvas looks easy for the towering bare knuckle brawler from Britain. At the age of fifteen Lenny McLean was sent to prison for two years for the possession of a knife. He came out not only hardened by his time behind bars, but he’d experienced a growth spurt. The boy had become more than a man. He was an uncaged monster. By 21 his violent reputation preceded him, and the local pub kept his picture behind the bar with the express wishes “not to anger this man.” His mother passed, and he took to drinking. Until the day someone picked a fight with big Lenny and he pounded the man into the cobbles in front of the pub. He pounded him until both of his hands broke. Then he attempted to bite out his throat, but instead consumed a couple mouthfuls of human flesh only to be vomited up later at the hospital. When he sobered up the next morning and realized what he’d done he became a teetotaler from that moment on.

His son Jamie McLean went to great lengths to talk to family members and track down rare footage of early underground bouts. In addition, the film contains valuable interviews with the men of his father’s day who sweat and bled with the man. The viewer is treated to an authentic look to England’s working poor, and how they developed an organic pugilistic style that comes from the garages and countryside more than the cobbled alleys and pub doorways of Britain — or its plush air conditioned boxing gyms. Lenny McLean was a fighting man honed by his ethnicity. Taught to train and fight the way of his people.

It’s at the 22-minute mark that the nationalist will get hooked as we watch a montage of the history of bare-knuckle fighting dating back to the ancient Greeks. The Hellenes saw boxing as the sport of the gods — what the divine must do for recreation. Uncle Adolf himself would advocate the sport (along with jiu-jitsu) as the ideal way to train the Aryan [1]. It’s the kind of White history we’re looking for. The documentary goes on to mention that it was only in the 1970s that bare knuckle fighting made a comeback. No coincidence to those who’ve read Spencer Quinn‘s “On Whites and Fighting.“ When professional boxers switched to 16 ounce gloves, all that padding allowed for speed to dominate, whereas raw powerhouse blunt force trauma was no longer the priority. Blacks began to win, scoring more points and taking less punishment. In a bare knuckle match, just like the MMA, no one breaks the clinch. If you get your hand on the back of the head of your opponent you simply pull it downward and hit them on the chin with an uppercut. They can’t run around and play keep away. Often the matches among the caravan families would be inside a very tight square made out of bales of hay. Striking on the ground is absolutely acceptable. It’s White fighting. Raw, powerful. Reliant on upper body strength and the ability to think on your feet during adrenal stress.

In The Guv’nor we’re educated in the history of a sincere and authentic ethnic style of combat, and why it is the methods of the poor disenfranchised Whites to rise from the ashes and demand the respect of ‘cultured’ elites whose bourgeois lifestyle of ease and comfort is disrupted by the brash and the burly. It’s something to be thankful for. A reminder of what it is to be truly English.

Lenny McLean’s rags-to-riches story is more pertinent now than ever. This same ‘sweet science’ — this dance of violence — has produced a titan from the English countryside. Lulled into a seeming passivity to Black domination of sports, organized boxing’s promoters couldn’t imagine the like of Tyson Fury. Six feet-nine inches tall. Tyson Fury not only carries on the mantle of Lenny McLean as a proud member of an Irish Gypsy caravan bare-knuckle boxer family (both sides), but sets a new standard. Taking the same training McLean did to heart, Tyson Fury recently became heavyweight champion of the world, having united all of boxing’s heavyweight titles (four belts, WBA – IBF – WBO – IBO). Fury is known for dropping red pills such as this notorious video where he makes fun of the new pro-tranny standards of media and admonishes those  “brainwashed by all the Zionist jewish people who own all the banks and TV stations.” 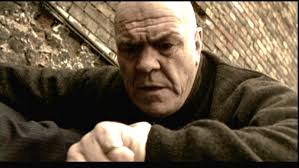 But there is a specter haunting the world of combat sports — one that afflicted both Lenny McLean and Tyson Fury. Mental health. Most people avoid fights. They don’t go 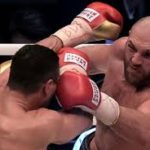 looking for them, and they don’t agree to them and spend weeks anticipating them. For most of the people reading this article, the only fights they’ve been in were to respond to the situation they were in at the time. You have to be a little nuts to try it. The constant attention would drive most of us stir crazy. At the end of The Guv’nor Jamie McLean reveals that his father had OCD and often saw him repeat tasks until they felt right to him. Even if that meant walking back to the destination he’d come from in order to count his steps again.

At the time of this writing Tyson Fury vacated his heavyweight titles (still undefeated) to seek treatment for manic depression. These are the personalities who write history in blood. They’re different. They’re damaged. They’re the fools who rush in, and we love them for it. They’re fighters.