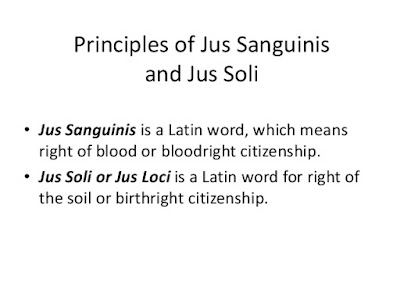 To most Westerners today, the words ‘nation’, ‘nationality’ and ‘law’ seem only to mean the state, citizenship and legislation enacted by the state. But there are other meanings to these words, which were their primary and even sole meanings in the past. The nation was once the ethnic group, the tribe at large — nationality being one’s ethnicity. Likewise, in Europe the law was once the customs of the kin-group. So how is it that kinship is not only ignored by Western states as the criterion for citizenship but is even unheard of to most? And is there a future for the original understanding of these words?

Historically, nations (in the truest sense of the word) decided personhood and rights-exercising ability based on their being a member of the kin group, not according to whomever the state decided was welcome to citizenship of that nation. Ricardo Duchesne (whose work has often been discussed on TOO) rightly points out that even the rise of Western nation-states, including the US, was not based on civic nationalism, noting their ‘White-only’ immigration policies. He writes,

The nations of Europe were not mere “inventions” or functional requirements of modernity, but were factually rooted in the past, in common myths of descent, a shared history, and a distinctive cultural tradition. While the rise of modern industry and modern bureaucracies allowed for the materialization of nation states in Europe, these nations were primordially based on a population with a collective sense of kinship.

Aliens have always been granted special rules, notably, being treated according to the law of their own people; this wasn’t because they had the wrong passport, but because they were simply not of one’s nation. Many today will presume this was just ancient tribalism, fueled by irrational xenophobia. However, as Duchesne notes, modern liberal democracy of the West denies the biological impulse to protect one’s own and mistakenly assumes that this denial and even the individualistic, classical liberal ideals of the West, are shared by all the peoples of the world:

Humans are social animals with a natural impulse to identify themselves collectively in terms of ethnic, cultural and racial markers. But today Europeans have wrongly attributed their unique inclination for states with liberal constitutions to non-Europeans. They have forgotten that liberal states were created by a particular people with a particular individualist heritage, beliefs, and religious orientations… They don’t want to admit openly that all liberal states were created violently by a people with a sense of peoplehood laying sovereign rights over an exclusive territory against other people competing for the same territory. They don’t want to admit that the members of the competing outgroups are potential enemies rather than abstract individuals seeking a universal state that guarantees happiness and security for all regardless of racial and religious identity.

This liberal ignorance of racial impulses only really became institutionalised in the 1960’s, with the rise of cultural Marxism. Of course, it became more fashionable to distance oneself from ethnic and racial discrimination as this became increasingly associated with the defeated nations of World War II (as though they were the only ones with such considerations). But, as with much of classical liberalism, the basis of this anti-racialism was inspired by Christian and Roman influences on Western civilization. While Duchesne has shown that Greco-Roman concepts of citizenship were not necessarily intended to be universalistic in any multi-racial sense, Roman Christianity has always lent itself to that interpretation of the Roman Law which was promulgated with corporate statism throughout Northern Europe. The message of Paul is clear:

Rom 10:12 For there is no difference between Jew and Gentile — the same Lord is Lord of all… (New International Version)

Combined with the demonisation of those who sincerely take racial and unique biological tendencies toward individualism rather than ethnically defined groups, Western nations were primed to accept universalistic and civic notions of citizenship.

The law of citizenship around the world is based on the two Greco-Roman legal concepts — jus sanguinis (right of blood) and jus soli (right of soil). The latter grants citizenship if one is born within the national territory, as is presently the practice in the U.S. (birthright citizenship). Typically, the right of blood, that is, citizenship granted to children of citizens, is not really a radical alternative, as this most commonly goes hand-in-hand with jus soli.

The Constitution of Liberia, which limits citizenship to “persons who are Negroes or of Negro descent” and the original United States Naturalization Law which limited naturalization to immigrants who were “free white persons of good character” are examples of jus sanguinis. However, most Western nations have adopted the “proposition nation” idea of civic nationalism where citizenship is only a matter of accepting principles like democracy and constitutional government. Only a few decades ago, the term ‘British’ still primarily had an ethnic meaning but, today, the civic meaning is dominant by far.

This is an unsustainable mistake which leaves the ethnic groups of Europeans vulnerable to those aliens who are conscious of their ethnic loyalties and are willing to take advantage of the democratic system which pits all conceivable groups against each other in competition to wield political power. We cannot ignore the fact of ethnic nepotism — we are all, as individuals, in competition with others over resources in order to achieve our aims, whatever they may be. And, stoked by the identity politics of the left, group membership continues to function as an important source of identity. Competition therefore becomes between-group competition which Whites will lose in the long run as the demographic tide turns against them.

The concept I propose, of folk rights or “kinship personhood,” takes these matters into account to identify the natural order. To be achieved, we must begin by repealing birthright citizenship and thus re-institutionalize the right of blood. How can this be justified?

Biology draws a line within which it is rational to extend our altruism. Ordinarily, we only really care about our immediate family. What sort of parents wouldn’t put their child’s interests before those of another? But, Frank Salter, in On Genetic Interests: Family, Ethnicity, and Humanity in an Age of Mass Migration, argues that widely separated human groups share a substantially greater percentage of their genes with other members of their ethnic groups. These biologically related populations therefore serve as reservoirs of genetic interests. These interests are best protected with laws of jus sanguinis.

Biology therefore sets natural boundaries for whom we are prepared to extend our individual recognition of kinship to. This not only makes the ethny the most practical focus of self-interest, but it also explains why human societies have near-universally done so as matter of intuition. Members of our ethnic/racial ingroup should be seen as family, albeit less related than biological families, but definitely far more closely related than people from different races. Those who point to vague boundaries between groups should recognise that, for example, as Ricardo Duchesne has documented, our nations have been largely ethnically homogeneous throughout their history, until the very recent onslaught of non-White immigration into European-dominated areas. The Japanese, as one of many other examples, do not have a problem identifying their own. Population genetic research has conclusively shown genetic discontinuities between the major human races.

As a strongly libertarian lover of Western civilization, to which such individualism is unique, it is important to me that the natural, sociobiological order of the European civilizations be maintained. It is indeed in our self-interest to do so, but self-interest is the prime law of nature, and the individualism so loved by libertarians will be a distant memory as societies are increasinly dominated by groups that are not at all inclined to individualism. Living now in the post-migration, multi-racial West composed of competing groups defined on the basis of ethnicity and race, we must realize that our legitimate self-interest aligns with furthering the interests of our ethnically and racially defined group.

Richard Storey is Master of Laws and a contributor to Ocean Drive. This is an edited version of a previously posted version at the website of the Council of European Canadians.