From The Irish Savant, originally posted on Friday, 11 November 2016 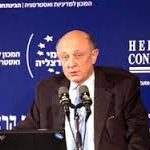 In common with many Trump supporters on the alt-right I’ve long harboured a horrible doubt that – just maybe – he was a huckster using his marketing genius to tap into the zeitgeist, leveraging it to close the ultimate sale. Did he really plan to get on with Russia, de-fund NATO, pull American troops out of the Middle East (i.e. stop fighting wars for Israel) and instead focus attention and resources on domestic issues? If that represented his true beliefs, then he literally could not have made a worse choice for National Security Adviser.

Former CIA Director James Woolsey recognised early in his career the boundless opportunities open to an energetic shabbos goy. Shamelessly throwing in his lot with the Israeli-Jewish power structure, he became rich and powerful despite (or by way of) being mired in corruption and conflict of interest at every stage.

And he repaid his benefactors in full, enthusiastically supporting the slaughter and destruction in Iraq, Libya, Lebanon and Syria. On cue he’s now agitating for war with Iran and for taking a ‘tough stance’ with Russia. He endlessly proclaims Israel to be “America’s greatest friend and ally”. His pandering on occasion has even embarrassed many American Jews, such as when he claimed that spy Jonathan Pollard was in jail only because of his Jewishness.

He’s the Neocon’s Neocon and Trump’s stated position is not compatible with his. Someone will have to concede. I’m not optimistic.