Trump supporters are still reeling from the ability of the courts to paralyze his presidency. This is due to a thoroughly biased courts and legal system, filled with liberal lawyers and judges — churned out by ideologically corrupt law schools and universities — who arrogantly impose their tyranny. They sanctimoniously trot out the holy Constitution to say that Trumps’ executive orders are ‘”unconstitutional,” which simply means that liberals disagree with them. They invoke the Constitution as though it were a law of physics: unambiguous, objectively and eternally true. Any reader will know that the constitution is a joke, whose interpretation can change radically depending on who sits on the bench or who tilts the ideological balance of the Supreme Court. 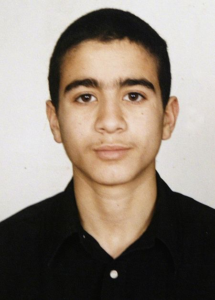 ‘Canadian’ Omar Khadr was captured in Afghanistan in 2002 while fighting with the Taliban. (source: Wikipedia)

Here is the story: Khadr is a Canadian citizen and Al Qaeda fighter who was captured in Afghanistan in 2002 during a firefight in which U.S. troops were injured and killed. He was then detained in Guantanamo for about ten years and pleaded guilty, among other things, to “murder in violation of the laws of war.” During that time, he was interrogated on a number of occasions by Canadian intelligence officers doing a normal job of collecting information on one of their citizens accused of terrorism, especially given the fact that he would eventually be transferred back to Canada.

In 2010, Canada’s Supreme Court ruled that these interrogations “offended the most basic Canadian standards of the treatment of detained youth suspects” and that the involvement of Canadian officials in the interrogations violated his rights under the Canadian Charter of Rights and Freedoms. This Charter is holy scripture in Canada, comparable to the U.S. Constitution or the Civil Rights Act of 1964. It is relentlessly invoked by Canadian liberal activists to justify their endless demands when it comes to protected groups like racial minorities or homosexuals.

This ruling is ludicrous: Khadr was detained by U.S. military authorities in Guantanamo and it is therefore very hard to blame the Canadian government for that. Moreover, videos of these interrogations exist and were even featured in a propaganda film made by human rights activists—called You Don’t Like the Truth: Four Days Inside Guantanamo—in 2010. This film contains nothing convincing: some of those boring and uneventful interrogations interspersed with interviews of Khadr’s lawyer, cellmates, relatives, and human rights activists complaining (sometimes rightfully) about the conditions of his detention in Guantanamo by U.S. military authorities. But the case for implicating the Canadian government and forcing taxpayers to make a multimillionaire of Khadr is as flimsy as it can be. The legal argument presented by Khadr’s lawyers is twisted and circumlocutory to an extent that only a member of a fashionable minority benefitting from the full support of the politically correct press, activist lawyers and biased courts could possibly sell it. Only the most conspiratorial liberal mind could see a responsibility lying with the Canadian government.

Some comments on these interrogation videos clearly capture the delirious mood of the media regarding that story. Andrew O’Hehir wrote in Salon that

Based on what we see in the painful, revealing documentary […], Khadr became a sort of ritual sacrifice by the Canadian government, an offering to its American allies and/or overlords.[1]

On an equally conspiratorial tone, Peter Bradshaw wrote in The Guardian that

His unseen interrogator here is a Canadian intelligence officer […] permitted by the Americans to question the prisoner on the understanding that a friendly seeming fellow countryman might cause Khadr to open up and give the US valuable intelligence. So far from being a respite from torture, this insincere friendly chat is a hideous refinement of cruelty: a horrifying turn of the screw.[2]

In such a suffocating atmosphere of political correctness and distorted facts, it is not surprising that Omar Khadr sued the Canadian government and obtained what he wanted. 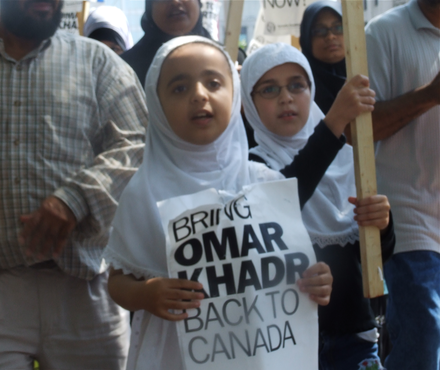 Demonstrators demanding the repatriation of Khadr to Canada. (source: Wikipedia)

That Khadr is a Canadian citizen is itself preposterous. He was born in Canada in 1986 to Palestinian and Egyptian immigrant parents. He then spent his childhood travelling between Canada and Pakistan. His mother wanted to raise her six children away from Canada, as she disliked its “Western social influences.”[3] In 1992, Khadr’s father was injured in Pakistan and the family returned to Canada, obviously to take advantage of Canada’s generous public healthcare system. The family then returned to Pakistan, where a few years later his father was arrested and accused of funding the Egyptian Islamic Jihad. He was later released. The family then moved to Afghanistan in 1996, which eerily corresponds to the Taliban’s takeover of the country.

This parasitic use of the Canadian passport to secure healthcare benefits and court settlements is scandalous, but all too common. However, the people generally keep a firmer grip on their common sense than the elites running the institutions. This exorbitant settlement shocked many and a recent poll shows that more than 70% of Canadians believe the government made the wrong decision in awarding Khadr such a large sum. Recently questioned about this, Prime Minister Justin Trudeau arrogantly replied that

Adding that “‘we all end up paying’ when governments fail to respect the rights of its people.”[5] 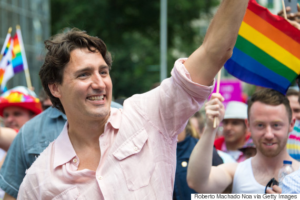 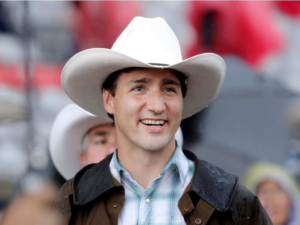 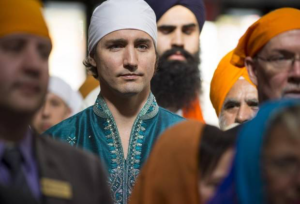 This is not the first time thatCanadian taxpayers have had to pay exorbitant sums to a Muslim allegedly mistreated by foreign governments. The most high-profile case before was that of Maher Arar, a dual Syrian/Canadian citizen who was arrested by U.S. authorities at JFK airport following the September 11th attack and deported to Syria, where he apparently underwent abuse at the hands of Syrian authorities. Arar was later completely cleared. Backed by the full Canadian media, and the same crowd of activist lawyers and biased courts, he was awarded over 10 million dollars back in 2006. The responsibility of the Canadian government (and taxpayers) is just as mysterious. But who cares when the institutions must endear themselves to fashionable minorities backed by lobbies of disproportionate influence, even if at the expense of the muzzled white taxpayer? After all, it’s nobody’s money.

Such antics only result in the people gradually losing trust in the institutions that are supposed to represent them. This is the good part of the story.

William Davis is a freelance writer.

[4]
Quoted from The Guardian, “Trudeau argues Omar Khadr settlement was right thing to do amid backlash”, 13 July, 2017