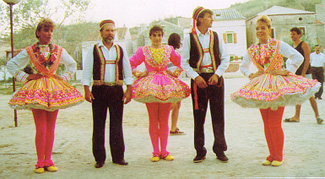 Men and women in traditional folk costumes from the island of Susak, Croatia. Susak is one of the smallest islands in Europe, having the most endogenous population in Europe. Most of Susak’s descendants live in New Jersey, USA.

What follows are more translated excerpts on race, taken from rare and difficult-to access books written by prominent National Socialist legal scholars, with the focus on “acquired traits” vs “inborn traits” and how they interacted in the proposed NS racial legislations. This explosive topic, particularly in modern and highly multiracial USA and the EU has been covered recently in more details by prominent sociobiologists, aka “race scholars,” Richard Lynn, J. Philippe  Rushton, Arthur Jensen, Kevin MacDonald and others. The main intent of this essay, however, is not to glorify National-Socialism or absolve it from some of its crimes, but to indirectly point out that in the so-called free liberal democracy there are subjects that are carefully being avoided by humanities professors and studiously shunned by politicians of all colors. As long as historical truth, particularly in the analyses of various World War II vicitmhoods, is being defined by state attorneys and judges and not by social scientists and historians, and as long as the discussion about race is being left over to rabble-rousing ideologues and college agitators, the much vaunted free speech in the West will remain an empty buzzword.

According to these examples there can hardly be any doubt that man’s hereditary endowment, having been examined in diverse areas of human genetic predispositions, has been subject to well-established regulations for the rest of living nature. These findings, however, have a far-reaching and decisive significance for the assessment of the doctrine that all men are equal. This doctrine is known to be one of the main pillars of the teaching structure of Marxism. The adherents of Marxism have found in the dogma of equality of all people the justification for their internationalist attitude. In fact, if all people are indeed equal, one must logically come to the conclusion that the segregation of peoples and nations against each other is a condition defying any inner justification, and therefore needs to be dismissed. Thus, Marxists of all colors cling to the hopeless equality dogma as their last straw of hope. Certainly, they cannot seriously dismiss the overwhelming abundance of the already examined Mendel’s case studies on the effectiveness of the laws of inheritance. But they (Marxists) know how to help themselves by providing themselves with another dogma: namely, that in human heredity there could be other rules designated for humans, which may also come into play.   Dr. Gustav Franke, Vererbung und Rasse: eine Einführung in Vererbungslehre, Rassenhygiene und Rassenkunde (München: Deutscher Volksverlag, 1938, 1943), (Heredity and Race; An Introduction to Heredity Teaching, Racial Hygiene and Race Studies), p. 97.

The presumption about the heritability of acquired traits is a prerequisite for the dogma of equality of all people. This dogma, however, is the main pillar of Marxist teaching. However, if equality of all people is laid out as an internationalist worldview, then the tearing down of all barriers set up by national awareness (“Volkstum,”n.b.) and race, becomes feasible. Hence, Marxism was compelled to adopt, without any reservation, the excesses of environmental theories in order to certify that all visible inequalities among mankind could be traced back to environment factors, that is, to defects, damages and shortcomings of the “society.”  In addition, Marxism was, therefore, obliged to search for rescue in Lamarckism, whose presumption of the heritability of acquired traits was considered to be, from the biological point of view, a scientific foundation. For Marxism, the doctrine of the heritability of acquired traits is a question of life and death. This is what the Soviet rulers recognized with all seriousness. Therefore, in Russia, the denial of acquired hereditary traits is punished with death, or at least with a long-term exile. (Ibid. p 113).

As [Fritz[ Lenz, one of the most important racial hygienists aptly describes, Soviet leaders cling to the doctrine of  the heritability of acquired traits for yet another specific reason. They need this doctrine in order to calm their conscience.  Because,  if everything boils down to environmental influences, the Bolshevik slaughter of so many carriers of valuable hereditary traits does not signify an irreplaceable loss, but rather an environment regulated by the state, requiring particularly high expenditures for teaching and education that would generate sufficiently valuable progeny among lower classes. What a pious thought, indeed! (Ibid, p. 114).

Also interesting are Lenz’s earlier remarks that the proponents of the doctrine of the heritability of acquired traits are for the most part Jews. The inclination of Jews to Lamarckism, writes Lenz, is evidently borne out by the desire that there should be no irreconcilable racial differences. And further he says: “if there was a heritability of acquired traits, Jews could then, in their lifetime in the Germanic environment and their appropriation of the Germanic culture, become real Germans.” Such thoughts may be proper to some Jews. Yet, here we must face the facts: The Jew remains the Jew, even if his ancestors had lived among Germans for one thousand years (Ibid., p. 114).

There are not just racially purebred people, just as there are no racially pure nations. Should this be the case, one would have had to skip much earlier over the fact of race differences, as well as over different race legislation. Most people today are half-breeds (“Mischlinge” in the text, n.b. ), most nations are made up of mixed people. The mischling differs from a racially pure man by his emotionally-split world (“Two souls, alas, are dwelling in my breast.“ cf. J.W. Goethe, Faust; lines: 1112–1117). This means that his emotional life is not unequivocal, harmonious, or pure.  A racially pure man makes decisions in an uncontrived, firm, and instinctively righteous manner.  The mischling must always choose between the two opposing possibilities. He lacks a secure feeling, a clear self-conscience. He does not sense what is good and bad; he must evaluate it first.

Such a mischling is primarily a Jew. According to [Hans] Günther, the essence of Judaism can only be comprehended from its manifold racial crossbreeding. Therefore, the Jew clings to external commandments, to the law, to the dogma, and to the letter of the law. He does not have the feeling for what is right and what is appropriate; he must first explore it through reason. It must be told him first from without. That is why the Jewish man must provide himself with legislative machinery (“Gesetzgebungsmaschine“, N.b.), telling him what is forbidden and what is allowed respectively. He sees in the state, or in some other external organization, the source of law. That is why he worships the power that enacts laws and conceives of justice as the external fulfillment of these commandments (Ibid. p.29).

We come across the view among all racially crossbred peoples that the law must  be “set “ from  “above” or  from the “outside,” by the state, or  by some  power. This was the case in the last days of Hellas [ancient Greece], in the late Roman Empire, and this is also the course of recent developments that have come to us. The more crossbred a people is, the more jewified ( “verjudet” in the text, n.b.), it is, the more salvation it expects from “good laws” which should hold together scattered, mongrelized, low-spirited masses  with their manifold and insensitive desires. The written law, i.e. the “positive” law, appears then as the alpha and omega of all wisdom. “Positivism” must carry the upper hand, and in its wake it alters the scholastic proceedings of the law, that is, the complete renunciation on the righteousness of a specific legal provision, turning thus the judge into the slave of legal clauses. The independent-minded person is being henceforth shoved aside and in his stead enters the paragraph-seeker, who believes that justice could be served by correctly interpreting the letter of the law (Ibid., p.29). Dr. Helmut Nicolai, District President of the Government in Magdeburg (Die rassengesetzliche Rechtslehre (Racial Jurisprudence), (München: Herausg. G. Feder; Verlag Frz. Eher Nachf. Gmbh, 1933).

Sunic’s latest book, Titans are in Town (Arktos, 2017), prefaced by Kevin MacDonald, consists of a separate novella and essays on ancient myths.