Most Americans suspect that Blacks commit the majority of crime in this country. They are, in a word, correct. However, the government takes great strides to cover this up. From the federal on down to the city level, our rulers are loathe to release data on crime that includes racial breakdowns. Such data disrupts the preferred narratives about race in this country.

However, there are a handful of cities that do let the public see the numbers, and, no matter the city, it is Blacks who are running riot. Philadelphia is one those few forthright cities, so we will start there. To begin, here are the demographics for the city in 2016, according to the US Census:
44.2% Black
34.9% White
14.4% Hispanic
7.4% Asian
2.6% mixed
0.9% American Indian
0.2% Hawaiian/Pacific Islander

Here is the demographic makeup of arrestees for shootings, both fatal and non-fatal, that same year in Philadelphia: 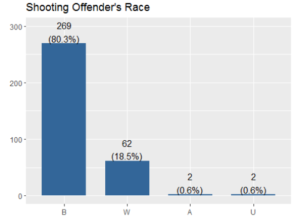 Here are the same shooting arrests broken up between the uniquely clumsy categories “Latino” and “non-Latino.” 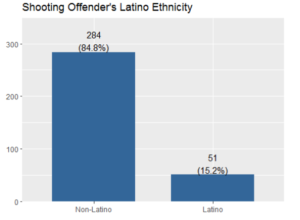 Hispanics/Latinos are quite close to being exactly proportional. They were 14.4% of the population at large, and 15.2% of arrests for shootings.

The same pattern holds over the last 10 years of data that I looked at.

Conclusion: Blacks commit the overwhelming number of murders, with their arrest numbers being nearly double their share of the population.

Whites commit murder at about half the rate their share of the population would suggest.

Asians commit an infinitesimally small amount of murder relative to their population size.

Making things more interesting is that the data most likely to be in error are the numbers for Whites. All Hispanics must be categorized as a race in addition to being in the “Hispanic or not” binary. So every Hispanic in the numbers above is also represented in the one of the races as well. Each one is counted twice, once as Hispanic, and once as one of the racial categories. This is why the total percentages for each year add up to more than 100; and the amount over 100 each year is the percentage of Hispanics arrested that same year. And generally speaking, Hispanics are categorized as White by default.

That is to say: if instead of having a Hispanic and “non-Hispanic” binary on top of the racial categories, there was the appropriate racial category for them — such as mestizo — the number of White arrestees would plummet. Even if each group of Hispanics was (and this is generous) one tenth genetically European (e.g. Argentines), and one tenth genetically sub-Saharan African (e.g. Dominicans), the White share of offenders still plummets.

Say of the 20 Hispanic arrestees, two were White, two were Black, and the other 16 were mestizos. This would mean that of the 41 “Whites” arrested for murder that year, only 25 were “White” in the way the word is meant in any other context. That would mean Whites were only 9.3% of murderers that year, not 15.4%.

You can go through each year yourself and do the same calculation.

The take-home message is that Whites in Philadelphia are less than a third of the murders you would assume given their share of the population. Furthermore, Whites are committing only about two thirds of the murders that official numbers would have you think. Note too that these revised numbers are assuming that as much as twenty percent of Hispanics are White and another twenty is Black. If you think those estimates are too high, than the White murder rate is even lower, and the mestizo rate higher.

This trend holds up for every year that numbers are available. Here are the official 2010 numbers again:

Of the 21 Hispanics, let us assume that roughly one fifth is Black: four; one fifth is White: four; and the rest are mestizos: 17. Assuming that two were categorized as “Black,” and the rest as White, that leaves 19 as White in the above numbers, of which only two are. So subtracting 17 from the White total and you get:

These numbers show Whites are less than half the number of murderers the official numbers suggest they are.

To be sure, it will be easy for any reader to nitpick what the most likely racial breakdown is of the Hispanic category. My “for-the-sake-of-argument” estimates of every group of Hispanic arrestees being 60% Mestizo, 20% White, and 20% Black were chosen to be generous to liberals reading this. The breakdown is much more likely to be along the lines of 80% mestizo, 10% White, and 10% Black—or even 90% mestizo, 5% White, and 5% Black. It would largely depend upon where you drew the line for mixed race Latin Americans. For example: should castizos, normally defined as being around 75% White and 25% Amerindian, be considered mestizos or White?

Black murder and violence is a constant in this American life. Gilbert Cavanaugh has shown that it is true in Minneapolis. Over a year ago, in the monograph The Color of Crime, American Renaissance noted it was true in New York and Chicago. And it is true in St. Louis as well — another city surprisingly willing to give citizens the racial numbers on crime. St. Louis is worth looking at closely because the Hispanic share of its population is very small. Not only does this make their arrest data more accurate, but the crime data does much to further confirm that the White crime rate in cities with large Hispanic populations is being grossly overestimated because of the ridiculous practice of categorizing almost all Hispanics as White.

Again, the same pattern can be seen for all the years I examined, going back to 2006. Obama being president was obviously not a panacea for Black criminality.

Why? Could it be that Whites in Philadelphia are at least twice as violent as the Whites in St. Louis?

It seems much more likely that most Hispanic murderers in Philadelphia (and elsewhere in America) are being inaccurately labeled as White. Global numbers on murder rates further suggest this. Mexico and Central America both have some of the highest murder rates in the world. And even the American territories in the Caribbean: the Virgin Islands and Puerto Rico, both have murder rates at least three times higher than the US. Why would the Hispanic propensity for murder plummet just because of a change in geography?

Not only are Black crime rates incredibly high, but even the low crime rates of Whites are extremely inflated by the obviously inaccurate inclusion of Hispanics in their arrest numbers.

I challenge anyone reading this to find an American city with a sizeable Black population that does not have the same trend as the cities above. Blacks are simply prone to murder, and violence generally. This piece focuses on murder for the sake of simplicity and clarity, but the trends don’t suddenly change when you look at aggravated assault or rape — especially not rape.

Both liberals and cuckservatives are likely to note that White “racists” such as myself should shut up about this because the vast majority of the victims of these Black murderers are Black themselves. As such, violent crime should not be too big a concern to identitarians.

While it is true that whenever data on interracial crime is made available, it invariably shows that the lion’s share of crime committed by any race is against members of its own race, this misses a key dynamic of American society: the constant tug-of-war between the forces of integration and segregation.

The government is constantly trying to integrate the races. Meanwhile Whites, whether or not they make it explicit, are forever trying to avoid non-Whites, especially Blacks. The government forces integration through busing, Section 8 housing in White suburbs, affirmative action, quotas, amnesty, and “refugee” resettlement. Whites in turn fight back by sending their children to private schools, moving to the suburbs, fleeing integrating neighborhoods, tolerating astronomically high rents, supporting the right to conceal and carry firearms, and upholding “stand your ground” and other generous self-defense laws. This is the simplest reason why the majority of Whites vote Republican. On all the issues that serve as proxies for dealing with and avoiding racial integration, Republicans help instead of hinder. While the GOP is far from being explicitly identitarian, the sudden arrival of Section 8 housing, or the ability to obtain a voucher so you can send your daughter to Catholic school can make or break an idyllic childhood.

Despite the goliath efforts of our the federal imperium, America is a very racially segregated society. No one contests this fact, not even leftists. Even cities that on paper appear to be a mishmash of races are in actuality collections of extremely monoracial neighborhoods. This is all in the face of mass government opposition, yet it persists. And the facets of American life with the least racial integration are the ones with the least government intervention, such as churches, which are often called the most segregated facet of American life. They could also be called the most government-free fact of American life. This is not a coincidence.

And who could blame us?