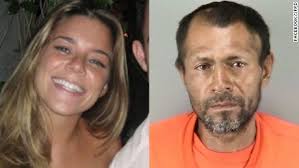 On July 1st, 2015, 32 year old Kathryn Steinle was shot and killed walking on Pier 14 in the Embarcadero district of San Francisco. Her killer was a convicted criminal and a five-time deported illegal alien from Mexico, Jose Zarate. Zarate first claimed that he had fired at a sea lion but later changed his story and said that the gun had gone off when he picked it up after finding it wrapped in a cloth beneath a bench on which he was sitting at the time. The shot ricocheted off a piece of concrete and struck Steinle in the back; she died two hours later of her injuries.

The case was a sensation containing as it did all the necessary factors: a criminal and many-times deported “illegal alien,” a young and innocent victim and, of great interest in these days of demands for gun control, a mysterious hand gun. Further, this “gun crime” was committed in a state and city with very strict—some say unconstitutionally so—gun laws. Zarate was tried for second degree murder, considered an “overreach” by the San Francisco prosecutor given the ricochet nature of the wound! He was found not guilty. Since the trial, the Federal Government has sought custody of Zarate to prosecute him on any number of secondary crimes, but as a “city,” San Francisco is decidedly unwilling to cooperate with the Department of Justice. It is said, however, that prosecution for violations of the city’s and state’s gun laws is in the works. But whether or not Zarate ever pays for his crimes—and they are many—nothing will restore life to Kathryn Steinle.

As a final “icing” on this wretched cake, California and the City by the Bay have proven more hostile to President Donald Trump’s condemnation of the crime and the criminal than they ever were against Zarate, especially given his numerous convictions and insistence on returning to the United States to commit further mayhem. After the murder and while much of the country was mourning Steinle’s death as an unnecessary tragedy, California ensured that there will be more such incidents by doubling down on its madness by becoming a sanctuary state.

What the eventual outcome of the matter will be is unknown because Zarate is now in federal custody awaiting charges. But as long as large cities and even a very large state are determined that the laws of the rest of the country do not apply to them, we may consider Kate Steinle the first of many casualties resulting from the insanity that grips this country. While in Chicago, legal citizens—doubtless with illegal guns—kill more people in a year than are killed in many small wars, our broken immigration system simply opens the floodgates for more killings while “law enforcement” and local and state governments protect and serve not their citizens, but the criminals involved for the simple reason that they represent first, liberal ideology and second, the next wave of liberal Democrat voters.

Still, it is interesting to note the gun laws in California in general and San Francisco in particular. After all, we know any time a gun is used in a crime, liberals en masse begin their siren call for “gun control.” All intelligent and rational arguments regarding the facts that such laws only affect lawful citizens and that criminals are seldom daunted by the law mean nothing to our liberal friends. However, in the case of Zarate, it would seem that not only did the law mean nothing to this repeat offender, but it meant nothing to California or San Francisco! How else can anyone explain why this “gun crime” — officially so terrible in the eyes of the minions of California government — seemed of such little concern? The gun laws of California are among the most restrictive in the nation and include a five-year Firearm Safety Certificate requiring a $25 fee and the applicant having to pass a written test proctored by a Certified Instructor from the Department of Justice. And the list of regulations only gets worse. The City of San Francisco adds their own laws on top of California’s cumbersome gun regulations.

Consider all of this legal falderal in light of the unattended, unlicensed and fully loaded gun that Zarate claims he found under a bench! Not only does he take possession of that gun—illegally!—but proceeds to discharge it in public whether it be to shoot a sea lion or a woman. You would think that the prosecution would have added these very serious gun charges when he was tried for the murder of Steinle, but he was only convicted of being a felon in possession of a firearm, and the sentence for that violation was reduced to time served. I suppose we should be happy that the judge rejected the absurd defense argument “that he didn’t know he was holding a gun when it fired.”

There can be only one reason why Zarate’s crimes—ranging from his drug convictions and his numerous illegal entries coupled with the death, however unintentional, of Kathryn Steinle—are viewed seemingly very differently than would have been the case had they been committed by an American citizen; that is, the fact that Zarate is not a citizen of the United States, but a protected, cossetted and welcomed illegal (non-White) alien. Instead of his crimes making the killing of Kate Steinle of greater consequence, his status has virtually nullified her death, at least as far as the California legal system is concerned.

Jefferson once wrote, “The care of human life and happiness and not their destruction is the first and only legitimate object of good government.” Jefferson was, of course, speaking of the citizens of that government. It would seem that the State of California and the City of San Francisco have turned that truism on its head, bestowing care and happiness not on one of their citizens, but on a man who has proven unworthy of that protection. Sadly, there seems no end in sight of this particular governmental perversion.