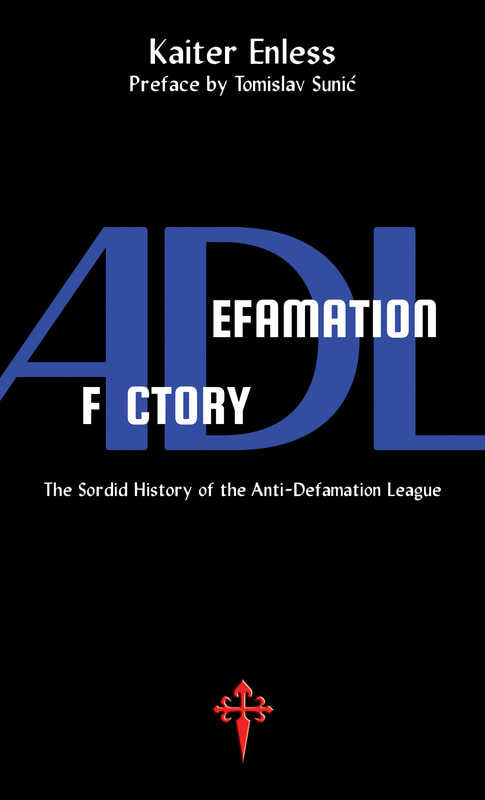 Below is my preface to the book.

There is such a huge literature on Jews that it makes one wonder whether it is necessary at all to add more books on this subject. For the most part, the literature on Jews, at least as far as our postmodern discourse is concerned, depicts them as eternal victims of irrational prejudice by non-Jews. Hence, Jewish victimhood—either real or surreal—must now be projected worldwide as an educational tool for preordaining Jews as moral pillars of all of humanity. In addition, these perpetual victims must be appointed to serve as the conscience of always aggressive and unpredictable Gentiles. Even the literature critical or hostile to Jews, which as a rule carries the label, “anti-Semitic,” plays an important role in bolstering Jewish identity. Were there no more anti-Semites around, it is questionable how much longer Jewish identity would survive. Likewise, if all present anti-Semites were to disappear for good, a new brand of anti-Semitism would likely need to be invented.

In Defamation Factory, Keiter Enless focuses on the power and tactics of the Anti-Defamation League ( ADL), but also discusses Jewish psychology. He explains a specific Jewish binary behavior: constant fear of sudden anti-Jewish outbursts on the one hand, and, on the other, the obsessive Jewish quest to suppress their critics, whom they label “anti-Semites.” One merit of this book is that its author delves into semantic distortions used in the ADL discourse on potential or purported critics of Jews. While it is today acceptable to talk in general about “German crime,”  or “Russian crime,”  or “American  crime”  without criminalizing the entire German, Russian or American nation, the same generic usage of the word “Jew”, let alone the verbal construct  “Jewish crime,” is unacceptable and even, as is the case in modern Europe today, subject to criminal sanctions. The substantive “Jew,” even when used in a neutral political context, must be avoided. It should not come as a surprise that even the short, high-pitched English phoneme “Jew” /dʒuː/ is getting more and more replaced by a somewhat attenuated low-pitched adjective consisting of the two English syllables “Jew-ish,” thought to be able to offer some safe haven to a writer venturing into critical comments on some aspects of Jewish behavior — albeit always on guard not to cross the line, lest they get branded an “anti-Semite.”

Similar recourse to the adjectivization of the noun “Jew” is taking place in French and German speaking media and scholarship.Merely mentioning the German barrel-sounding and prolonged two-syllable noun “Jude” ( “yoo-deh”) — no matter what the context — or the shrill French one-syllable noun  “juif” /ʒɥif/, even if no Jew-bashing is intended, sounds disturbing in the ears of Jews. The intention is clearly to inhibit discussion of Jews at all, whether legitimate investigations of Jewish power and influence or the ravings of mentally deranged anti-Semites.

Keeping this in mind, it comes as no surprise that ever since its founding, the ADL has maintained a keen interest in having the last word in shaping public discourse—first in America, later in Europe. Having realized the power of words the early founding fathers of the Anti-Defamation League, decided to adorn themselves with this nice, abstract, flowery, and lachrymose title, thus providing a veneer of impartiality for public consumption. It avoided labeling itself with  an earsplitting qualifier like “Jew” or  “Jewish.” The hypothetical, albeit more appropriate denomination i.e., “the Jewish  Anti-Defamation League”, would barely have the same resonance of impartially for Americans today. For readers who grew up in the former communist universe, the awesome similarities  between the former communist newspeak in Eastern Europe and the present ADL newspeak in America cannot be overlooked.

Enless’s book offers a handy overview of ADL activities over the last century in America. This semi-secretive organization has managed, under cover of a humanitarian jargon and tolerance preaching, to cover up its own, often murky and criminal affairs. Enless’ book reads like a police report on a guilty suspect, yet the suspect never ever considers entering a guilty plea. Instead, the suspect deftly reroutes criminal charges against him by declaring himself a victim of hate. Thus, Leo Frank’s murder of  Mary Phagan in Atlanta in 1913 and his subsequent lynching by an angry mob came served as an excellent test case that legitimized the future activities of the ADL.

Today, we take for granted the usage of the expression “hate speech,” as if this expression had been embedded in English and American literary and juridical baggage ever since the birth of the English language or the birth of Geoffrey Chaucer. It is often forgotten that this equally abstract, generic expression is of recent provenance, practically unknown in the modern English language until the end of the 1970s. Nowadays, this newspeak expression “hate speech”  is being mightily championed by the ADL and similar institutions promoting peace and racial tolerance. The expression “fighting against hate” has become a major battle cry of the ADL, also entering into the daily parlance of modern citizens and their politicians who seldom bother to examine the origin of this expression or the motives of its inventors. The author notes that  “a world without hate…is  after all, a phrase which the ADL liked so much that they had it trademarked.”

The book also sheds light on the verbal inversions carried out by the ADL and its non-Jewish minions and how their linguistic manipulations result in the inversion of political reality. Or to put it more academically, verbal inversion always leads to the reversal of a  thesis. This is particularly true in the modern Western judiciary and scholarship which are becoming more and more inclined to arbitrary decision making, always ready to  clamp down on free speech advocates by declaring every nonconformist thought offensive or criminal. For instance, Henry Ford, the famous American car maker, who is also mentioned in the book, along with thousands of unnamed American activists, was also the subject of such thesis reversal. The ADL had initiated a smear campaign against Ford after Ford himself had first drawn attention to legal improprieties of the ADL.

The last chapter of the book leaves the reader holding his breath. The new viral world of the internet opens up new avenues of dissent for free speech advocates. It’s no surprise that the ADL is doing all it can to silence intellectual dissent in this new medium.