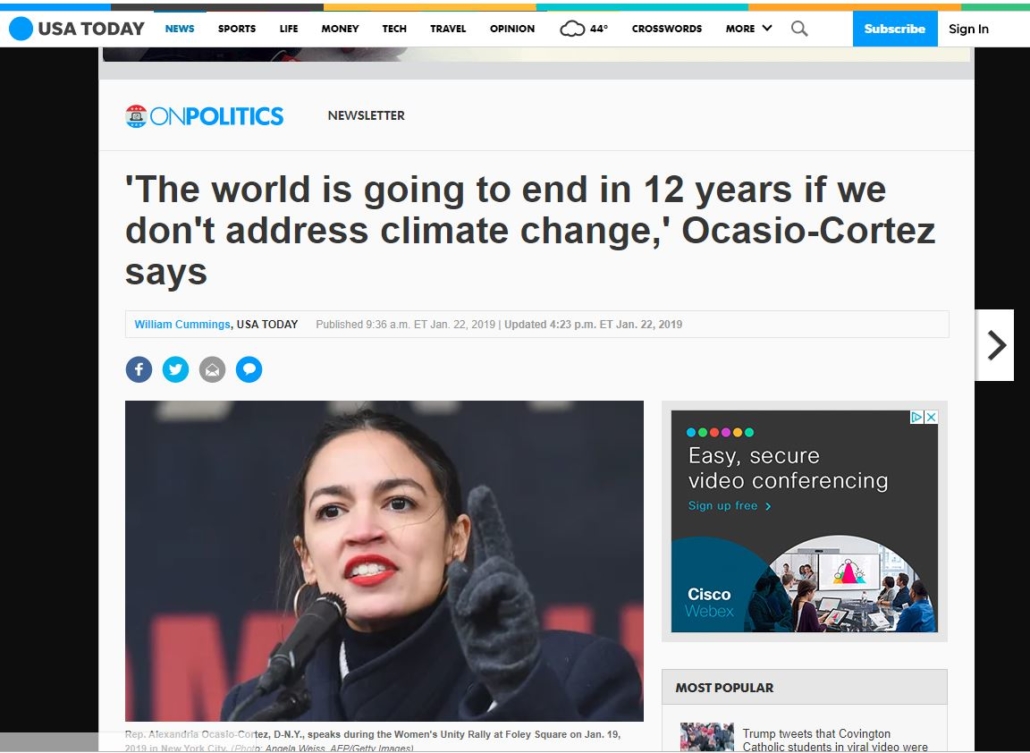 Scientists have known for some time that their predictive models of global warming were at increasing odds with the data. More recently, they have begun to pinpoint some of the faulty assumptions in the models used to make projections (not observations) of global warming. One example of this type of correction is a 2018 article published in the prestigious journal, Science.

Nitrogen availability is a central controller of terrestrial plant growth and, thereby, of the carbon cycle and global climate change. It has been widely assumed that the atmosphere is the main source of terrestrial nitrogen input. Surprisingly, Houlton et al. now show that bedrock is just as large a nitrogen source across major sectors of the global terrestrial environment.

Climate scientists have long known that plants offset some of the effects of climate change by absorbing and storing CO2. But they assumed that the ability to plants to perform this function was limited because the availability of nitrogen in the atmosphere was limited. As an earlier 2003 study published in Science stated, “there will not be enough nitrogen available to sustain the high carbon uptake scenarios.”

But this idea that the only source of nitrogen for plant life came from the air has been refuted in a more recent article, also in Science. Now we know that there are vast storehouses of nitrogen in the planet’s bedrock that plants can also feed on. In light of these findings, Ronald Amundson, a soil biogeochemist at the University of California at Berkeley, told Chemical and Engineering News that “If there is more nitrogen there than expected, then the constraints on plant growth in a high-CO2 world may not be as great as we think.”

With more nitrogen available, plant life might be able to absorb more CO2 than climate scientists have been estimating. This  “has the potential to change all projections related to climate change,” because there could be more carbon storage on land and less in the atmosphere than the models assume.

For interested readers, a series of articles on this topic reveal other evidence of weaknesses in climate models used to predict future warming. These models failed to predict a decade-long pause in global temperatures. Nor have various calamities that were supposed to have occurred by now materialized. And a recent paper published in another prestigious scientific journal, Nature, has also concluded that the planet is less sensitive to increases in CO2 than the computer models assume.

Of course the sky is falling, but maybe not as fast as is being predicted by the left-wing media. Beware of self-serving socialist projections based on outdated computer models, or sometimes just nothing at all. The notorious AOC and her ilk can get away with unprecedented levels of ignorance given the current state of American journalism as long as the errors are in the left direction. But any curious citizen can look back at what previous “experts” claimed was supposed to happen over the past half century and confirm just how erroneous and exaggerated their claims have been all along.

Over thirteen years ago, Al Gore declared the earth to be in a “true planetary emergency” with only a decade left to save the planet from global warming. The former vice president said, that “unless drastic measures to reduce greenhouse gases are taken within the next 10 years, the world will reach a point of no return.”

Gore’s movie, Inconvenient Truth, was found by a British judge to contain nine errors. The judge said it could not be shown to students unless it included a notice pointing out the errors. Here are nine of Al Gore’s guilt/fear producing predictions that never materialized.

Gore’s point of “no return” was back in 2016. Of course, his movie won an Oscar, and the hero of Hollywood was fast-tracked to becoming the first “carbon billionaire.” In just 7 years between 2000 and 2007, Gore’s assets soared 50-fold from an estimated $780,000–$1.9 million to “well in excess” of $100 million. Besides his hit movie, Gore used his climate panic lobbying to sway the government to invest in the economic sectors he was poised and ready to profit from. By 2008, Gore put $300 million into a campaign to promote climate fears while offering carbon reduction solutions that benefited the firms he was invested in. When the sympathetic Obama Administration introduced a “renewable energy” solution for the economy, fourteen of the tech firms Gore was invested in had received and/or benefited from over $2.5 billion in loans, grants, and tax breaks.

Democrats count on the public to forget each dire warning that they issue about the end of the world in ten years. Then ten years later they make the same predictions. And the shocking thing is that somehow the public does forget, or at least the Democrats do. As each new generation of American schoolchildren are indoctrinated to believe this doomsday prediction, they march to protest “climate inaction” and set out to save the planet.

The inconvenient truth for Gore, Obama, and the current crop of Democrat hopefuls is that there is no planetary emergency. Not one of their dire predictions has come to pass. Why do they and their multitude of followers continue to believe their doomsday prophecies in the face of 50 years of disconfirmation? It turns out that psychologists have a compelling explanation.

In the 1950s, psychologist Leon Festinger became intrigued with a news story about a doomsday cult led by Dorothy Martin, a suburban housewife who claimed she’d received messages about the impending flooding of the Earth. Festinger was already developing his theory of cognitive dissonance and recognized the situation as a unique laboratory to study what would happen when a deeply-held belief was disconfirmed. He saw this as a case that would lead to the arousal of dissonance when the prophecy inevitably failed. He thought that altering or denying the original belief would be very difficult, as Martin and her group were fiercely committed to it. For an excellent application of cognitive dissonance theory to the liberal mind, see here.

Thus began a unique observational study of this small apocalyptic cult that laid the foundation for one of the most influential psychological theories in the history of the field. Martin claimed to have received messages from “the Guardians,” a group of superior beings from another planet, who said a flood would destroy the world on December 21, 1954. Three psychologists and several more assistants joined the cult and observed proceedings firsthand for months before and after the predicted apocalypse. Many of the group members quit their jobs and disposed of their possessions in preparation for the apocalypse. When doomsday came and went, Martin claimed that the world had been spared because of the “force of good and light” that the group members had spread throughout the world. Rather than abandoning their discredited beliefs, group members adhered to them even more strongly and began proselytizing with fervor.

Festinger had predicted exactly this reaction. He argued that proselytizing provided a way for them to gain more social support and thus lessen the dissonance of disconfirmation. As Festinger wrote, “If more and more people can be persuaded that the system of belief is correct, then clearly it must after all be correct.” As he wrote in his classic book about the case, When Prophecy Fails, the group’s belief system did not just remain intact, it became even stronger.

This has close parallels with today’s climate alarmists who have been forecasting the end of the world as we know it in ten years and renewing that prophecy with more fervor with each passing decade since 1970. The pervasive cultural and institutional power held by the Democrat media (film, the talk show universe (whether morning, noon or late-night), TV news broadcasts, major newspapers and magazines, etc.) represent a particularly powerful form of social support. After all, if you are in a position of tremendous institutional or political power, then not only are you hugely confirmed by the colleagues who share your beliefs, but questioning them would threaten everything you hold dear: job, reputation, future career and social standing. Festinger paid special attention to this role the society plays in keeping dissonance at bay: “The more people who hold a belief in common with you, the greater the amount of consonance that is built up and the less dissonance that is encountered when there is a disagreement.”

The doomsday paradigm initiated by true believers on Earth Day in 1970 and echoed by multiple generations of Democrat leaders from Gore to Obama to the current “Green New Deal” continues to develop widening cracks as the ratrio of contradiction to reality increases. The cognitive dissonance caused by being on such intellectually shaky ground insures that this doomsday belief system will remain intact for the foreseeable future, producing more denial and dysfunctional thinking, more hysterical calls and campaigns for the moral exclusion of “climate deniers”, and more desperate measures against them.