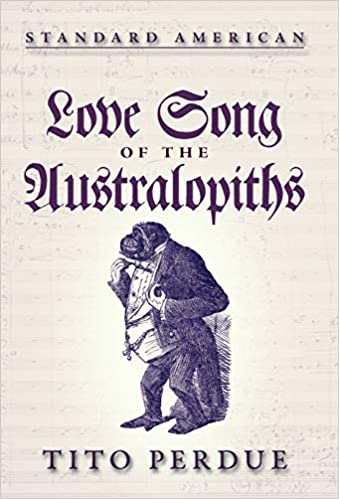 No one knows the true intent of the nameless character in Love Song of the Australopiths who is about to turn in his latest anti-Semitic report to his elderly associates. His accent and his phenotype, however, point to Lee Pefley, the eternal Southerner, using different aliases in order to better terminate his life in a suicidal killing spree. The plot of the book revolves around his similarly gloomy lookalikes Greta, Fred, Frank, Taw et al., all of whom defy positive identification and all of whom are living outside what we think of as normal time sequences.  Tito Perdue, in this latest installment of his doomsday scenarios, plants his atemporal Robert E. Lee lookalike back to square one. Times Square? Thirty years earlier, Lee-Lookalike had managed to make his escape from New York and managed to return to home sweet home Alabama. Now, however, as expected in his beliefs of eternal return, he is being thrown anew into the Manhattan manhunt, ready for a final showdown with the forces of Brownness and darkness.   Prior to his return, Lee had nurtured dreams about the revival of the South, only to realize that the New York cesspool had already infected the South. Now back in New York, the rules of the survival game have changed dramatically over the last 30 years. Unlike in his previous sojourns in the Big Apple, he must resort to different combat procedures. Alas, times have changed and his rebel nature obliges him to live not in a 50- or 60-year-old body, but instead lug around the body of a man approaching the age of 80 something.

During his return, New York, or what remains of it, is hit by floods and with winds blowing over 300 miles an hour.  The City fauna teems with defecating colored bipeds, overweight mischlings, and the surplus of waste from the antipodes.  Scavenging, dying and killing of sorts have become the only sport in town.  The lookalike Lee returnee meets with pockets of his confederates at closed-off locations — most of them being his former fellow travelers, quite a few his ex-beneficiaries, and some hopeless would-be right-wing literati, all hoping to jump-start the combination of Fortuna and Fatum in a desperate effort to alter the course of history.  The disconnected plots in the novel occur mostly in Manhattan, oftentimes in old run-down apartments located on upper floors along 54th Street.

In the first half of the book the ageing Lee-Lookalike reminisces about his past travelogues which would later turn into geriatric monologues. He meets with a few equally-decrepit ex-Codreanu devotees from Eastern Europe and crosses paths with a few wannabe progeny of ex-Soviet-Gulag escapees who fantasize about launching a proactive Antisemitic Combat League. His first, second and third ex are also somewhere around, but can rarely be spotted, except when auscultated on his voicemail. The biggest plight for Lee-Lookalike, however, is holding in check his incontinence which pesters him all along the way, especially when climbing up the stairs to the second or third floor of his alternate residence. Hence the reason his mind is primarily focused on a search for a solid toilet bowl somewhere in the neighborhood.

Like most of his earlier novels Perdue’s Love Song of the Australopiths is an allegorical story requesting from the reader full immersion into his language and good acquaintance with every figure of his speech. The present novel represents what the French call roman à clef, a prose that needs a special master key to decoding the plot.  In which literary genre should one therefore classify Perdue’s latest novel?  One could hastily portray him as a first-class doomsday seer who, similar to Ambrose Bierce, has learned the ropes of post-mortem survival. Oftentimes, though, one cannot help but decipher in the New York Lee-Lookalike marks of author’s own autobiographical self-derision, especially when he listens to his associates’ palavering about how to terminate the Jews. He has learned all the ins and outs of how to use his Austrian Glock and drive his Romanian Dacia clunker, yet he has a hard time learning how to load the Glock properly or put the car into the right gear.

With his knack for morbid humor (the Germans use the word “Galgenhumor”, i.e. “gallows humor”) Perdue’s prose fits best into dark romanticism featured in the early 19th century by the works of E. T. A. Hoffmann and Joseph von Eichendorff and their own encounters with alien doppelgangers. At the end of their tales, their dark doubles turn as a rule against their original heroes, dispatching them either into insane asylums or suicide. Following 1945, hundreds of now memory-holed European poets and novelists chose the latter. Similar doubles are now stalking every step of the New York based Lee-Lookalike, often leading him astray and making him pick false targets.

Tito Perdue, however, is unsurpassable in his unique comprehension of circular flows of time — a trait he inherited from his Greek muses and Roman vestals, and which can best be observed in ancient European myths. Perdue uses similar timeless procedures from the Beyond when depicting Lee Lookalike’s adventures in which the past, present and future are lumped together into one comprehensible whole.

Some of Lee Lookalike’s memorable sentences in regard to the meltdown of the time flow carry the unmistakable whiff of Martin Heidegger’s treatises and Ernst Jünger’s war dairies and will hopefully become the heritage of Western literature:

“Historians come and go, but none has ever yet been able to truly delineate the actual look and feel of any past period.”

“What is time? A transparent material unreliable as smoke.”

Understandably, such a noble, above-the-fray circular and pagan mindset exhibited by Lee-Lookalike bypasses the minds of retarded world-improving politicians and their fake doubles, given that they have always been avid promoters of linear, Bible-inspired times.

The goal of Lookalike-Lee to set up the Anti-Semitic society sounds like an additional oddity considering that critical research of the Jewish question is labeled today as “hate-speech,” whatever this means in the EU or US legal vernacular. No longer is anti-Semitism treated as a subject of academic opinion; instead, it is prosecuted as a felony.  In this respect and in retrospect, France and Germany of the late nineteenth century, with their renowned academic anti-Jewish think tanks, such as Die Deutsche Antisemitische Vereinigung and Ligue antisémitique de France, were far more open to free academic inquiry than the media and academia in America and the EU today. Its founders and promoters, the scholars Heinrich von Treitschke and Édouard Drumont advocated  separation at best, or assimilation at worst, rather than awaiting popular discontent which always  leads to violent pogroms and killing sprees. Modern scholars often hide the unpleasant truth that both Drumont and Treitschke, in their correspo 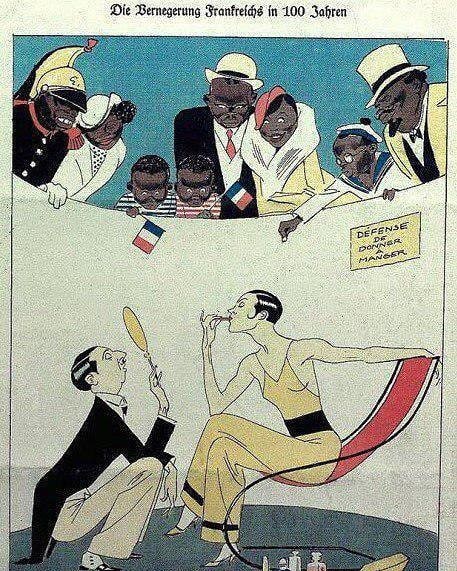 ndence with the Jews, were also the most consistent adversaries of Jew-baiting.

The biggest enigma in the book consists in the author’s choice of the title. Probably the book, instead of carrying the title Love Song, should sport the title Swan Song in view of the fact that Perdue describes the devolution of miscegenated Whites into mixed-race Rehoboth bastards, who a few centuries down the road will rejoin their antediluvian australopithecine cousins in Namibia or in the Great Victoria Desert. If that’s the case, well then, the title does make sense. When reading the  book, a cartoon from the satirical magazine Kladderadatsch, printed in Weimar Germany in 1932, comes to mind, showing wealthy, self-hating, self-isolated and aping Whites who are being looked down upon by the equally aping westernized Blacks. The premonitory caption reads in English translation: “Negrification of France in 100 Years” — the last noncolored French make the biggest attraction in the Paris Zoo.”

The good news is that Perdue’s novel is the first sign of the forthcoming chaos in America and Europe. The preceding century-long aping of the alien-other will surely make many remaining Whites turn suicidal in 2021.