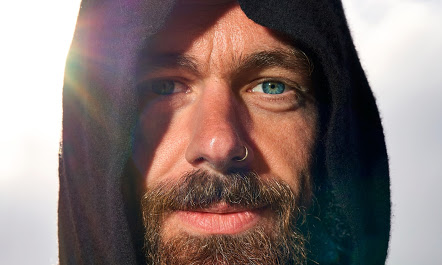 We live in Orwellian times in which “the narrative” is everything, and all facts must be bent, twisted, or omitted to serve it.

This process has greatly accelerated in recent days, following the incident in Washington on January 6th, 2021, which is fast becoming the Reichstag Fire for the Big Tech leftists who are now making a major power grab over Western discourse and society.

Let’s have a closer look at what is being pushed. First of all an incident in which a mob burst into the Capitol Building and did comparatively little damage is being played up as an act of unbelievable horror on a par with 9-11 and Pearl Harbor, even though only 5 people died. Three of those people, by the way, died from heart attacks, one was a police officer who had a stroke hours after he had left the Capitol Building, and one was an unarmed woman who was needlessly gunned down by a jumpy Capitol Building Policeman whose identity is now a well-guarded secret.

If this is an outrage, the main outrage is against the protesters.

But here is Jack Dorsey’s Twitter justifying banning Trump from his 88 million followers:

“After close review of recent Tweets from the @realDonaldTrump account and the context around them we have permanently suspended the account due to the risk of further incitement of violence. In the context of horrific events this week, we made it clear on Wednesday that additional violations of the Twitter Rules would potentially result in this very course of action.”

Yes, the main “horrific event” was a Trump fan getting needlessly shot down and some guy running away with the Speaker’s lectern and smiling. 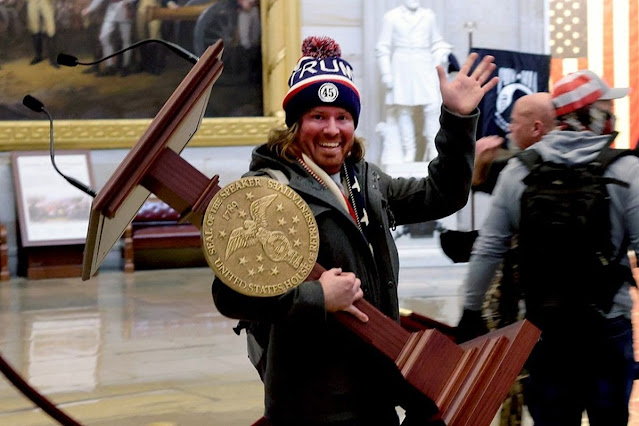 More specifically, Trump’s ban was in direct response to the following two tweets:

“The 75,000,000 great American Patriots who voted for me, AMERICA FIRST, and MAKE AMERICA GREAT AGAIN, will have a GIANT VOICE long into the future. They will not be disrespected or treated unfairly in any way, shape or form!!!”

“To all of those who have asked, I will not be going to the Inauguration on January 20th.”

Yes, practically a Fascist coup d’etat right there!
But also, let’s compare and contrast.
Back in May there was that unfortunate George Floyd business. Everybody’s got a view on that. But, as we later found out, Floyd was a career criminal who died from drugs. Of course, the optics of a policeman kneeling on his back were not good, which is exactly the reason the mainsteam media and social media should have tried to downplay the story. But we knew they wouldn’t, and we also knew where this would go, which it then did.

It didn’t stop them trying

There is a 100% probability that the Democratic Party saw promoting this as something that would be very useful to them in an election year, regardless of who was hurt by all the looting, violence, arson, and spiraling crime rates that would ensue.

The protests are happening in response to the death of George Floyd, who was killed Monday night after an incident that involved Minneapolis Police officers. All four officers involved in the arrest were fired on Tuesday.

Protesters were seen on Chopper 5 footage throwing bottles and rocks at law enforcement, while officers responded with rubber bullets, flash bombs and tear gas to push them back.

Some looters at the East Lake Street Target location were seen walking out with televisions, rugs and other items from the store. Other looters were seen at a tobacco store, a Dollar Tree and a liquor store. Additionally, Cub Foods and an AutoZone is being looted as well.

The AutoZone was set on fire as of 9:30 p.m. It could be seen burning on Chopper 5 video.

A source has confirmed to KSTP that the city requested support from the National Guard late Wednesday night to combat the ongoing violent protests.

A few nights later on the 31st of May, it was Washington’s turn. Now this really did look like a violent insurrection, as opposed to using an unarmed Trump supporter for short-range target practice:

An area of a few blocks around the White House was thick with smoke. A fire was started in the basement of the parish house of St John’s church, which since 1816 has been the “Church of the Presidents”. Every president from James Madison on has worshipped there. The DC fire service got there quickly and are reported to have put it out.
Around the corner, however, a few protesters smashed the plate glass window front of the AFL-CIO Union federation headquarters and someone started a fire in the lobby. A couple of bystanders tried to dissuade them, shouting that the “unions are on our side” but to no avail. Fifty yards away, on I Street, a car was burning and a group of six young men were running down the street and smashing the windows of every car they came across with metal baseball bats.

Yes cities were aflame, mobs running rampant. And it wasn’t just buildings and cars that were bearing the brunt. Steve Sailer at Taki’s has conclusively proved that thousands died as a direct result of BLM:

The results are now in on The Establishment’s vast gamble of declaring 2020 to be the year of the Racial Reckoning. Did sacralizing Black Lives Matter as our culture’s highest value even succeed at saving black lives?

My new data shows that elites’ frantic push since Memorial Day for Diversity-Inclusion-Equity (DIE) got thousands more Americans murdered in 2020 than in 2019.

America’s culturally influential have a lot of blood on their hands.

Yes, 2020 was the Ferguson Effect on turbo-drive, and it wasn’t just “unimportant, trivial” White people like Ashli Babbitt that were being thrown into pit, but those of our ever-so-precious Blacks. Sailer’s estimate of additional Black lives lost due to BLM activity runs into the thousands, making BLM 2020 equivalent to Pearl Harbor 1941 and Word Trade Center 2001, but almost entirely focused on Black Americans. Yet, we are supposed to hyperventilate and shut down freedom because one unarmed Trump supporter had the audacity to get herself gunned down by a Federal cop!

But what about Jack? Back in 2020, when cities were burning and the murder rate in Black neighborhoods skyrocketing, what was the Twitter CEO up to?

Answer: he was seeing how much “small change” he could give to promote the chaos and violence: 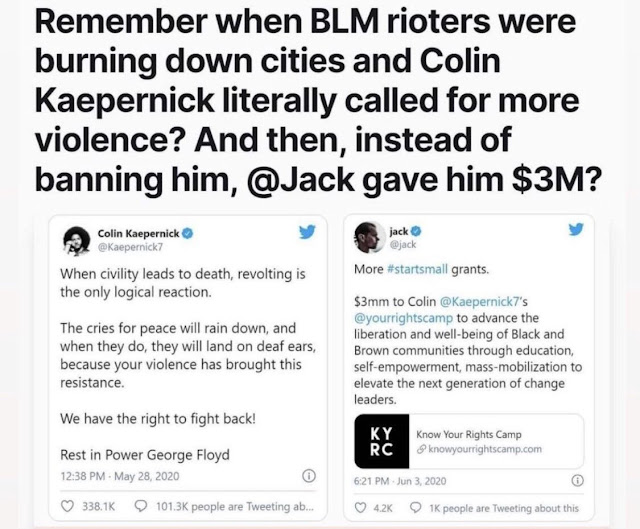 Colin Kaepernick used the word “fight” in the above tweet on the 28th of May, at the exact moment when it literally meant setting Minneapolis aflame and doing what you could to kill, maim, or injure cops. Then a few days later, after Kaepernick’s call to arms had played a major part in the riots spreading across the nation, Dorsey proudly announces that he is rewarding him by dropping $3 million into his lap. And this is the sanctimonious sh*t who is preaching to us and deplatforming a duly elected President for “incitement to violence” even though Trump (a) never told his supporters to storm the Capitol and (b) quickly denounced those who had committed crimes by doing so.

According to Dorsey and all the other deplatformers, Trump’s real “incitement to violence” is simply his unchanging belief that the 2020 US Election was carried out in an extremely dubious and underhanded way, which seems fair enough. That is exactly the thing they don’t want anyone to mention.

It couldn’t be that they are trying to hide something, could it? Possibly a collective crime that they are all implicated in, and which would lead to serious jail time?

Woke Big Tech has either committed the cardinal error of believing its own propaganda and engaging in an act of blind self-destruction by deplatforming Trump, or else it has made the fatal error of revealing that it has something extremely big to hide, like the stealing of an election. Already there have been interesting revelations from people like Michelle Malkin about the ways that Big Tech made its influence felt. That may be only the tip of the iceberg.

History will show that in 2021 tech giants like Twitter and Facebook were earnestly engaged in digging their own graves, while also laying the foundations for their free-speech competitors to overtake and supplant them.

Reposted with permission from Affirmative Right