This may sound counter-intuitive because the petty divisions in present day society have been amplified beyond all sense of reality. The fact is that — and I mainly referring to the UK here — there has never been more political unity than there is now.

Try slipping a piece of paper between the positions of the Labour and Conservative Parties or — Scottish ‘independence’ aside — these two parties and the SNP.

The problem, however, and the one that we are all aware of, is that we live in a time that should be extremely polarised and divided because so much is toxically wrong with our societies and civilisation.
The latest emblem of this at the moment is the forthcoming European soccer championships, in which the England team is all set to take a knee for “Black Lives Matters” in Every. Single. Game.
Here is Brendan O’Neill at Sp!ked, an online magazine that likes to pretend it is the friend of working class Whites:

…taking the knee is now little more than an elitist provocation. It has become a way of goading working-class football fans. This is the footballing elites – cheered on by the media class, the political establishment and the Twitterati – reprimanding the masses in the stands for their presumed prejudices and idiocies. The bent knee is yet another weapon in the never-ending culture war on the oiks.

O’Neill is a former Marxist, or more correctly a former open Marxist. I suspect he is probably a closet one now, having realised that being an open Marxist is just as big a turn off as being a fan of the Austrian Painter.

Sp!ked, by the way, used to be called Living Marxism. On the surface of it, O’Neill is channeling the dominant idea in modern Britain — namely the idea that race and identitarianism are non-starters and that we already live in a post-racial society. For him it’s more about class, but he only seems to mention this to de-emphasise race because “…really, you shouldn’t be hung up on that.”
But race is the fundamental reality in this case. The fact that constant efforts are being made to deny this is proof positive that it is.
But back to the England football team, the real reason that the team takes the knee is a very simple one.

It is not due to “all those turbo-smug NuFootball scribes on the broadsheets,” as O’Neill claims. No, it is instead due to the fact that the England team is two-tone team.

I would not even call it multi-racial. It is simpler than that. It is Black and White, and the Blacks in the team are convinced that there is such a thing as White racism, racist cops, and that the only way to make “Black Lives Matter” in America, England, and the World is to constantly bang on about it. 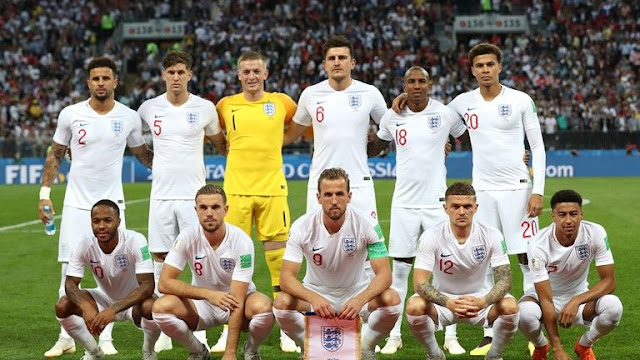 Only constant kneeling to a Black criminal and Marxists can keep this together
Anybody saying, “Wasn’t Floyd just some drugged-up thug?”, “Dude, all lives matter!”, or “Can we leave off the constant kneeling in front of empty stadiums? It’s pissing off the fans,” threatens to split the England team right down the middle.
Yes, thanks to race, and especially the “racial asymmetry” of Blacks and Whites in British society — despite all efforts to “level up” the races — England, both the country and the football team, lacks unity. Both are tenuously held together by the fraying threads of constant “woke” propaganda.
Those wishing to know more about the concept of “racial asymmetry” could do worse than check out Colin Liddell’s excellent “The Asymmetry of America.”

In my time the “woke” messaging pumped out in the UK has taken on North Korean proportions of propaganda, rendering almost any TV commercial or program on the BBC unwatchable.

White England players simply want to be in a successful footballing unit. Through their conditioning in two-tone Premier League teams, they know that this involves taking the knee not with their Black colleagues but to them.