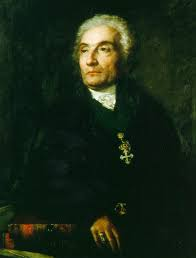 Note: Below is my article I originally wrote in French for the French-Breton website of the European Identitarians, Breizh-Info.

To each of us his own author, to each of us his own interpretation of the author’s work. For several reasons I chose for our discussion today a Savoyard writer and philosopher Joseph de Maistre. Maistre was a contemporary of Napoleon, although he barely ever mentions Napoleon in his work. He was also a disciple of the Enlightenment, although he was its fiercest opponent. All of us must therefore ask ourselves a question; well, what does Maistre have to do with us and how relevant is he to Europeans living now in the liberal System? I will briefly examine Maistre’s beliefs and also discuss whether he can be useful in understanding the dominant ideas of our time. Can Europeans still use portions of his teachings in the face of coming catastrophes? As to my choice of this author, there is also a personal side to it.  Understanding and interpreting any literary work often depends on the mood and character of the interpreter. Being by nature inclined towards cultural pessimism and being skeptical of the idea of progress, it should come as no surprise that I chose Maistre and his criticism of liberal happy tomorrows.  Moreover, let us also recall that this year marks the bicentenary of his death.

First of all, we must recall that Maistre’s political ideas are closely linked to his ultra-Catholic and Ultramontane beliefs, as well as his unshakeable belief in the iron fist of divine Providence. Being cursed by Original Sin, the human species, from birth onwards, is doomed to eternal Evil, as well as to being a victim of ceaseless suffering. Man cannot escape from Evil even if he is good, even if he considers himself a virtuous man, and even if he boasts of never having done any harm to his fellow man. On the contrary, the more virtuous a man is, the more likely he will be exposed to Evil, which Maistre refers to as “hereditary fault.”:  “On the other hand, it is equally possible that a man tortured for a crime he did not commit really merited punishment for an absolutely unknown crime.” [i]

Consequently, following our gratuitous birth we have irrevocably “fallen into time” —the expression coined by Emile Cioran, a prominent French-Romanian doomsday philosopher whose own work was profoundly inspired by Maistre. As a result of this Fall, all of us, without any exception, are toys of reversibility—that is to say, we are meant to atone not only for the faults and defaults of our distant ancestors, faults which they may have committed without their prior knowledge of it; but we are equally obliged to atone for crimes of those who are harming us now, and even those who had harmed either us or others, thousands and thousands of years before we were born, and whose names we will never know.

Maistre reminds us that “evil has sullied everything, and all of man is nothing but sickness.”[ii] Therefore, any pursuit of earthly happiness falls short—a pathetic endeavor doomed to failure; for he who refuses to suffer is not worthy of being called a human being.

Examples of perpetual Evil abound. Indeed, it suffices to have a quick glance at Europe’s political past. European history has been a long trajectory of conflicts, civil wars, violence and cataclysms. Therefore, a world improvement, or craving for a world ruled by reason, so much praised by the eighteenth-century encyclopedists, can never be attained.

Unhappily, history proves that war is, in a certain sense, the habitual state of mankind, which is to say that human blood must flow without interruption somewhere or other on the globe, and that for every nation, peace is only a respite. [iii]

The cult of Reason, installed by the French revolutionaries as a new secular religion, including their new Goddess of Reason, turned out to be a great historical swindle.  Subsequently, this cult resulted in the escalation of violence between individuals and between nations, as seen during the Bolshevik revolution in Russia a century after the death of Joseph de Maistre. Contrary to Jean-Jacques Rousseau and his ramblings about “the noble savage” and his beliefs in the alleged freedom of man at birth, authority always precedes reason and not the other way around. Man becomes aware of his reason, that is, his capacity to think and to reason, only within his family, his tribe, his clan, and his people, guided by wise men and their sense of tradition. The abstract reason of scientists and savants, as revered by the French revolutionaries of the eighteenth century and their liberal-communist offspring of the twentieth century, and later on their multiculturalist and globalist successors of the twenty-first century, is a giant hoax which, under the veneer of “human rights,” “multiculturalism,” and “tolerance” only augur new massacres. As a good connoisseur of classical languages ​​and modern European languages ​​of his time, during his lengthy dialogues in the course of his long walks along St. Petersburg waterfronts, Joseph Maistre was able to foresee the looming danger of the Jacobin doubletalk which was later launched by Bolsheviks and which is common today amidst the new world superclass based in Brussels and Washington DC.

But there is no such thing as ‘man’ in this world. In my lifetime I have seen Frenchmen, Italians, Russians, etc.; thanks to Montesquieu, I even know that one can be Persian. But as for man, I declare I’ve never in my lifetime met him; if he exists, he is unknown to me. [iv]

In hindsight, this passage may help us better understand the dissolution of the Soviet empire and the emergence of Ukraine and other nations whose national aspirations few knew about earlier. The same was true for the Croats and Slovenes during the dissolution of multicultural Yugoslavia in 1991.  All seems well when the preaching is about man-in-the-abstract; however, once the crisis starts, each of us, even the least nationalist-minded person, knows very well which family, i.e., ingroup he must relate to and in which language he will demonize his now-enemy neighbor. Worse, the ideas of progress and their great optimistic effusions about the best of all possible worlds, as envisaged by the philosophers of the Age of Enlightenment, such as Rousseau, inevitably lead to a new round of revolutions with their processions of massacres and sufferings. The bloody French Revolution, of which Maistre was a prime witness, was only the beginning of the Evil willed by divine Providence. If  Maistre had lived in the twentieth century, his words about the Bolshevik revolution in imperial Russia of 1917 would have sounded even more convincing.

Hence, if each revolution produces Evil, why does God allow it in the first place? Is this a divine attempt to test mankind, or is it a scam originating in a monotheistic religion of the Middle East? Maistre champions monarchical authority and the Inquisition as the sole remedy; in other words, he praises the regimes which until recently have been branded as “muscular regimes.” However, one only needs to think about the wars of religion in sixteenth-century France or the Thirty Years’ War in seventeenth-century central Europe to realize that their violence was not less than that of the Jacobin Revolution condemned by Maistre. Nor does his choice of placing government in the hands of all-knowing papists and Jesuit teachers inspire confidence.

It belongs to prelates, to noblemen, to great officers of the state to be the depositories and guardians of saving truths, to teach peoples what is good and what is bad, what is true and what is false in the moral and spiritual orders. The others have no right to reason about these sorts of things. They have the natural sciences to amuse them.[v]

Should we therefore leave it to Jesuits, to papists, and to the Catholic clergy to reestablish order in Europe and preserve the simulacrum of our small happiness? Out of the question—at least for the minority of free thinkers still remaining. In view of the pro-migration homilies of the actual pope and his high clergy in Europe and in the United States and their multicultural statements in favor of Afro-Asian migrants, there is no longer any need for communist commissars. Maistre himself would be shocked by his own ecumenical logic which has now yielded a worst-case scenario emerging daily when observing papal pronouncements. Two hundred years later, Maistre’s great disciple and admirer, Emile Cioran, also a champion of the Fall into Time, albeit pagan given his vision of the sacred, rightly warned us that we must henceforth expect nothing: neither from men nor from gods. [vi]