As crime rates soared across the country in 2021, a Fox Business survey conducted at the end of the year found almost 8 in 10 registered voters  (77 percent) are “extremely” or “very” concerned about the surge.

The only issue more pressing than the spike in crime rates in major cities, is inflation (84 percent “extremely” or “very” concerned). Voters are also troubled, to a slightly lesser degree, about taxes (71 percent), the deficit (69 percent), coronavirus (68 percent), and being able to pay bills (63 percent).

In this brief article I am going to tell it you straight, limiting my discussion to the top two concerns of Americans: inflation and crime. I promise not to say one word about the Afghan fiasco, Covid 19 and the new strains, China, the broken US border, political corruption, spiraling taxes, supply chain problems, self-inflicted energy shortages, massive propaganda in all levels of American education, or the relentless propaganda from the mainstream “news” media. I don’t want my readers feeling ill or depressed before they finishing reading.

US Economy: Historic Highs in Inflation and Deficit Spending

As James Carville once said “It’s the economy, stupid” – and so it is. Since the Biden election, inflation rates have skyrocketed and are double what the Fed admits, higher than anything in our history (including the Carter years), once recently contrived deceptive inflation rates are re-calculated more honestly.

Recall that the consumer index doesn’t actually measure your cost of living. Rather the CPI is calculated by assigning relative weight to different categories of goods, while excluding important consumer realities, like the price of food and energy, etc. So the CPI rose 9.4% but the price of durable goods jumped 14.9%, the fastest ever going back to 1957.

Also, the CPI sets price adjustments for the US Government which has a definite reason to report a lower number. Bottom line: the CPI does a very bad job of measuring how much it actually costs to live in this country. Rather than relying on a clearly biased, one-size-fits-all index, ask yourself, what does it cost you to live compared to what it cost you a year ago?

Is your inflation really up 20%?  If most of your expenses are gasoline, groceries, new or used housing costs, air travel, rental cars, or new or used cars, then yes. Oh, you want to heat your home, then yes again. Did you want to hire someone? Then yes (if you can find anyone who wants to work). Your inflation depends on what you purchase and where you live and may be different than mine.

Major news sources have reported the following figures since Biden was elected:

Your grocery bill is certainly up double digits. Examples of national averages:

Here are just a few of the other rising prices under Biden at the end of 2021:

According to the University of Pennsylvania’s Wharton School Bidenflation will cost families an additional $3,500 this year, impacting low-income families the hardest. In addition we also face widespread shrinkflation, a term economists use for the stealth shrinking of consumer products so that they appear to cost the same as they did, but in fact, do not.

Of course opinions vary on the woes of our current inflation. 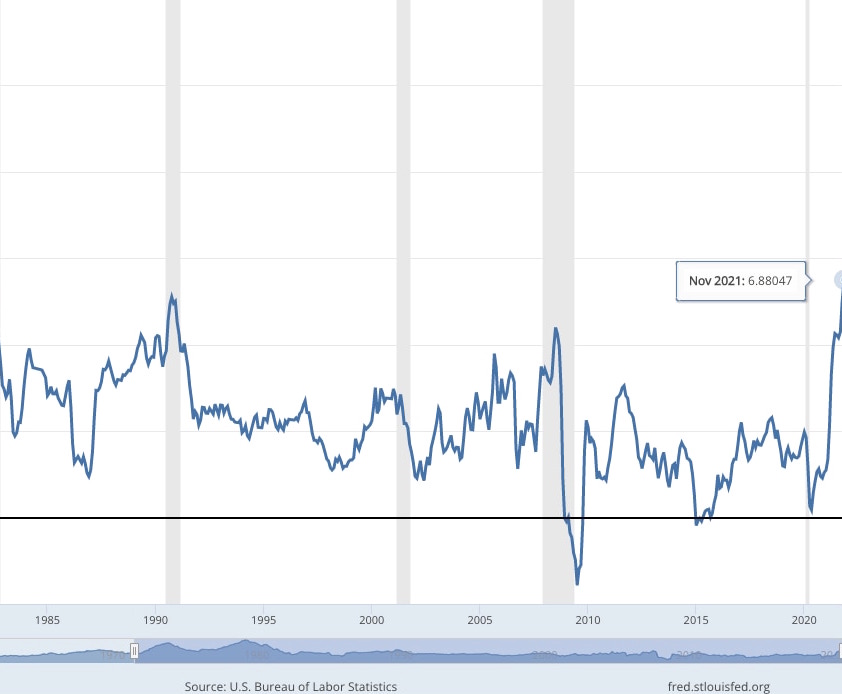 On a recent broadcast of NBC’s “Tonight Show,” Biden said that part of the issue with the downward spiral of his approval ratings is that “people are getting so much inaccurate information to them. The truth is, the economy’s growing more than it has at any time in close to 60 years.”

“The consumer price index measures the downside of federal economic policy. So let’s say you printed too many U.S. dollars. You wanted to fund useless programs and pay off your donors. Now, if you did that, you would devalue your own currency. You would cause inflation over time. You would impoverish your own population. Those would be the effects. But of course, you would want to hide those effects. You instead want to tell everybody that thanks to you, the economy is great, and the consumer price index allows politicians to do that.”

Concerning the economy, 60 percent of voters disapproved of Biden’s management. “On personal economic issues, voters are even more likely to criticize the president. Some 72% disapprove of his handling of the price of everyday goods, while 66% disapprove of his efforts to help their wallets,” (CNBC, 1/3/22)

The U.S. trade deficit, wherein the cost of imported goods exceeds the value of exported goods, “mushroomed to a record in November” and will likely continue for the duration of the coronavirus pandemic.

The goods trade deficit widened last month by 17.5% to $97.8 billion from $83.2 billion in October, Census Bureau data showed. That exceeds the previous record deficit set in September of $97 billion. Imports rose by 4.7% with industrial supplies leading the way with an increase of $5.7 billion to $63.2 billion, followed by consumer goods rising by $2.9 billion to just shy of $67 billion as retailers rushed to fill store shelves ahead of Christmas. Both were record highs.

Goods exports, meanwhile, declined 2.1%, with weakness across the board outside of a 4.3% increase in food exports. The drop was led by declines of $1.4 billion in industrial supplies and $1.3 billion in capital goods.

According to Market Watch, the U.S. “is poised to surpass a record set in 2006 and incur its biggest international trade deficit ever.” Economists voiced their discontent with the bleak situation on Twitter, noting the trade deficit will hurt GDP growth.

The Nov. U.S. merchandise trade deficit surged to $97.8 billion, a new all-time record high. The deficit shattered expectations of $86 billion, and is a 17.5% higher than the prior month. This horrific data proves the U.S. economy is a complete disaster. It has never been weaker!

“We’re ending 2021 with what one analyst described as the strongest first-year economic track record of any president in the last 50 years. Let’s keep the progress going.” 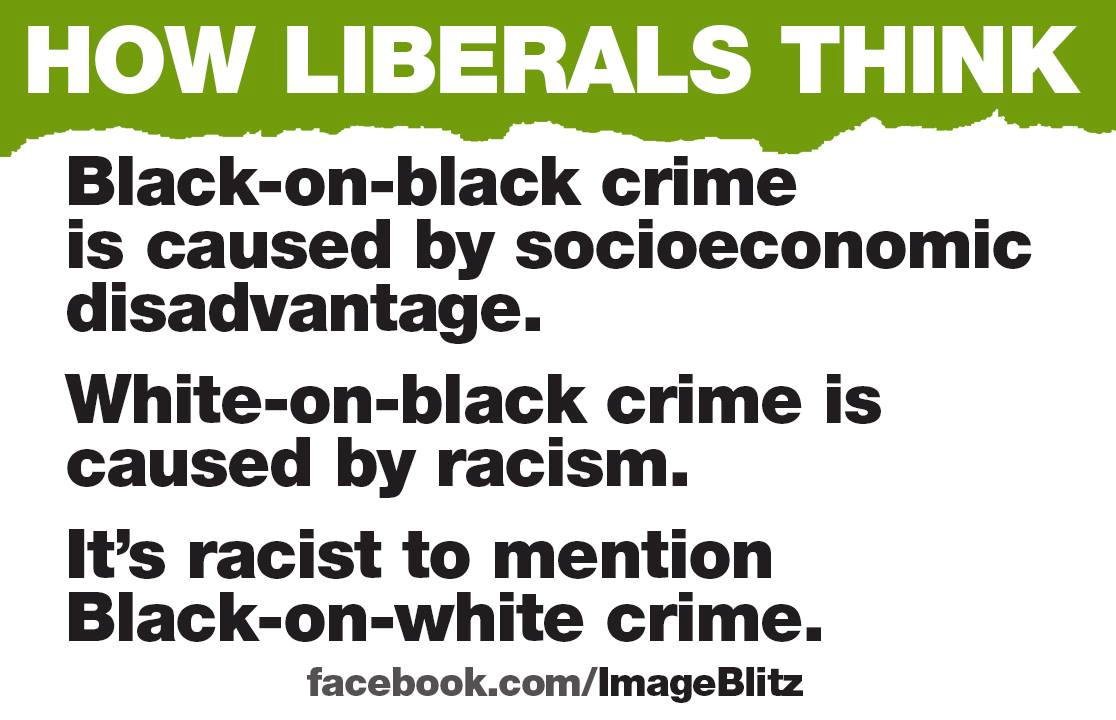 All of these cities are led by Democratic mayors with crime-prone Black populations unleashed by the current racial reckoning.

This is the same trend that we saw the previous year when the U.S. murder rate rose 30%, according to FBI data – the largest annual increase on record. At least 12 major US cities broke homicide records in historically bloody 2020.

In 2021, robberies and assaults were also on the rise, and retailers in major cities across the country reported an uptick in organized smash-and-grab crimes during the busy holiday shopping season.

Once peaceful Minneapolis, epicenter of the George Floyd madness, became a significantly more violent and dangerous place to visit and live in 2020.  The spike in violent crime in the 2020 crime statistics can hardly be overstated. It confirms what too many victims and residents already know from personal experience or live in fear of on a daily basis, namely, that they stand a greater chance than ever of becoming one of those statistics.

Moreover, these crimes are spilling into Minneapolis’ suburbs, putting the neighborhoods “under attack from mobile criminals,” one local mayor said. “Our town, and our neighboring towns, have had their security and serenity under attack from mobile criminals who are coming into Edina and other nearby communities to steal private property and in some cases injuring people who resist or assist a victim,” Edina Mayor Jim Hovland said in an email to residents of the town Sunday: “Edina residents have become angry and fearful. The peace and tranquility of our community has been disrupted. At a time when we should be celebrating peace in our families, communities and places of worship, we all worry what each day will bring in the way of criminal activity.”

Could all this have anything to do with bail reform, lack of arrests, and fall out from police retirements and resignations following 2020’s nationwide calls to defund the police?

“Nobody’s getting arrested anymore,” retired chief of detectives for the New York Police Department, Robert Boyce, told ABC News. “People are getting picked up for gun possession and they’re just let out over and over again.”

“America’s most beautiful cities are indeed being ruined by liberal policies,” Republican Rep. Dan Crenshaw said on “Fox & Friends” last week of cities experiencing crime surges. “There’s a direct line between death and decay and liberal policies. The criminals laugh in the back of a police car because they know that they are going to be out the next day back to committing crimes.This is a problem for people who actually pay taxes and who live there. And they are absolutely ruining America’s greatest cities, and we should be outraged about it.”

The spikes came after there was a 45% increase in the police retirement rate and a nearly 20% increase in resignations from officers in 2020-2021 compared to the previous year, according to a June survey from the Police Executive Research Forum.

Finally, according to the US Department of Justice, the murder rate for blacks was almost 8 times higher than whites, and the victim rate 6 times higher. Blacks accounted for 52.5% of homicide offenders from 1980 to 2008, with a much larger population of whites 45.3%, and “Other” 2.2%.