-The man formerly known as Kanye West held an impromptu interview in which he recites a list of Jewish media executives and owners.

The list is apparently from Daily Stormer (2013) but I hear there are other similar-looking versions floating around the internet. I can’t vouch for its accuracy but the general idea is certainly true. In the 2002 Preface to the Second Edition of The Culture of Critique (p. xlvi and following), a listing and discussion. 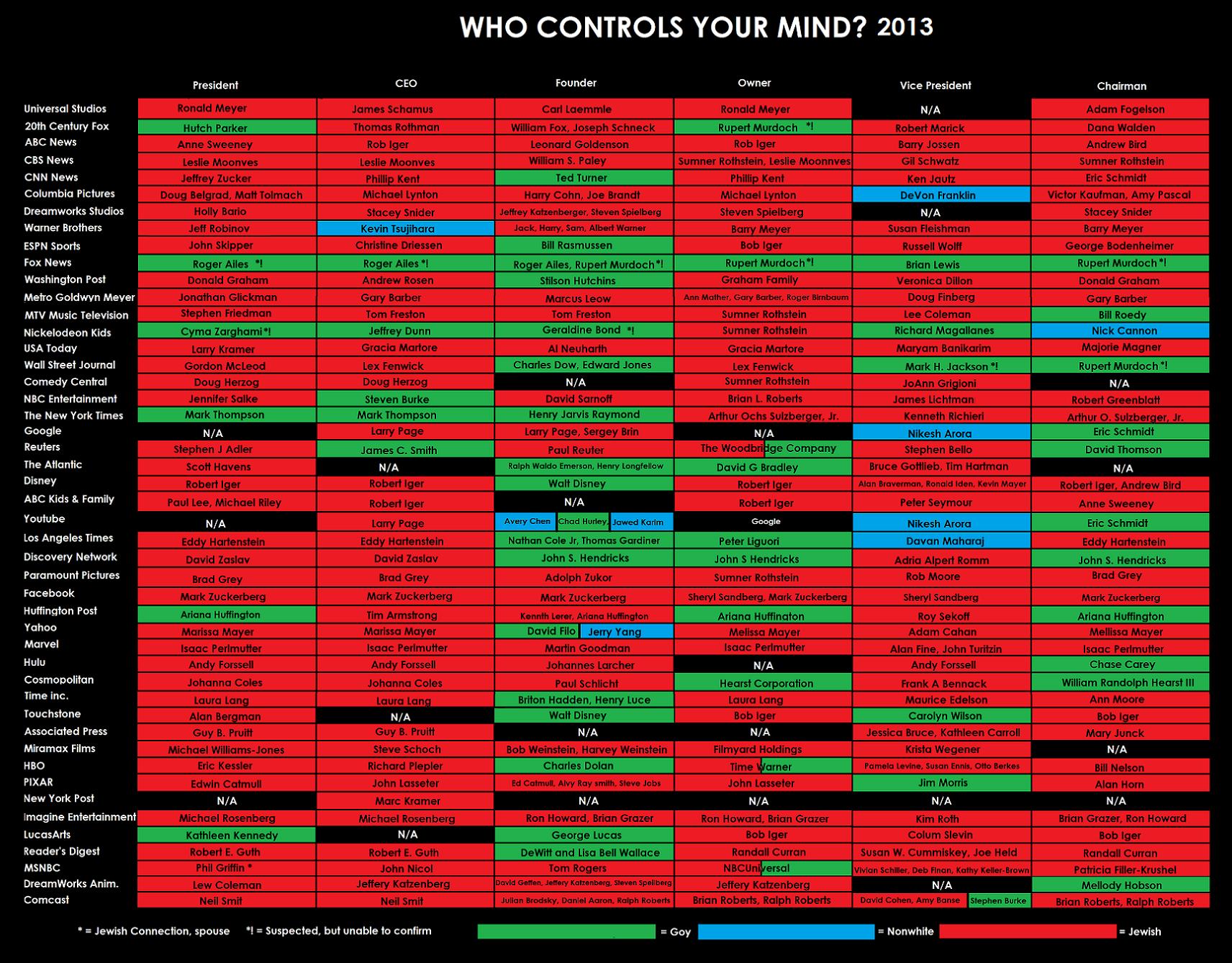 After what seems like an awkward silence from the questioner who likely did not anticipate such a detailed response, the questioner goes to  Plan B, saying, “Do you think they stick together when they heard about what happened?”—as if to suggest that even if Jews have a predominant place in the media, that they don’t have any common beliefs or act together.

And yet, as is so often the case, that is pretty much what happened despite the apologetic suggestion that Jews do not have any common interests or opinions.

The whole thing blew up after “super agent” Ari Emanuel wrote an op-ed in the Financial Times on October 19.

In a blistering op-ed for the Financial Times, which was picked up by The Hollywood Reporter, super-agent Ari Emanuel — whose client list includes Martin Scorsese, Denzel Washington, Robert Downey Jr., and Oprah Winfrey — is urging his fellow entertainment industry power brokers to cease all dealings with the man currently known as Ye.

In the piece, Emanuel, who is the CEO of Endeavor, urged corporate behemoths like Apple, Adidas, and Spotify to stop working with West, as they were only giving him a wider platform from which to spread his hate speech. Emanuel also urged Parler’s parent company to not go through with any deal to sell the network to the former Mr. Kim Kardashian.

“West is not just any person,” Emanuel wrote. “He is a pop culture icon with millions of fans around the world. And among them are young people whose views are still being formed. This is why it is necessary for all of us to speak out. Hatred and anti-Semitism should have no place in our society, no matter how much money is at stake.”

Emanuel’s essay referenced a 2006 piece he wrote for HuffPost in which he said entertainment companies should stop working with Mel Gibson after the antisemitic remarks he made that year during an arrest for drunk driving. In his new op-ed, Emanuel explained that he has since recommended Gibson for roles following the actor’s public apology and “commitment to understanding the consequences of his actions,” and that he would be open to helping West do the same.

Given what has happened, West is quite correct to say that he has been proved right on the Jewish  power being able to destroy people (3:46). As Joe Sobran wrote in 1996:

The full story of [Pat Buchanan’s 1996 presidential] campaign is impossible to tell as long as it’s taboo to discuss Jewish interests as freely as we discuss those of the Christian Right. Talking about American politics without mentioning the Jews is a little like talking about the NBA without mentioning the Chicago Bulls. Not that the Jews are all-powerful, let alone all bad. But they are successful, and therefore powerful enough: and their power is unique in being off-limits to normal criticism even when it’s highly visible. They themselves behave as if their success were a guilty secret, and they panic, and resort to accusations, as soon as the subject is raised. Jewish control of the major media in the media age makes the enforced silence both paradoxical and paralyzing. Survival in public life requires that you know all about it, but never refer to it. A hypocritical etiquette forces us to pretend that the Jews are powerless victims; and if you don’t respect their victimhood, they’ll destroy you. It’s a phenomenal display not of wickedness, really, but of fierce ethnocentrism, a sort of furtive racial superpatriotism.

West is obviously not on our side but he is certainly to be praised for publicizing Jewish power—and not backing down in the face of grievous financial damage. Who among us has lost so much—at least $1.5 billion (maybe 2) and counting (at least 3/4 of his fortune)—by standing up for what they regard as the truth?