One result of the triumph of the culture of critique is that Americans must endure constant defamations against the pre-1965 culture of America. A good example is the defamation of Henry Ford — an icon when I was growing up but now known mainly as an anti-Semite from America’s dark past.

A recent rather egregious example of Henry Ford defamation is an article by Edwin Black promoting his book Nazi Nexus: America’s Corporate Connections to Hitler’s Holocaust. Black claims that

To purvey this new brand of Jew hatred [i.e., “political anti-Semitism”] to the world, Ford purchased a failed newspaper, the Dearborn Independent, which serialized the Protocols for 91 weeks. His company then published the series as a book, The International Jew. Using the techniques of mass production, Ford was able to escalate the Protocols from a negligible, randomly circulated irritant to a national sensation of 500,000 copies. Devoting the national sales force and the assets of the Ford Motor Company to the task made Henry Ford the first to organize political anti-Semitism in America. Indeed, he was the hero of anti-Semites the world over.

The problem with this is that The International Jew is far more than a serialization of the Protocols. Indeed, it is not a serialization of the Protocols at all. Rather, it is a series of journalistic articles (of uneven quality) on Jewish issues written by two of Ford’s employees, Ernest Liebold and Billy Cameron.  Liebold was a college-educated bank president before he became Ford’s personal secretary and alter-ego.  Cameron was a journalist who subscribed to an early version of the Christian identity movement that believed the Anglo-Saxons were descended from one of the lost tribes of Israel.

Black’s zeal to discredit Ford even leads him to claim that TIJ was then distributed in Germany where Hitler read it at least two years before writing Mein Kampf.The proof of this is that Hitler refers to the Protocols in Mein Kampf.

The logic seems to be that Hitler never would have heard of the Protocols except for the nefarious work of Henry Ford who was responsible for distributing it in Germany. No Henry Ford, no Holocaust.

This is ridiculous. The Protocols had been circulating in Germany since around 1918 — beforeTIJ was written. Hitler certainly didn’t need Henry Ford to be aware of the Protocols — nor were the Protocols the source of Hitler’s anti-Jewish attitudes. And, as I noted, TIJ is much more than the Protocols.

If this is the sort of scholarship that typifies Black’s book, one can only be amazed that it found a publisher at all. Yet the book’s website has blurbs praising the research behind the book. According to Michael Hirsch of Newsweek, Black performed “exhaustive research.” Adrienne Miller of Esquire writes: “Edwin Black is a dangerous man. He tells us things we don’t want to hear, like: ‘The scientific rationales that drove killer doctors at Auschwitz were first concocted on Long Island.’”

But of course people like Hirsch and Miller do want to hear what Black has to say because it conforms entirely to their world view. In that world view, anti-Jewish attitudes of people like Henry Ford are nothing more than outlandish conspiracy theories based on forged documents. (The US Holocaust Memorial Museum describes TIJ as “an Americanized version of the Protocols,” suggesting that Black’s views are entirely mainstream among Jewish intellectual activists.)

How should we characterize TIJ and its relation to the Protocols? The following is based on my review of TIJ; interested readers should consult the entire review.

TIJ at times exaggerates Jewish influence and Jewish unity, and it often expresses its ideas crudely. (Nevertheless, I rather doubt that its standards of journalism could be any worse than Black’s.) The following summarizes points made in TIJ that are supported by mainstream research on the history Jews of that period.

TIJ would have been quite sympathetic to the idea that Jewish behavior is what I call a group evolutionary strategy. TIJ sees Jews as an ethnic group, not a religion. For example, as part of its argument TIJ quotes Supreme Court Justice and Zionist Louis Brandeis that “the percentage of foreign blood in the Jews of today is very low. Probably no important European race is as pure.”  In other words, Jews saw themselves as an racially pure group. Despite this,TIJ comments on the Jewish campaign to have themselves viewed as a religion, not an ethnic group in the US.

The group evolutionary strategy idea also proposes that eugenic selection for intelligence and group loyalty was an important component of historical Judaism (see below). Jewish intelligence and ethnocentrism were well recognized by TIJ: “The international Jew . . . rules not because he is rich, but because in a most marked degree he possesses the commercial and masterful genius of his race, and avails himself of a racial loyalty and solidarity the like of which exists in no other human group” (TIJ, 6/12/1920).

While far from perfect even as journalism, many of the points made in TIJ have substantial support given current scholarship. Obviously, despite the claims of Edwin Black and the USHMM, TIJ is not at all like the rather strange and unspecific Protocols.

The relation between TIJ and the Protocols requires some comment. TheProtocols presents a “theory” in which absolutely every aspect of modernism is explained as the result of a single, centuries-old overarching Jewish conspiracy to subjugate non-Jews.

In other words, TIJ acknowledged the need to back up claims about Jews and Jewish influence with actual evidence. This is a long way from how Edwin Black,Neil Baldwin, and the USHMM present it.

Ford eventually responded to Jewish pressure, abandoned TIJ, and signed an apology for his actions. The reasons for this remain mysterious. But he never changed his mind about Jews: In 1938, Ford received the Grand Cross of the German Eagle despite a wave of protest from the Jewish press. 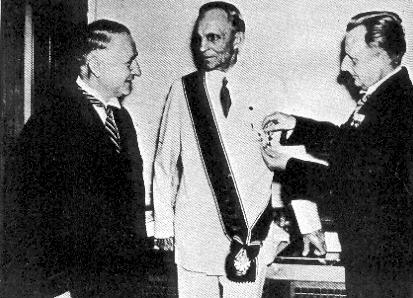 Henry Ford receives the Grand Cross of the German Eagle

Another part of Black’s world view is that eugenic theories based on scientific racism had the inevitable consequence of rationalizing gruesome experiments at Auschwitz and even the Holocaust itself. The “logic” is that eugenics leads to race science which leads to the Holocaust. This calls for a fuller treatment, but in closing I note only the following:

1. The logic behind eugenics is impeccable. In its classical form, itproposes that qualities such as health, intelligence, and moral character are socially valuable. Eugenicists were correct that these qualities are strongly influenced by genetics, and they argued that society can promote these qualities by policies such as discouraging reproduction of people with negative traits and encouraging reproduction of people with positive traits. Many of those who advocated eugenics were social radicals with utopian visions.

2. Eugenic theories played no role in the Holocaust. Hitler, like the writers ofTIJ, certainly did not believe that Jews were genetically inferior. Rather, he viewed them as powerful competitors with other groups, including Germans. And he correctly understood the importance of racial purity to Jews, stating in Mein Kampf “While he seems to overflow with “enlightenment,” “progress,” “freedom,” “humanity,” etc., he himself practices the severest segregation of his race.”

3. Jews have a long history of utilizing and explicitly advocating eugenics beginning in the ancient world. Eugenic practices are enshrined in the Talmud, including the injunction for wealthy men to marry their daughters to scholars and the need to scrutinize the family history of prospective spouses for signs of genetic diseases. With the rise of Darwinism, the eugenic practices of traditional Judaism were much discussed as an important ingredient in Jewish success.  Many Jewish race scientists in the pre-World War II era both in Europe and in Palestine believed that Jews were a master race and that they had become a master race by following eugenic marriage practices.

4. Eugenic practices have a respected place within contemporary Israel.Yael Hashioni-Dolev shows that Israeli geneticists and the Israeli public strongly favor eugenic practices. Israeli women are “heavily pressured to engage in selection of their embryos, or, in the ultra-Orthodox community, to marry according to ‘genetic compatibility.'” (Prof. John Glad’s website is an excellent source of information on this topic.) This can be seen as an aspect of racial Zionism that dominates contemporary Israeli political culture.

The strong Jewish opposition to eugenics in the West began with the Boasian school of anthropology — a prime topic of The Culture of Critique. Edwin Black carries on that tradition. But, as with other issues (such as ethnic nationalism), it’s pretty clearly a case of “do as I say, not as I do.”

And as is so often the case with scholarship motivated by a Jewish ethnic agenda, Black’s conclusions have little to do with the truth but everything to do with reinforcing Jewish world views — views in which Jews are moral paragons who are victimized by people like Henry Ford and the eugenicists.