Merlin Miller: Edge of Darkness is an important and timely political thriller that will keep you on the edge of your seat.  Originally produced as a British mini-series, this story has been modernized and set in Boston.  Director Martin Campbell, who helmed the original, as well as several recent hit films, including, Casino Royale, brilliantly executes with a cast and crew tailor made for their roles. 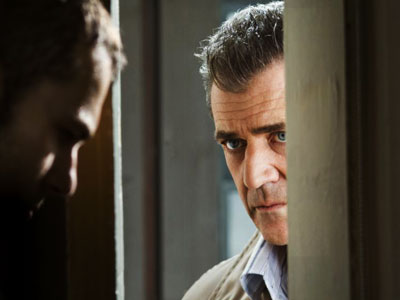 The story is about a veteran homicide detective, Thomas Craven, who must solve the murder of his own daughter, Emma (who dies in his arms), and the conspiracy that led to it.  As Craven, Mel Gibson is back with a performance that reminds us why he is one of the all time greats. He hasn’t been in front of the camera since 2002’s Signs, but what a return this is!  His powerful performance grabs and doesn’t let go.  Even though his intense blue eyes have been intentionally muted with wardrobe and lighting to create a disheveled and distraught character appearance, he still captivates.  As a widower, who has now lost his only child, Craven has but one goal left and that is to find and exact vengeance on her killers.

Initially believed to be the target himself, things don’t stack up for Craven and he discovers that his daughter led a life that he knew nothing about.  Throughout the film, use of memory flashbacks of Emma as a little girl, and apparitions of her lost spirit, provide love connections, which are beautifully and hauntingly effective.  The chemistry, between father and daughter, is wonderfully developed by Gibson and Serbian-Australian actress, Bojana Novakovic.  As a nuclear physicist intern, Emma worked for an energy and research firm that held government contracts.  She became aware of sinister efforts by her corporate employer (played with arrogant perversity by Danny Huston) to produce nuclear weapons that could be used and then blamed on Jihadists.  This future “false flag” operation had the secret support of elements of our own government.  Emma’s efforts to “do right” and protect our true national interests were betrayed by those she thought she could trust, including a US Senator.

As Craven investigates with increasing despair, he uncovers key parts of the conspiracy with the enigmatic assistance of a government clean-up agent (and assassin), Darius Jedburgh, wonderfully played by Ray Winston.  Although his delivery was difficult to understand at times, Winston’s understated performance is central to the story and his scenes with Gibson are riveting.  At one point, Jedburgh philosophically states to an inquiring Craven, “…you just never can connect A to B.”  Craven responds “How do you know?” to which Jedburgh replies “Because I’m usually the guy that stops you from connecting A to B.”  But Jedburgh is “terminal” (as he says “we all are”), and this takes him through a soul searching process, where he will ultimately be tested to either do his assigned job or do the right thing.  This is a decision many of our government servants may be asking themselves today.

The themes of honoring family (Jedburgh regrets never having had one and Craven has devastatingly lost his) and protecting our freedoms are tightly woven into this story’s tapestry.  A memorable and repeated line, “Everything’s illegal in Massachusetts”, speaks tellingly to current and historic patriots.  And Craven’s threat to the Senator, “You had better decide whether you’re hangin’ on the Cross, or bangin’ in the nails,” speaks to our unfortunate loss of faith and increasing corruption.

One aspect of the film that may undercut its effectiveness was a dependency on the ultimate honor and integrity of the media. In sympathy for a female reporter, who showed respect and was less predatory than others, Craven sent her Emma’s secret discs, which revealed the conspiracy.  If we still trust in the mainstream media, then it could be a satisfying ending.  Unfortunately, trust in media today is justifiably even lower than trust in our politicians.  But this reporter was local and working for a less controlled media, so perhaps truth can prevail.  This truth dependency is somewhat reminiscent of “Three Days of the Condor” in which the Robert Redford character’s survival rests in the possible publication of his story in the New York Times.  If we had our doubts then, what are we to think now?

The production credits for this revenge thriller are first rate, and give the film a realistic and gritty “film noir” quality.  The camera flows smoothly, with visual intensity, and the editing and scoring keep us on an emotional roller coaster.  With such a compelling script and top-notch performances, this film has broad commercial appeal, but also works on other important levels.  With its truth-seeking attitude and yearning for traditional values, Edge of Darkness, is an uncertain journey through evil and darkness.  And like Craven, Emma, and Jedburgh, we are left wondering if we, as a people and nation, can rediscover what is important and return to a world of light.

Merlin Miller (email him)  is a motion picture producer/director and founder of Americana Pictures.  A graduate of West Point and USC film school, he is building a quality alternative to Hollywood. His article, “Americana Pictures: Restoring the Dream” appeared in TOO in April, 2009.